It was recently brought to my attention that it's often difficult to find quality tower defense games on the Google Play Store, and since this is a subject I've yet to cover in a roundup in my three years at AP, I figured it's about time I rounded up the best TD games currently available, so that's what I've done. Below you'll find 15 of the best tower defense titles on Android. I've primarily ordered the list by the number of downloads on the Play Store, though I did place a personal favorite at the top since it's a recent release most people may not be familiar with. So if you're a colossal tower defense addict, get ready to discover the best titles available on the Play Store in 2019.

I wanted to start off today's tower defense roundup with a bang, so I have chosen one of my personal favorites, Lock's Quest. This is a fairly new release on the Play Store, though it is a port of a premium Nintendo DS game, which means there are no in-app purchases or advertisements in the Android release. What you see is what you get, and what you get is an enjoyable pixel-based tower defense game recently optimized for touch screen devices, and it's just as great as ever. Swamp Attack is a lighthearted affair, thanks to its goofy redneck theme, but don't be fooled, as this is also a competent tower defense title. There are 390 single-player levels to explore, and there are also 40 multiplayer levels for those of you that would like to face off against their friends and family. There's even a Quick Mission mode for anyone that simply wants to jump into a game during their downtime, which makes this a solid choice for those of you that game when on the go. Just make sure to watch out for the heavy monetization.

I'm pretty sure at this point most people are familiar with Plants vs. Zombies 2. In this popular sequel, you'll defend lawns throughout time and space against an assortment of zombies. The entire game is themed around the incredible flimsy pretense that your whacky neighbor lost track of his taco, and the only solution is to travel through time to find it. Luckily the gameplay is so easy to pick up that the ridiculous story can be ignored. More or less, if you enjoy tower defense games, you should definitely check out Plants vs. Zombies 2, but as always, make sure to watch out for the numerous in-app purchases stuffed into the game by Electronic Arts.

Defense Zone 3 HD is one of the more pragmatic tower defense games on the Play Store, thanks to its realistic settings and weapons. There are four separate difficulty levels on offer, which makes this a solid choice no matter your skill level, and thanks to the inclusion of eight different kinds of turrets, you'll never run out of options to take down your foes. This setup also allows for many different tactical strategies when playing, so if you're tired of the more linear tower defense games on the Play Store, Defense Zone 3 HD's varied choices are what you're looking for. Radiant Defense is an older release, but the developers are still updating the game, which means you won't have to worry about device compatibility for a seven-year-old release. As you can see, the neon-based graphics are very striking, and the core tower defense gameplay works as you would expect. There's a total of fifteen missions to work your way through, with over 300 waves of enemies to engage, nine upgradeable weapons to choose from, and three superpower weapons that can cause massive devastation. The game even works on the Nvidia Shield, which means controller support is included. Honestly, if you don't enjoy similar titles when they are filled with in-app purchases, Radiant Defense is one of the better choices in today's list. The Bloons tower defense franchise is a successful one, and thankfully the developer Ninja Kiwi hasn't lost its touch since the year-old Bloons TD 6 is just as great as the previous titles in the series. Sure, you're going to have to pay upfront, and there are a bunch of in-app purchases included despite this payment, but I have to say the title's newly-added co-op gameplay makes it all worth it. After all, it's not like you have to sink a ton of money into this game to play casually against a friend. So if you have a hankering for some enjoyable co-op tower defense gameplay, Bloons TD 6 is one of the more popular choices.

Defenders is a fantasy-themed tower defense game with impressive graphics, and it acquired more than a few fans when it was originally released on the Play Store in 2014. Defenders 2 is the sequel to that title, and it simply brings along more levels, a day and night weather system, intense online multiplayer, and a smorgasbord of tower types, enemy units, spells, and runes. While I can't say the monetization is all that great in this F2P release, if you choose to play casually, there's still a lot to like here. 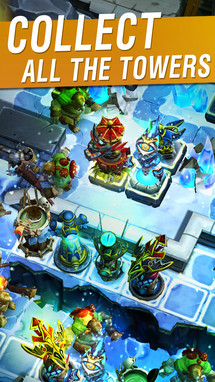 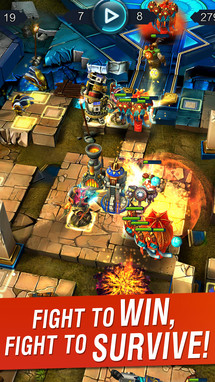 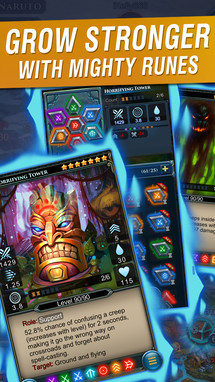 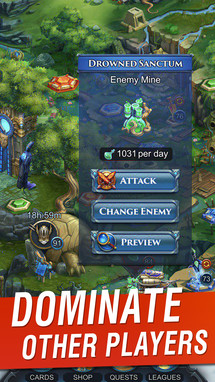 Kingdom Rush Vengeance is the latest release in the Kingdom Rush tower defense series, and it improves on almost every aspect of the previous titles, though sadly, this does not apply to the game's glaring monetization. Still, if you enjoy F2P titles, Kingdom Rush Vengeance has a lot to offer, such as 17 new towers, 19 stages, 10 heroes, 40 enemies, plenty of boss fights, tons of new powers, 30 separate upgrades, and 50 achievements. So as you can see, there's a lot of content here that should keep players busy for a good while. 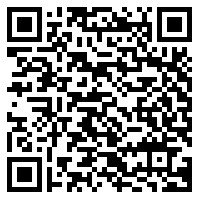 Iron Marines: RTS space battles comes from Ironhide Game Studio, the same publisher behind the Kingdom Rush series. This is a premium title, though there are plenty of in-app purchases included, as well. Luckily the balancing of the gameplay does not require these purchases unless you want to advance quickly, so they are mainly optional. What's unique about this title is that you can change the role of your troops on the fly, which adds an extra layer of strategy to the core tower defense gameplay.

Infinitode 2 is clearly the sequel to the lauded Infinitode tower defense game, and this time around, you can expect improvements upon just about every aspect of the original. This means you can expect a TD game fully optimized for mobile play, as well as 40 levels to work through along with tons of upgrades for your weapons. Unlike many titles in today's list, the graphics in Infinitode 2 are rather minimal, but they sure don't take away from the quality gameplay. On top of this, the monetization isn't that bad, so you won't have to worry about a plethora of in-app purchases like you would in the majority of games in today's roundup. Fieldrunners 2 is an older release from 2013, and while it would appear that the devs updated the game in 2018, the title currently suffers from a bug where you can't spend in-game currency. This means if you don't already own the title, you may want to wait for an update that addresses this issue. Sadly there's no option to pick up an older APK from sites like APK Mirror since this is a paid release, so we'll all have to wait for Subatomic Studios to fix the game. Until then, this title is probably only something you should attempt playing if you already own the game, which is a shame, as this is a quality tower defense release when it's working. Most people have probably not heard about Mini TD, but trust me when I say this is a quality release. The graphics offer a minimalistic appearance, but for me, that keeps things simple, so I can concentrate on placing my towers. It's also worth noting that this is a premium release that does contain a single in-app purchase, though advertisements are included. Luckily you can remove these ads through an IAP. There are 40 levels to explore with four types of towers on offer, which may not last players as long as some of the games in today's list, but at least you know you won't have to sink a bunch of money into the title just to progress. 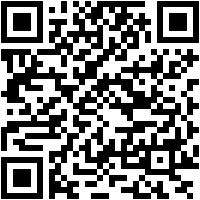 OTTTD : Over The Top TD

OTTTD is short for Over-The-Top Tower Defense, and I have to say I agree with the moniker. This game combines the classic action of a tower defense title with action-RPG elements that make for a hectic game of destruction. You'll still have to build and upgrade your towers, but you'll also command a squad of heroes for an extra layer of strategy. There are even a few boss fights in the mix, which should keep the unique gameplay from growing stale. Really, my only issue with this release is the fact that it's a paid title that also contains more than a few in-app purchases. 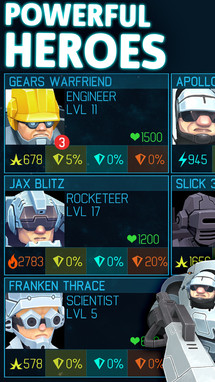 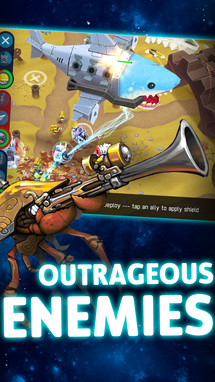 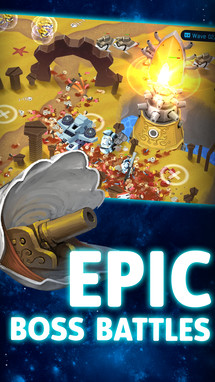 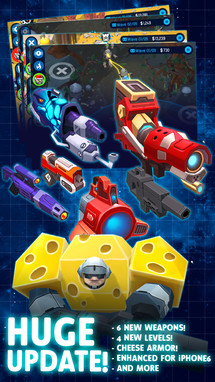 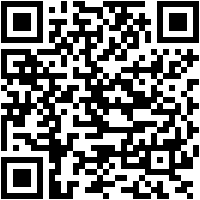 Element TD is another lesser-known TD title, but that doesn't mean it isn't worth playing. As you can see, the graphics are exceptional, and luckily the tower defense gameplay holds up. There are five maps to play on, and 40 enemy types to kill, not to mention, five separate difficulty settings. While this is one of the shorter experiences in today's list, the fact that it's a premium release that only costs $0.99 is a big win in my book. So if you're a fan of premium releases that forgo in-app purchases, Element TD is a great choice. Sky TD is an atmospheric release that contains adorable graphics, but don't be fooled, as this is also a hardcore tower defense game. There's 50 levels to play through, five types of towers with three levels of upgrades, not to mention an endless mode for those that would like to continue playing after the story is finished. It's also nice to see that the included in-app purchases only range up to $19.99 per item, which means this is a TD game that won't break the bank. 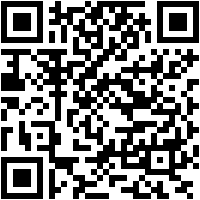 The McLaren Edition OnePlus 7T Pro is nothing like a racecar, but it sure looks cool