If you try to look for WhatsApp on the Play Store now, you're likely to find nothing. For many users, searching for the app's name only returns WhatsApp Business, and the regular Messenger app has disappeared from both the Installed and Beta tabs under My apps & games. It is still accessible under its listing's URL though.

The situation is curious and seems to be more of a Play Store bug, at least to me, than a real issue with WhatsApp. On my computer, searching for WhatsApp in the Play Store doesn't show the app, as seen in the screenshot at the top of the post. That would suggest the app has been delisted — i.e. it's live, but only for existing users who have already downloaded it. However, directly loading the app's URL works, even in incognito, which shouldn't be the case if it were delisted.

On my phone, I see WhatsApp in my installed apps, beta tab, and through a search. But several other users are reporting that they don't have it anywhere, despite it being installed. That's also not what usually happens to delisted apps. 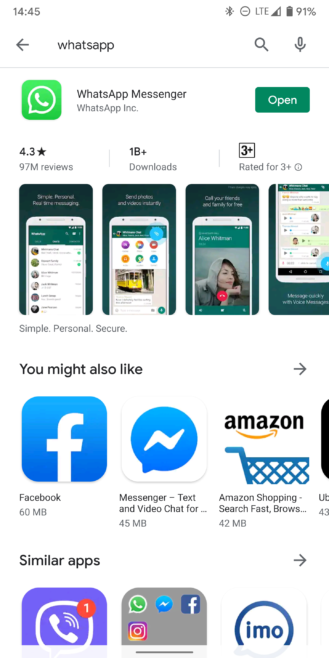 Left: What I see when I search for WhatsApp. Right: What our tipsters see.

It's a head-scratcher. It could be a mess up in the Google Play Console side of WhatsApp: maybe some developer changed the regional availability or device compatibility, even though that doesn't perfectly explain what we're seeing. It could also be a Play Store bug. Something similar happened to Instagram recently — another Facebook property, incidentally — but it was fixed after a day or two.

For now, if you already have the app, you needn't worry. Only updates might be momentarily unavailable. The only way you might be affected is if you're setting up a new device: If you don't find the app and the direct URL doesn't let you download the app, you may not be able to install it. In that case, APK Mirror can save you.

A WhatsApp representative told The Next Web that the app is back, though they didn't specify the reason for the disappearance. I can verify this on my end: the app is now showing up in search results on the web. If you're on Android, you may need to close the Play Store and re-open it.