If you're on the market for a good Android tablet, Samsung's Galaxy Tab S6, which is probably one of the best ones around, is currently down to just $430 at Best Buy. This is a significant markdown for a product that was just released, as it's $300 less than the MSRP. 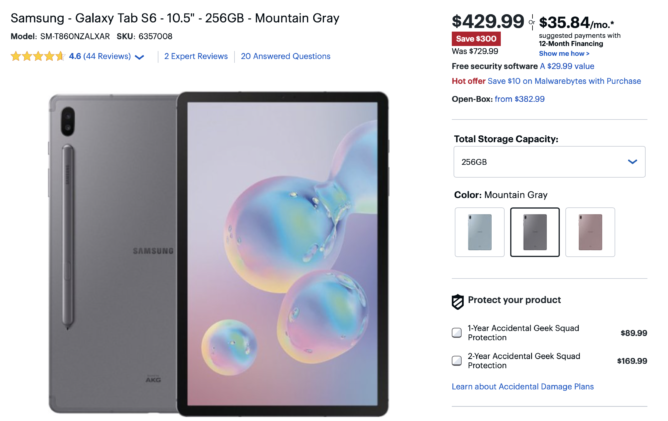 The tablet is powered by a Snapdragon 855 processor, 8GB of RAM, and comes with 256GB of storage and a microSD card slot. It also features a 10.5-inch OLED panel with a 2560x1600 resolution, as well as a fingerprint sensor hidden underneath the display. There are two cameras on the back, the first one being the 13MP primary shooter, working in collaboration with a 5MP 123-degree wide-angle sensor. On the front side of the device, there's an 8MP selfie camera, which you'll probably use more often than the rear ones. Most importantly, the tablet comes with a Bluetooth S-Pen, which can be recharged magnetically.

Unfortunately, only the Mountain Grey device is as low as $430, while the other colors will cost an extra $100. Interestingly, the 128GB version isn't discounted and is still selling for $650.