The extensively leaked Pixel 4 is only days away from its official unveiling in New York, and it's already receiving purchase incentives from at least one retailer. According to marketing materials spotted by a Redditor in Nottingham, UK, the British telecommunications company Three will be offering its customers a new Chromebook with the activation of a Pixel 4.

Thanks to an eagle-eyed Redditor who snapped this photo through an unguarded storefront window, we can see a white variant of the Pixel 4 that matches up perfectly with previous photos strewn across the internet. On the lefthand side, the promotion reads, "Pre-order the new Google Pixel 4 and get an HP Chromebook 14 on us." This is a pretty good deal considering we thought this Chromebook's build quality was "confidence-inspiring" when it launched at the start of this year. 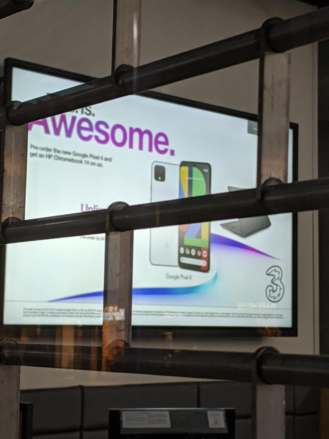 Despite going on its fourth iteration, Pixel phone sales still aren't quite up to snuff compared to other major device OEMs. For any customers in the UK who aren't sure if Pixel 4 is the right phone for them, this incentive from Three is sure to catch some buyers' attentions.