Nvidia has just announced that it's planning to bring its game streaming service GeForce Now to more mobile Android devices sometime in the future with a beta app. Right now the entire service is in beta, and it's only available to Windows, Mac, and Nvidia Shield users. This service beta should end in a couple of months whenever it's officially launched, though it's currently unclear if the upcoming beta for the mobile-focused app will be launched at the same time. Of course, since we are nearing the official release of the service, Nvidia has just opened its first RTX servers to German and Californian residents, which should bring with it some exemplary graphics.
Thanks to a recent announcement for Gamescon, Nvidia has revealed that it will bring its GeForce Now game streaming service to more mobile Android devices sometime in the future with a beta app release. No date has been provided for when we should expect the mobile app to land, though it does appear that Nvidia should finally launch the Shield-focused service out of beta in the coming months. In light of this news, it makes sense that Nvidia would launch its first RTX servers in Germany and Northern California starting today as the company ramps up for the official release. This RTX access should expand to the rest of Europe as well as North America in the coming months.

I suppose with Google's Stadia on the horizon, it makes sense that Nvidia would be looking to expand its own game streaming service, and since this service has been in beta for some time now as the company retooled the platform, it's nice to know that we are finally nearing the official release. I'm also excited to see what Nvidia's new mobile-focused app brings, as I would love to finally be able to stream my GeForce games on my phones, non-Shield tablets, and Chromebooks. Nvidia has mentioned that physical controllers will be necessary for many of the compatible titles, much like the Shield TV offering, so nothing much has changed on this front. For all intents and purposes, it looks like Nvidia is going to take its game streaming service seriously by offering a quality competitor to Stadia. While it's still early days, I have to say I'm excited to see what the future holds.

Cloud gaming has been picking up steam this year, but we’ve been enjoying the view from the cloud for quite some time. To the tune of 30 million hours of gameplay, from over 1,000 games streamed from GeForce NOW servers.

Since we launched the GeForce NOW public beta, we’ve been heads-down and laser-focused on developing the best cloud gaming service. And while we’re looking forward to launching the service out of beta in the coming months for the millions of gamers eager to play from the cloud, we’re closing in on a couple major milestones.

Expect to hear more information shortly from our GeForce NOW Alliance partners on their plans to roll out GeForce NOW in new regions. Our initial partners, Softbank and LG U+, are bringing GeForce NOW to Japan and Korea.

RTX Performance in the Cloud
At our GPU Technology Conference earlier this year, we announced RTX Servers. Starting today, we’re beginning their rollout. Gamers in Northern California and Germany will be the first to take advantage of GeForce RTX performance. Over time, we’ll expand to our data centers throughout North America and Europe, enabling next-generation gaming in the cloud.

2 Billion New Screens to Game On
Already in beta to the delight of 1 billion underpowered PCs that aren’t game ready, GeForce NOW will soon extend to one of the most popular screens in the world, Android phones — including flagship devices from LG and Samsung.

Just like on PC, Mac and SHIELD TV, when the Android mobile app releases it’ll be in beta. We’ll continue improving and optimizing the experience. To take full advantage of the mobile experience, we’re recommending gaming with a Bluetooth gamepad, such as SHIELD controller, Razer Raiju Mobile or Steelseries Stratus Duo, as some games will be unplayable on an Android phone without a gamepad.

An Open Platform for Gamers, Publishers and Developers
The service connects to popular digital game stores, allowing gamers to bring their game libraries with them. That includes new releases and hit titles like Control (coming soon), Fallout 76, Fortnite, Shadow of the Tomb Raider, Wolfenstein: Youngblood and World of Tanks. So you can play the games you already own across all your devices — PC, Mac and SHIELD — with more platforms coming later this year.

We already support over 500 games, with compatibility for thousands more. And we’re exploring how our users can play more of their favorite games, even before they’re formally part of our library.

Since games are purchased from popular digital stores, gamers still can download and play their games locally. So, a second purchase isn’t needed to play them in the cloud with GeForce NOW. This also means that developers don’t need to spend cycles porting their games to a new platform, nor is there a new business model being introduced to publishers.

Play the Future Today, as We Prepare for Tomorrow
Available today on Mac, PC and SHIELD TV, GeForce NOW is transforming those devices into full-blown gaming rigs. It’s a gaming PC in the cloud for hardware that isn’t game ready.

GeForce NOW is the first gaming rig that you never have to worry about upgrading, patching or updating. We handle all this for you, so you’re always moments away from playing your favorite games.

And, like any great platform, GeForce NOW continues to improve. Look for big announcements coming later this year.

The sun is starting to set on the free beta period, meaning gamers who want to play the future today should request access before it’s gone!

The new GeForce NOW app has arrived on the Play Store, but only for Korean users 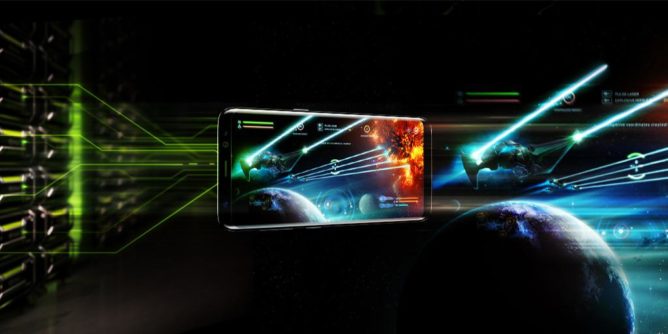 It would appear that things are still moving along with the beta for GeForce Now. The new Nvidia GeForce NOW app has arrived on the Play Store, though it looks like it's only available in Korea at the moment. In August, we learned that Nvidia would expand the scope of the GeForce Now game streaming service by providing a new app that supports Android devices outside of the Shield line, but since the service is still in beta, it looks like more testing needs to be done. I would imagine this is why Nvidia has only released the new GeForce Now app in Korea for the time being. It's still clear that Western Android users should expect the official release of this new app sometime soon, but until then, only Korean users can take the service for a spin on their phones.

If you'd like to sideload the Nvidia GeForce NOW app to try your luck, you can find it on APK Mirror.

9 temporarily free and 16 on-sale apps and games for the weekend, including Monument Valley 2