All screenshots aren't created equal, specifically if you snap images directly within the Google application. In February 2018, we discovered that an in-app photo editor had been included in a beta build of the Google search app. After a year and a half of silence regarding its development, this built-in editing feature is showing new signs of life with a revamped UI, rolling out now to the stable version of the Google app.

Now when taking a screenshot from within the main Google app, the user is presented with a bottom bar that includes an editing pen, share sheet, Lens icon, and a quick share suggestion.

Tapping the editing pen reveals a simple cropping tool to cut off excess screen real estate, a markup pen with a wider range of annotation options, and a Lens icon to analyze your screen with Google's machine-vision magic. 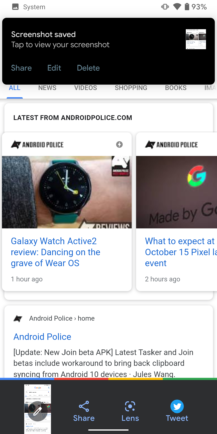 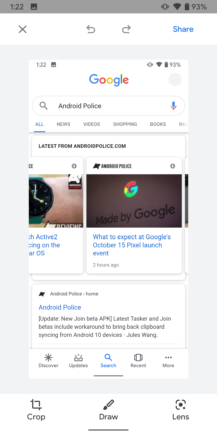 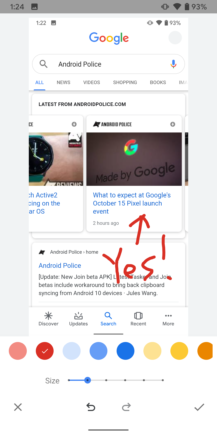 These changes are a welcome addition for anyone who takes a lot of screenshots within the Google app. However, there are still a handful of omissions worth griping about. For starters, it's currently not possible to zoom into an image while editing, so if you want to focus in on one area of the image for more finely tuned markups, that can't be done. During testing, these in-app editing features were only active from within the Google search and Discover sections; the updates section with Google Assistant was not included.

This feature is rolling out now as a server-side update to version 10.70.6 of the Google app, available on the Play Store and APK Mirror. To check it out, you first need to enable it under More > Settings > General > Edit & share screenshots.

11 temporarily free and 41 on-sale apps and games, including Monument Valley, Dandara, and ...