Late last month, Amazon announced a bevy of new and updated products falling under the "Echo" brand. Included in this list was the third-generation Echo Dot, now with a built-in clock. The Dot is already one of Amazon's best-selling Echo devices, and with this pre-order deal, you can snag one for $49.99 ($10 off).

The new Echo Dot ushers in a handful of improvements over the second-generation version. The always-on LED display tucked beneath its fabric face shows information like the current time, outdoor temperature, active timers, and upcoming alarms, while a new speaker system provides richer, louder audio playback. Other core Echo features are also on board, including voice-controlled commands, Alexa skill support, music streaming, and hands-free calling capabilities. 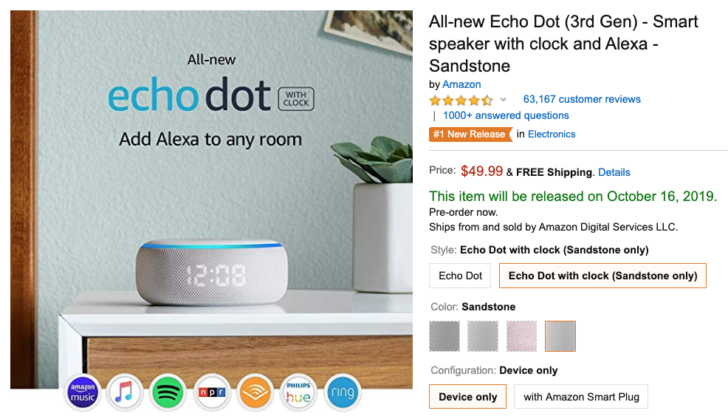 The third-generation Amazon Echo Dot is available for preorder now for $49.99 with an estimated release date of October 16, 2019. If you'd like an even more affordable deal, the third gen Dot without clock is also currently on sale for $39.99 ($10 off).