The Link to Windows feature, which creates a seamless connection between a phone and PC, is now compatible with five more Galaxy devices: S10, S10+, S10e, S10 5G, and Fold. Previously, it was exclusive to the Galaxy Note 10.

The Link to Windows Quick Settings toggle will now be present on the Galaxy S10 family and Fold.

For the Link to Windows feature to work, you'll need two apps: Microsoft's Your Phone desktop app and the Your Phone Companion - Link to Windows app from the Play Store. Once the setup is complete, you can view and copy your phone's recent photos, read and write text messages, and view and clear notifications all from your PC.

With the Phone screen mirroring feature, you are now able to interact with your Android apps using a keyboard and mouse or the touch screen of your PC. As expected, multi-touch gestures will all work, such as pinch to zoom, rotate, and swipe. If this sounds familiar to Samsung Flow, it is. Samsung Flow, however, has been very buggy for me on my Galaxy S10+ and HP Spectre x360 Windows laptop. Animations are laggy, gestures and swipes don't work all the time, and I just can't bring up the keyboard in my Samsung Messages app. With Microsoft and Samsung collaborating closely these days, I'm hoping for Samsung Flow and Your Phone to become integrated into one app that is both performant and reliable.

The final new addition is cosmetic and has to do with how the phone icon looks inside the Your Phone desktop app. Instead of showing just a generic phone image with the phone model name below it, the new icon will display your phone's home screen wallpaper and show a battery level indicator next to it. 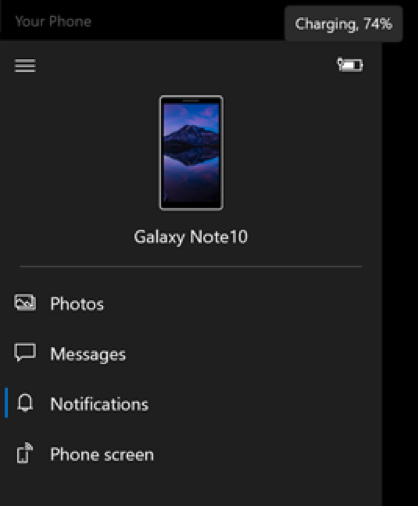 Microsoft says these features are gradually rolling out to Windows 10 Insiders across select global markets, and it may take a few days before the changes become apparent. Regular Windows 10 users can expect these features to come out sometime in 2020. Can't wait that long? Then go ahead and sign up to become a Windows Insider. The obvious downside is that Insider builds can be quite buggy, and you may have to reformat your system to get back to a stable version. But that comes with the territory.