The OnePlus 7T went official last Thursday amid much fanfare. Our very own Ryne Hager's first impressions of the mid-tier flagship were positive, and he particularly liked the super macro mode and the software experience that’s now based on Android 10. OnePlus isn't resting on its laurels, though, and is already rolling out the OxygenOS 10.0.3 update to the handset with a handful of system and camera improvements. 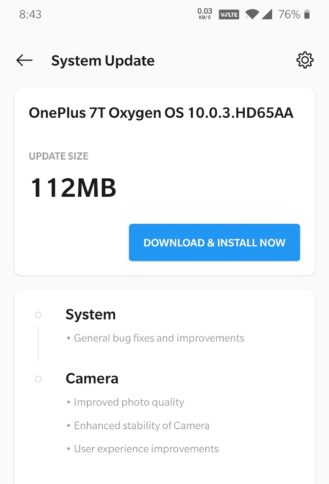 The incremental update focuses on the 7T’s cameras by improving their image quality and stability. OnePlus also mentioned an enhanced user experience, probably of the camera app, without going into details. Finally, there are some system-level refinements and squashed bugs. You can find the entire changelog below:

This OxygenOS 10.0.3 OTA update weighs 112MB and will be released to all OnePlus 7T units over the next few days. Initially, this version will roll out to a small group of people, possibly to identify any major flaws before it hits a wider userbase. You can supposedly grab this build right away using a VPN connected to a Canadian server, but your mileage may vary.