We are 13 days away from the Made by Google event on October 15th and leaks about the Pixel 4 and Pixel 4 XL continue gushing out. We've already seen the official press renders and covered new functions which are possibly exclusive only to the Pixel 4 devices. One of the latest leaks to come out spills the beans on what's inside the Pixel 4 devices and what will be included in the box.

The report by 9to5 Google confirms mostly what we already suspected — both Pixel devices will be powered by the Snapdragon 855 SOC, come equipped with 6GB of RAM, have 64GB or 128GB of internal storage, feature OLED displays, carry two cameras on the back, and include the Titan M Security Module. Here is the leaked photo of the official spec sheet:

The only significant piece of information that wasn't spotlighted by the previous leaks is the mention of the "Pixel Neural Core" — it's likely a new camera-related marketing term that supersedes the previous "Pixel Visual Core" terminology. We'll know for certain come the 15th.

Also leaked was a list of items that'll be included in the box for the US Pixel 4: a 1-meter USB-C to USB-C cable, an 18W USB-C charger, a Quick Switch Adapter, a SIM tool, and a Quick Start Guide. 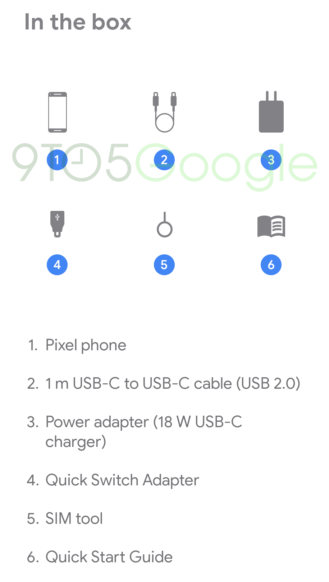 With such an influx of leaks coming out on an almost daily basis, we wonder if there will be any surprises left before the phones are officially unveiled on the 15th.

Samsung will no longer manufacture phones in China