The Samsung Galaxy Fold's original May release had to be pushed back a few months due to issues with debris getting into the hinge and breaking the inner screen. The revised version is finally available for purchase, but it's still a delicate device prone to breakage, something that's evident in JerryRigEverything's stress test and the multitude of warnings included with the phone. But even if you're extra careful around it, questions remain about how well the Fold... folds. Insurance firm SquareTrade took it upon itself to test how the device holds up against this regular everyday use case.

To judge the durability of the hinge, the company built an automatic folding device that simulates the rapid opening and closing the Fold will have to endure during its life. In contrast to Samsung's similar test array, the machine is much faster and we can assume SquareTrade's testing grounds aren't as free of dust as Samsung's were, so its environment is much closer to real-world use.

Samsung says users will get through an average of about 120,000 folds over the course of three years, so SquareTrade decided to test against this claim. After only about 20,000 folds, approximately half a year of ownership by Samsung's reckoning, a small blob of pixels started to malfunction, leaving a visible mark on the inner display similar to TechCrunch's broken device. At 40,000 folds, the touchscreen appeared to stop working, but a rest and a recharge overnight fixed this. Nearing the full count of 120,000, the firm also noticed some deterioration in the hinge action. 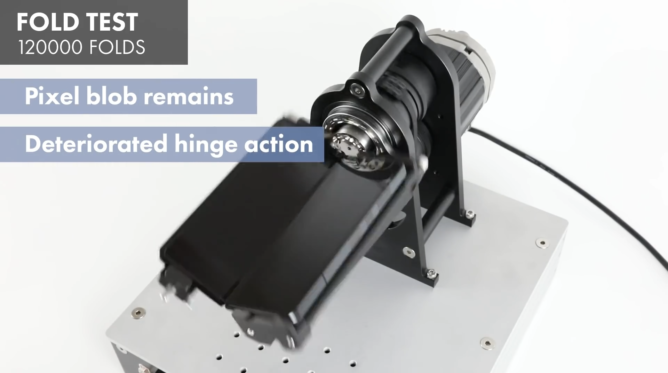 The test highlights how fragile the Galaxy Fold is, even after the much-needed improvements in dust-resistance carried out by Samsung in recent months. Of course, one single folding test isn't enough to speak of an inherent design flaw, but it's still significant how quickly issues can arise. While the phone isn't left completely broken by the fold test, a single drop — even with the included protective case on — rendered it completely unusable. That's a quick way to blow $2,000.

Look, we get it: A lot of people have a morbid fascination in watching expensive stuff destroyed. And the loftier and more arrogant the manufacturer's efforts, the more satisfying that ultimate failure is. So a phone with a screen that bends rather than breaks? That's just begging for some destructive testing. And lucky for you, there's a live front-row seat.

CNET has borrowed one of SquareTrade's machines and is streaming a Galaxy Fold stress test. Based on what we now know, that phone's likely to fail sooner or later — maybe sooner. So if you can put up with listening to a few hours of clack-a, clack-a, clack-a, you have the chance to be right there for the potentially catastrophic failure.

Come on, like you were going to watch anything better on TV tonight?