Motorola looks intent on layering on more phones in its One mid-range series of smartphones. Hot on the release of the One Zoom and One Action, Saudi tech retailer Extra has prematurely revealed the existence of the Motorola One Macro.

The product page for the Motorola One Macro has been wiped off the company's servers, but it was still available through Google's web cache service as of time of writing. The specifications list, as the page was published, was empty, but the so-called "Highlights" panel had plenty of details: the device has an octa-core processor, 4GB of RAM, 64GB of storage, a 6.2-inch display, three rear cameras (13MP + 2MP + 2MP), an 8MP selfie shooter, a 4,000mAh battery, and Android 9 Pie.

Supposedly, we're looking out for capabilities that will let users take super-sharp photos from right up close to a subject — maybe something less than about 18" as that's the minimum focus distance for most smartphones. Suffice to say, that's not a common feature you'd see in a mid-range device.

The device is being advertised at 899 riyals — that's about $240. There's no further intelligence on launch plans and regions.

Leaks blogger Evan Blass has posted to his Twitter account renders of the Motorola One Macro in a new purple color to go along with the blue ones we see above. 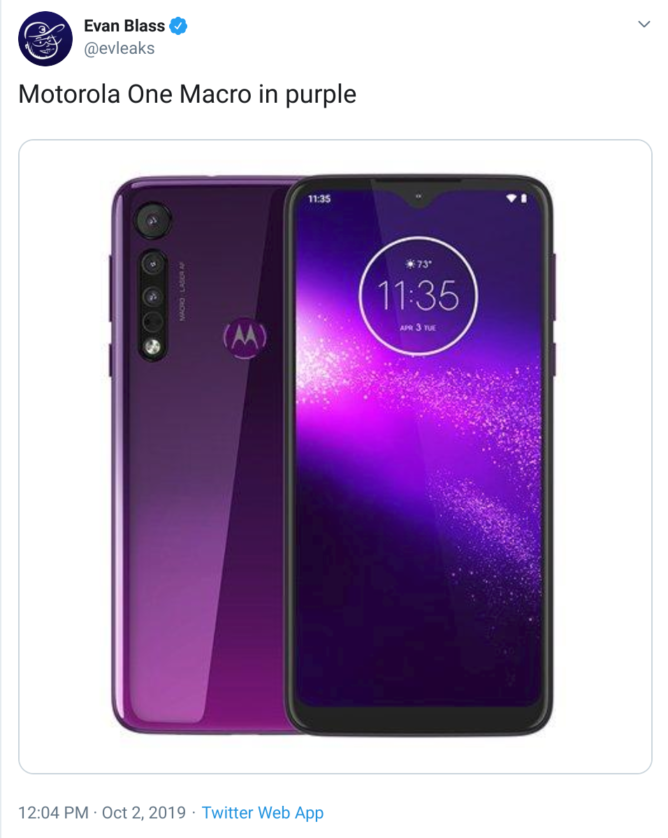