If spending about $1,000 for a flagship is just too much but you still desire an attractive-looking phone with great battery capacity and stamina, a good set of cameras, and a quality screen at an affordable price, the international version of the Samsung Galaxy A50 mid-range phone with 128GB of internal storage is listed on eBay for $285.90.

The international model of the Samsung Galaxy A50 was introduced back in February of 2019 and its stand-out features are support for dual SIM cards, a 6.4-inch 1080P AMOLED screen with a high screen-to-body ratio, three rear cameras, and a relatively big 4,000 mAh battery.

It's worth noting that the eBay seller in question (qd_us) has a 99.2% positive feedback rating and ten years of selling history, plus a free 30-day return policy.

Before clicking on that Buy It Now button, however, make sure first that your current carrier is compatible with the phone. Being an international model, it doesn't support all of the US LTE bands and Verizon and Sprint are definitely not supported (because of CDMA). AT&T, T-Mobile, and other GSM-based carriers are compatible—with some LTE bands missing. The phone is available in the white, blue, and black color variants.

If you would rather use the Galaxy A50 on Verizon or Sprint, then one option would be to purchase the US SIM-unlocked version from Samsung directly. By going that route, however, the price is higher ($350) and the internal storage is only 64GB. If you own an eligible phone to trade in to Samsung, your final price could potentially be lower than the eBay deal. 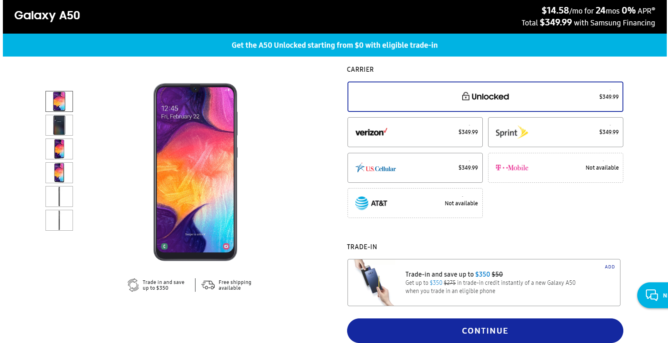 Best Buy is also selling the same US unlocked model for $350, with the price as low as $200 if the phone is activated at the retailer. 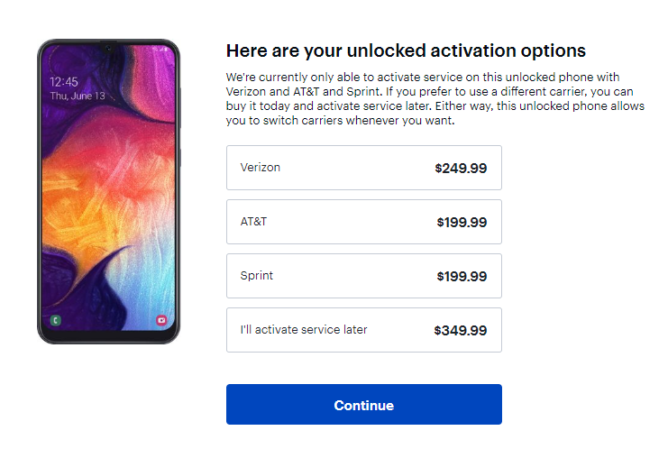 The quantity of the international Galaxy A50 on eBay looks to be limited so hop on over there to secure yourself a great mid-range phone from Samsung.


The A50 has dropped further on eBay — it's currently $274.90. The price seems to be fluctuating, though, so if you're interested, get in while the getting is good. 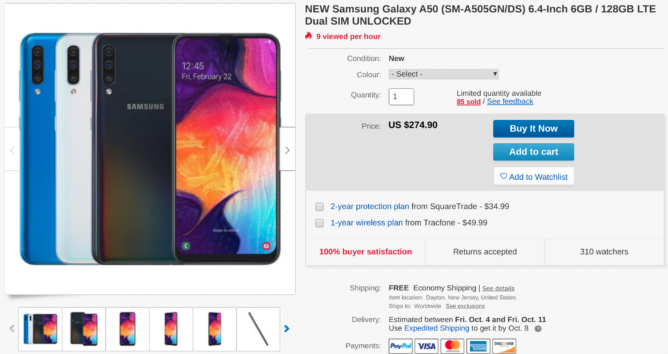