Rylo was founded by former Instagram and Apple engineers in 2015 and the Rylo action camera is its first product. It's capable of capturing both 360° and 180° videos at varying resolutions in addition to taking photos at up to 6K panoramas via its dual wide-angle lenses with 208° FOV. Its video stabilization technology is considered to be superior to most other action cameras of its kind — such as GoPros — and is highly-rated. For more detailed specifications and features, check out Rylo's homepage.

At Best Buy, the Rylo has a relatively high rating of 4.2 from 77 reviews with most users impressed by its video stabilization and easy-to-use editing tools. I, myself, have been using the Rylo action camera since May of last year and I've been thoroughly impressed with its video and audio quality, superb video stabilization, and its easy-to-use Rylo app from the Play Store. 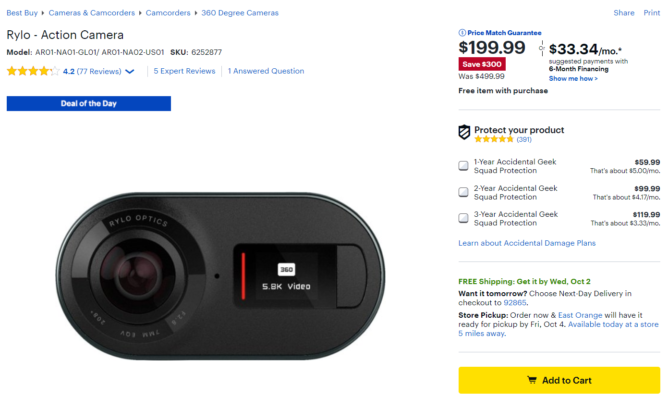 If you were interested in creating nifty 360° video footage and pictures but it was cost inhibitive for you in the past, now would be a perfect time to grab one before the sale ends.

Alas, the deal is now over and the price has gone up to $400. It's still $100 off but not as good as before. Sorry if you missed the previous deal.