Flying a drone around isn't just a joy, it's also a bit of a terror. Thousands of dollars of gear chopping through the air, between trees, or up against cliff faces and lakes as you record video or take photos is enough to give any pilot agita. Those looking for a bit of a safety net when capturing content from the sky will be happy to hear that the new Skydio 2 has the smarts and the hardware to fly itself. 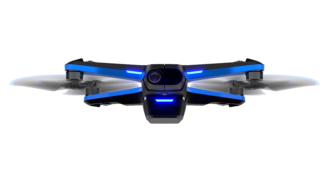 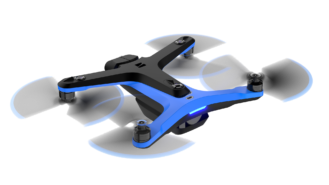 The Skydio 2, at its most basic, is a drone with a built-in camera that can record video at 4K and 60 FPS, with an advertised 13 stops of dynamic range. It can also capture 12MP photos, and 120fps slow-motion 1080p video, all with up to 23 minutes of flight time, a max speed of 36mph, and up to 3.5km of wireless range.

What makes the Skydio 2 unique is an "Onboard AI," which powers the "Skydio Autonomy Engine." That might sound like a bunch of 2017-era marketing, but it boils down to a pretty cool feature: the drone can fly itself, follow you around, and won't run into stuff.

The system is powered by six 4K navigational cameras which give the software flying the drone a 360-degree view of its environment for omnidirectional obstacle avoidance with object tracking and identification for up to 10 simultaneous objects of interest. So if you're recording video of yourself in action, you can do it solo and just focus on your performance. The onboard AI even plans out its movements to deliver the most "cinematic" capture it can. Based on the clips in the video above, it can do a pretty decent job. 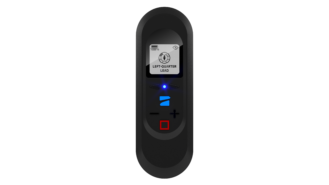 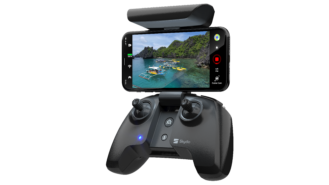 If you prefer the hands-on approach, you can also fly the drone with your phone or a separate controller ($149) offering up to 3.5 km of range. Even with manual control, you still get AI-enhanced obstacle avoidance which claims to be tight and accurate enough to fit through small gaps in foliage or skim surfaces safely. That way you can practice your 3D cinematography without worrying about barreling straight into a tree as you line things up.

The Skydio Beacon (Also $149) also enhances range out to 1.5 km and allows the drone to track you through objects. The Beacon is also a sort of controller in itself, with Wii controller-like "wand" functionality that lets you point it to locations you want the drone to fly to, and the onboard AI takes care of the rest. 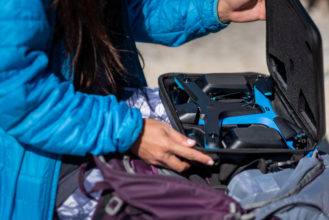 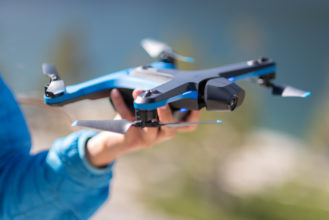 In fact, the company behind the product is so confident in its AI's ability to keep your drone from busting itself up, that it is willing to repair or replace it should it crash, so long as you follow its "safe operating guidelines" during use.

The Skydio 2 will start shipping in limited quantities this November, and you can place a reservation with a $100 deposit at Skydio's site starting today at 10AM (PT). Folks that purchased Skydio's R1 drone will also be able to get the Skydio 2 at a discount, and they'll be contacted directly with details.