This article is part of our Guides for Amazon Fire Tablets series.

Amazon's Fire tablets are usually a great value, but they typically come with less internal storage than most smartphones. The cheapest models come with just 16GB of space, with less than that available for downloading apps and storing data.

In this guide, we'll go over some ways you can clear up the junk on your Fire tablet.

This is probably very obvious to most of you, but the first step you should take is deleting any apps you previously downloaded that you don't use. Amazon unfortunately doesn't let you delete the dozens of pre-installed applications that come with your tablet (who actually uses the Maps app?), but you can still get rid of apps and games you haven't opened in forever.

Get an SD card

All Fire tablets have a microSD card slot that you can use for extra storage. However, depending on how old your tablet is, adding an SD card might not help matters much. 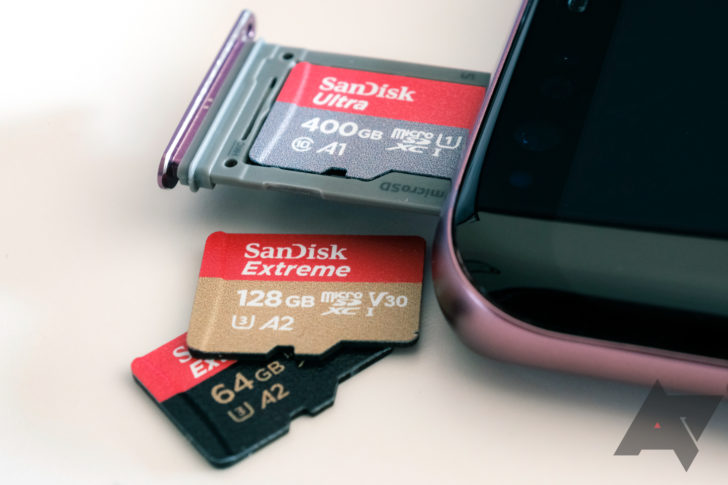 If you have a tablet running Fire OS 6.0 or newer, SD cards can actually function as an extension to your tablet's internal storage, using an Android feature called Adoptable Storage. This means apps and other data can be moved to the SD card as needed. When you insert an SD card, an option will appear to use the card as internal storage.

You can check what version of Fire OS your tablet has by opening the Settings app and going to Device Options > System Updates..

If you have an older tablet, most apps can't be moved to the SD card — it can mostly only be used as extra space for downloads and offline content. For example, the Netflix and Amazon Prime Video apps can be configured to download content to the SD card instead of the internal storage. This method won't do much to cure your storage woes, unless your tablet's space is being taken up by downloaded files that can be easily moved. 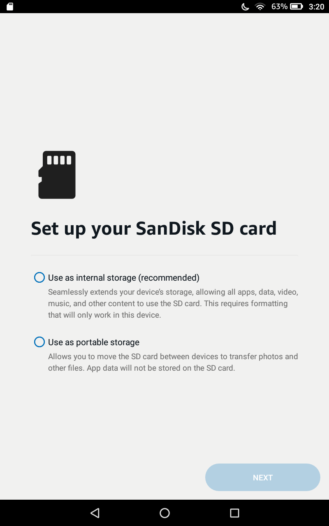 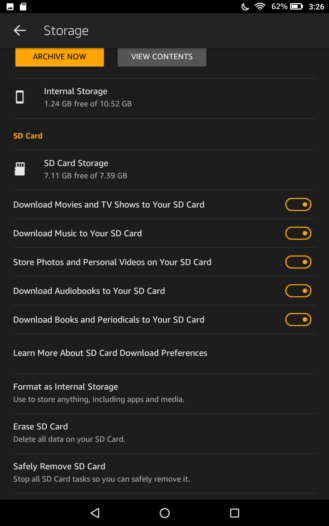 Regardless of what option you go with, you should buy a microSD card with the A2 rating, so you get the best possible performance (the 'A' means it's better for running apps from). We recommend SanDisk's Extreme Pro cards. As we've covered in detail, even the fastest microSD cards are slower than the internal storage used by modern phones and tablets, but your options with a Fire tablet are limited.

Clean up the junk

Android apps can be pretty messy. Some apps and games leave cached files and data all over your internal storage, even after the apps themselves are deleted. Files by Google is a great tool for cleaning up downloads, junk data, duplicate files, and more unwanted cruft from your Fire tablet. 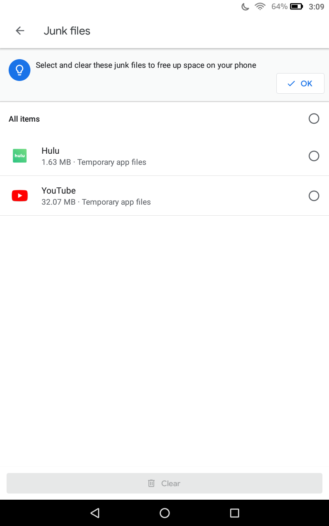 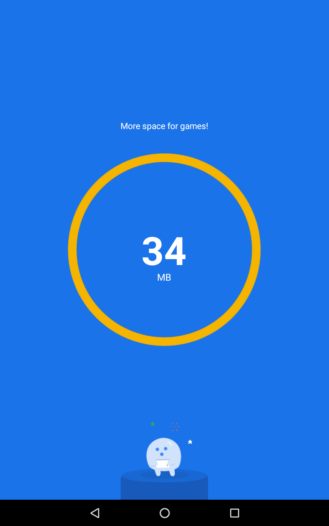 If you've already installed the Google Play Store on your Fire tablet (perhaps with our guide?), you can just download Files by Google from the Play Store. If you don't have the Play Store, you can still grab the Files app from APKMirror.

Archive stuff you don't use

Amazon has a '1-Tap Archive' feature that automatically removes content downloaded to your tablet from the cloud. As opposed to simply deleting the content, anything archived can be re-downloaded at any time. 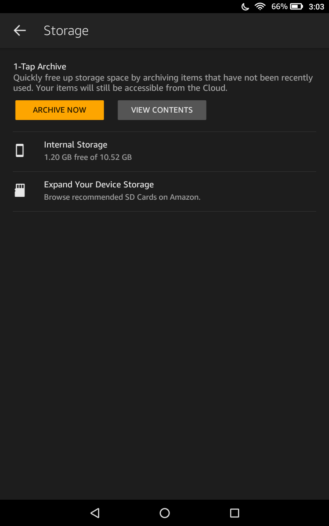 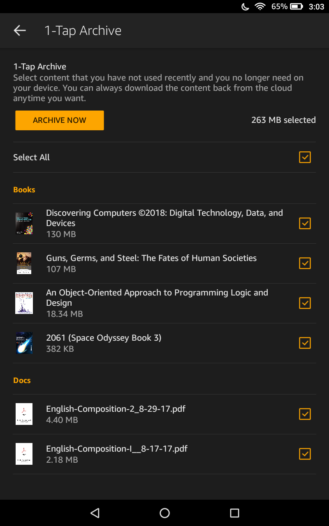 To access this feature, open the Settings app, and select Storage from the list. You can either press the big 'Archive Now' button to let the tablet do its thing, or you can see what exactly will be archived by tapping the 'View Contents' button.

The last way you can clear up storage on your Fire tablet, short of a factory reset, is to go through all installed applications to see which are hogging up space. Open the Settings app, go to 'Apps & Notifications', and tap 'Manage All Applications.' Then press the menu button at the top-right corner and tap the option to show system apps.

There isn't an option to sort apps by how much storage they are taking up, so you have to slowly scroll down the list to see which ones are taking up lots of space (the data size is under each app). When you find a culprit, tap it and select Uninstall. If it's a system app that can't be removed, select 'Storage' and tap 'Clear data.' 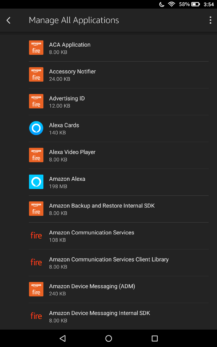 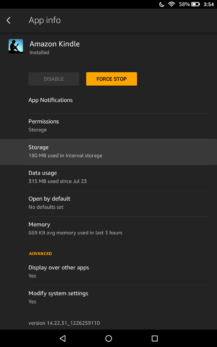 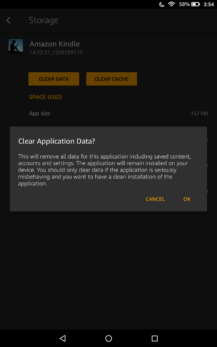 It's normal for apps to require up to 100 or 200MB of storage, so you're looking for apps using much more than that. On my tablet, DeviceSoftwareOTA (the service that downloads OS updates) was using a whopping 1.5GB of storage. Other reports say that the Amazon Appstore likes to eat up storage as well.