Action camera maker GoPro is putting up two new products for the 2019 holiday season — another iteration in its HERO series and its first 360° camera since the rather forgettable Fusion. The Hero8 Black packs in big technical improvements up over the Hero7 Black while the new MAX brings two cameras and spherical views to rough-and-tumble scenes.

The Hero8 Black has your standard GoPro hardware with a 12MP sensor, three microphones, a touchscreen, Wi-Fi, Bluetooth, and GPS — all encased to go underwater at down to 10m. Speaking of casing, it's the first Hero to include an on-body folding-finger mount and allows for easier access to the battery and SD card compartment.

It also keeps the GP1 chip introduced on last year's big Hero camera which allows for wake and controls through voice commands. However, that processing power has been bolstered, recording 2.7K or 4K footage at 60fps with up to 100Mbps. The maximum live streaming resolution option also gets a bump from 720p to 1080p. The Hero8 also brings pitch correction improvements to HyperSmooth (now version 2.0!) video stabilization and automatic speed management to TimeWarp (also v2.0!) slow motion. 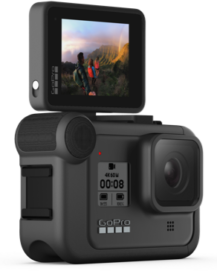 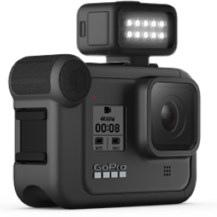 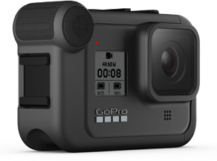 With the new camera come three new mods: an $80 Media Mod with an embedded shotgun mic, two cold shoe mounts and ports for USB-C, HDMI, and 3.5mm accessories; an $80 Display Mod to stack on top of the Media mod that chucks a larger, brighter 1.9" screen that can face camera front for vloggers or camera back for more complex shoots, and; the Light Mod, a $50 waterproof lightbox that comes with a diffuser and can be mounted on-device or elsewhere.

All of this would be on top of the $400 Hero8 Black. You can pre-order today from GoPro and have it shipped starting October 15 or wait until October 20 to grab one from a retailer.

The GoPro MAX brings together two cameras to generate 5.5MP flat images, 6.2MP panoramas at up to 270° or 16.6MP full-sphere stills. Conventional video can be captured at up to 1440p and 60fps while spherical video is rated at 5.6K and 30fps.

The device is about 30% larger than a typical Hero camera. It comes with Wi-Fi, Bluetooth, GPS, six microphones, a touchscreen with horizon leveling on the viewfinder standard, and waterproofing for down to 5m, though there's no HDMI or 3.5mm line out possible. It also has the GP1 chip for 1080p live streams with special HyperSmooth and TimeWarp modes. As a bonus, it also has an in-body folding-fingers mount.

GoPro will be keeping the Hero7 Black and Hero7 Silver in its active lineup, continuing to sell them for $329 and $199, respectively.

One major note about apps: functions from the Quik video editor app are being merged into the main GoPro app.