Android tablets, like their phone counterparts, receive periodic Android OS updates — albeit much more slowly. The Verizon Samsung Galaxy Tab S3 tablet — a flagship LTE tablet from 2017 — has now been updated to Android 9 Pie. Sure, Android 10 would be preferable, but that will probably never happen considering the Tab S3 launched with Android 7 Nougat.

We gave the WiFi-only Samsung Galaxy Tab S3 a mostly positive review when it launched. While the price was high, it had solid build quality, responsive performance, improved S Pen accuracy, and a beautiful 9.7-inch AMOLED screen with support for HDR video. It still has those things, although it's a little behind the times now with 4GB of RAM, 32GB of internal storage, and the aging Snapdragon 820 SOC. 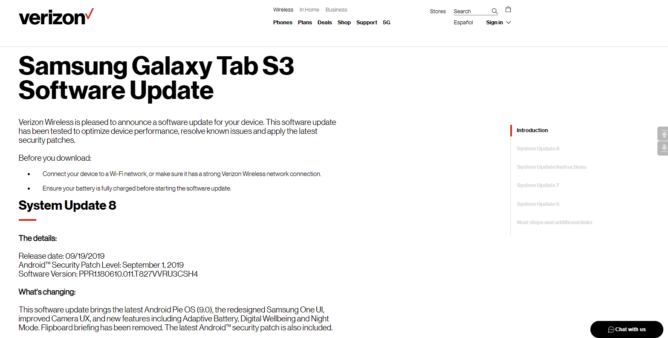 The Verizon update carries version number PPR1.180610.011.T827VVRU3CSH4 and comes with the September 1, 2019 Android Security Patch. Also included is Samsung's redesigned One UI with new features such as Adaptive Battery, Adaptive Brightness, App Actions, and Digital Wellbeing. The update arrives one month behind Samsung's original schedule but not too far behind the WiFi-only Galaxy Tab S3 models. Regardless, Verizon users have the update now, too. If you don't have Pie on your Verizon Tab S3 yet, find some WiFi and check for updates in the settings.

[Update: Bluetooth certification] NVIDIA might have a second new Shield TV in the works, ...