No product is more emblematic of the fusion of Google and Nest into a single brand than the new Google Nest Hub Max. This is the bigger brother to the Google Home Hub, later renamed the Google Nest Hub. The two devices share many of the same features like Ambient EQ and smart home controls, but the Hub Max steps up with a camera, better audio, and a much larger screen for $229. If you're looking to pick up a big smart display with Assistant, the Nest Hub Max is absolutely your best bet. However, don't count on the "Nest" part of the Nest Hub Max to impress—it's not a very good security camera.

If shrink rays existed and you used one on the Hub Max, it would look virtually identical to the Nest Hub. The 10-inch LCD has a generous but not distracting white border around the perimeter. The display is higher resolution than the Nest Hub at 1280 x 800 (vs. 1024 x 600), which is about 150 pixels per inch. That's lower than the 170 PPI on the smaller Nest Hub. It's sharp enough for the way most people will use it, but you can seem some roughness if you lean in close. The Hub Max display is very bright, so it looks good even in a sunny room. Thankfully, the Hub Max supports Ambient EQ like the last Google display. Using the light sensor, it adjusts the display temperature to match the room, so you won't end up with a distractingly bluish 10-inch display in the corner all evening. 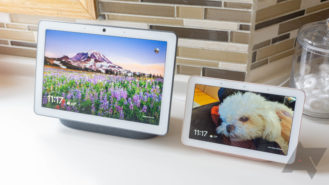 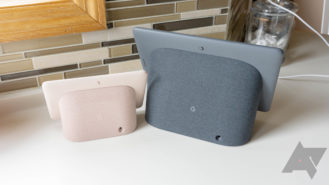 The base houses the speakers, and like other Home/Nest products, it has a soft fabric covering. The fabric peeks out under the display bezel, but it's otherwise invisible unless you can see the display from behind. Other than the size, the most obvious change to the Hub Max's design is the inclusion of a camera in the middle of the top bezel. There are also microphones, a light sensor, and a status LED up there. On the back of the display, you have a volume rocker and a switch to disable the camera and microphone.

Setting up the Hub Max starts out the same as any Google Home/Hub device. You plug it in with the included DC cable, wait for it to boot, and open the Home app to configure. Things start to diverge when Google asks you about the Hub Max's camera features, which are entirely optional. This means more steps to get up and running, but I understand Google's position. With all the privacy implications of adding cameras to smart home devices, it's being extra careful. 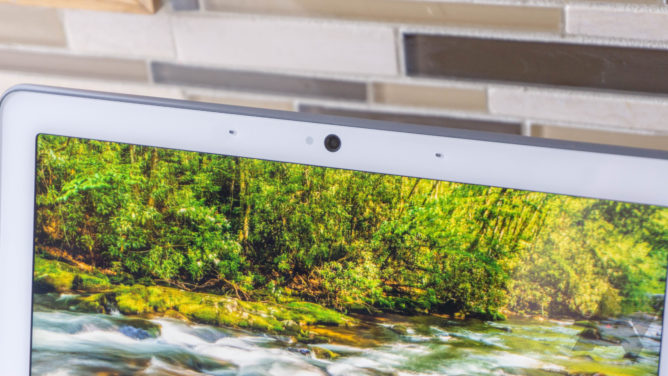 After you do the basic setup, the Hub is ready for use. If you want to configure the Hub Max for use as a Nest security camera, you'll have to jump through an additional hoop. After opting in and enabling Nest functionality in the settings, you'll have to hop over to the Nest app and add the Hub. It pulls up a QR code on the screen, which you scan with the app. Likewise, you need to go through an additional setup process for Face Match, which is in the Home app settings. The process is quick... if it works. Artem reports it took him four attempts, but mine worked the first time.

Unsurprisingly, there are no accessories in the box with the Hub Max. You get the display itself and a power cable. There's also a small booklet with setup info and a warranty card. Google also included a third little booklet specifically about privacy, reminding buyers how to turn off the camera and microphones.

Using the Hub Max has been pleasant but not revolutionary. Most of the experience is identical to the smaller Nest Hub, just bigger. You can talk to the display from across the room to play music, control smart home devices, and more. It also has the Home View interface that makes all your smart home devices easily accessible. Face Match is one of the new features, and it works well after you get it set up. Even peeking into the periphery of the frame is enough for the Hub to bring up your content like upcoming appointments, video recommendations, and more. It also gives you a cool daily report when you walk by each morning with the forecast, commute projections, and top news. The camera additionally powers Google's new gesture control, which lets you pause and play media by raising a hand. This works better than I expected, but you do have to look at the Hub while giving it a virtual high five. 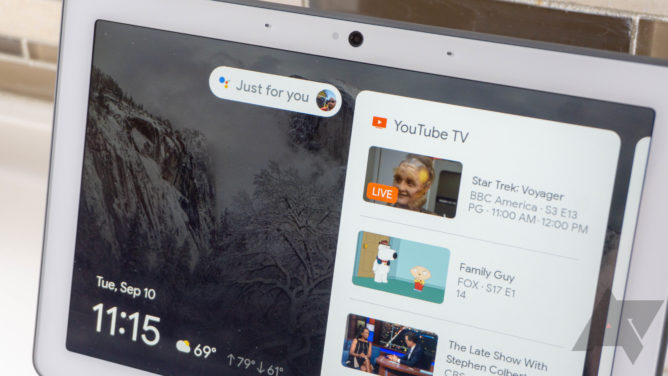 With a name like Hub Max, you might have been hoping for an audio analog to the Home Max speaker. Sadly, that is not the case. The Home Max remains the best Assistant speaker I've used, but the Hub Max is no slouch. It's better than the Nest Hub, which was just Home Mini with slightly louder output. Listening to music on the Nest Hub is a noticeably lacking experience even for non-audiophiles, but I think most people will be perfectly happy with the Nest Hub Max. 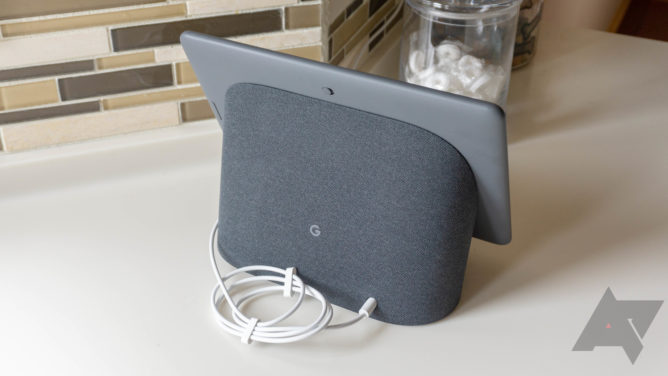 The Hub Max can fill a room with sound without sounding distorted or tinny. It's sufficiently loud to drown out the usual kitchen noises (where I have my Hub) like a dishwasher or someone chopping produce. It has significantly more bass than the Nest Hub, too. I have the Hub Max against a wall, as I assume most people will. The sound reflecting off the wall can give it a somewhat echo-y quality because the speakers still face backward. If you're looking for a real world comparison, I'd say the Nest Hub Max sounds like the OG Home speaker with more thump.

After setting up the Nest camera features, one thing became immediately apparent: video chat cameras don't automatically make good surveillance cameras. The Hub Max's camera is extremely wide-angle, but it's tilted upward. That's good for video chat as it'll be able to get you in the shot almost anyplace in the room, and the Hub zooms and follows you during a Duo call—it works really well. Odd angle aside, the Nest camera features work fine as long as it's not dark. The camera is essentially useless at night because there's no IR illuminator for night vision (see below). 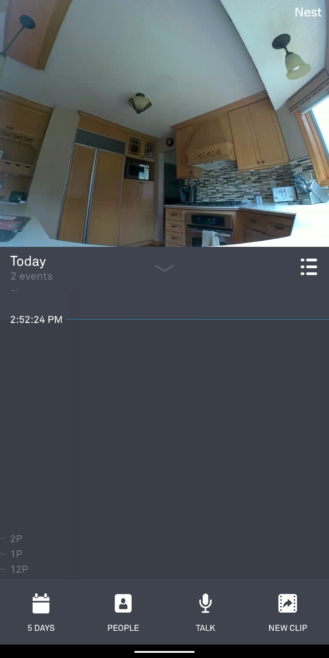 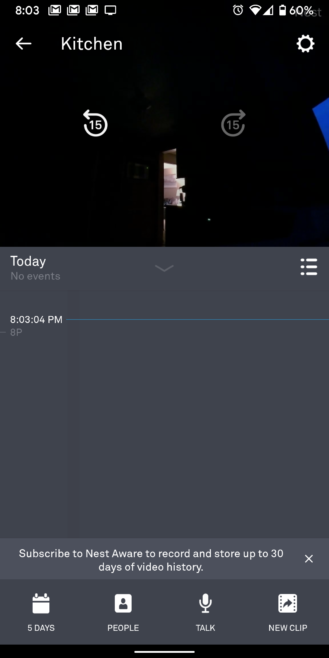 The way the Nest Hub Max straddles the Home and Nest apps can also be a little confusing. The Home settings have a toggle for disabling the home monitoring feature, but that's not what it sounds like—it just turns the camera off. Two apps, two different ways of saying the same thing. If you want to actually disable the camera, you have to remove it in the Nest app. 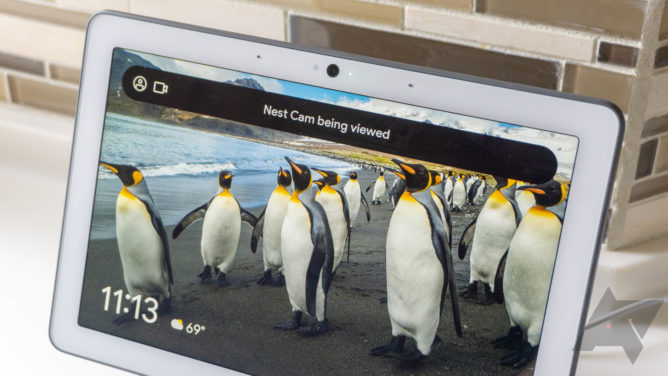 The larger display is great for watching video or monitoring multiple timers in the kitchen, but I wish Google would have done more with the screen at rest. If you want a digital photo frame, this is by far the best one, but I'd like the option to do more with that larger space.

Sure, but maybe not right away. The Nest Hub Max is the best Assistant smart display you can get right now, mainly because it's a larger version of the Nest Hub. The camera-powered features like Face Match are nice to have, but they're not game-changers. I'd feel almost exactly as positive about the Hub Max if it were just a scaled-up Nest Hub with no other hardware changes.

I'm frankly a little disappointed with the Nest security integration. The angle of the Hub's camera isn't ideal, but the lack of night vision is a real problem. Google charges the same Nest Aware subscription rates for this device, which is ridiculous. Nest Aware saves video and recognizes faces, but the display does different facial recognition for free with Face Match. Why are we paying extra for it to recognize faces in another app? The Nest support really feels like an afterthought. 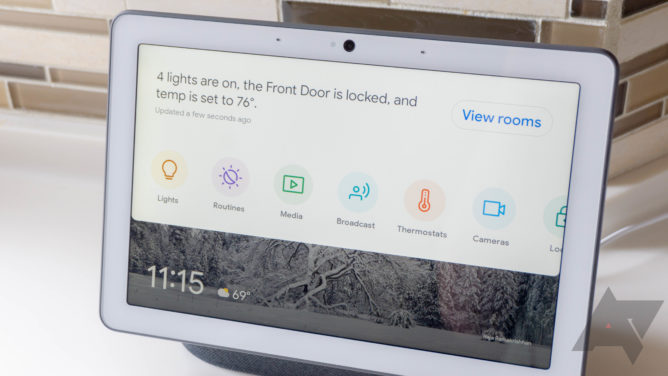 The Nest Hub Max is the best Assistant display, but you might want to wait a bit. If the Hub Max is anything like the smaller Nest Hub, it will go on sale soon. The Hub started at $150 and has gotten down to $60-70 a few times. The Hub Max is starting at $229, which is quite a premium. I'd suggest waiting a month or two to see what sort of deals pop up for the holidays.

It's been a few weeks since our review went live, and the Nest Hub Max is still living in my kitchen where I interact with it on a daily basis. I've found myself enjoying some features even more than when I posted the review, but others are increasingly disappointing. At the most basic level, simply having a larger smart display has been fantastic. It's easier to see the Hub Max from across the room whether I'm running multiple timers or making a Duo call. Despite being large, the Hub Max doesn't feel out of place thanks to the Ambient EQ screen.

I've also found myself watching more video on the Hub Max than I ever did on the Nest Hub. The display recommends YouTube TV content (it plugs into Face Match), which I find pretty handy. I was thinking about canceling YouTube TV before the Hub Max came out, but I'm leaning toward keeping it now. I'm bummed other video services aren't as tightly integrated, though. Netflix doesn't work on the Hub Max at all, just like all the other Assistant smart displays. I really, really want Google and Netflix to get together and fix this. 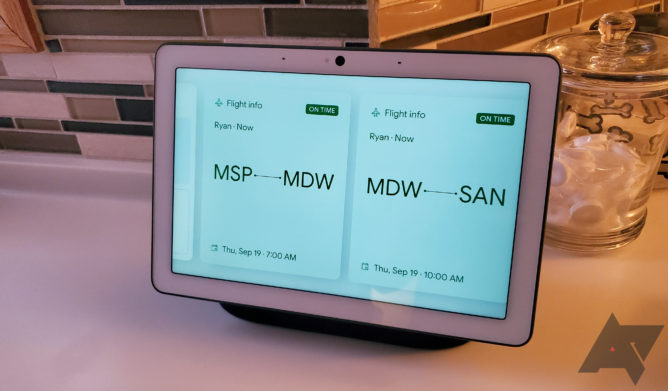 While I still don't think Face Match is a game-changer, it has provided some very cool experiences during my extended testing. I had an extremely early flight a couple of weeks back, and Face Match spotted me as I staggered, bleary-eyed, into the kitchen at 4:30 AM. The morning routine pop-up included cards with my flight info on them, confirming it was on-time. This sort of instant personalization for smart displays could be very compelling if Google focuses on expanding it.

I continue to be spectacularly underwhelmed by the Hub Max's security camera features. It's basically useless even in a medium-dark room, and the angle is only good if you're worried about intruders on your ceiling. The free Nest Aware trial is about to expire, and I won't be paying for another subscription on this device. Making Nest Aware free isn't a great solution, either. Even if you have Nest Aware, you're going to be uploading hours of empty black frames.

Even with the disappointing Nest Cam features, I still like the Hub Max more after a few weeks of use. I stand by my original recommendation that you should wait for holiday sales before buying one, but don't put off the purchase if the discounts are smaller than expected.