For many developers, apps aren't just about the platform they run on, but also integration with cloud services that transport notifications, data, crash reports, ads, and more. The breadth of services and features offered by Firebase ensured many developers would consider it a must-have in their apps, even if only for Crashlytics. With the fourth annual Firebase Summit in Madrid, several new announcements expand the product line even further with products and services that can make development even easier and more effective.

Large development companies can often afford to write custom code to perform countless little tasks, but sort of work can drown small independent developers. Sometimes the best solution is to use a pre-baked solution that just gets the job done and has already been tested and proven to work. This is the idea behind Firebase Extensions. Instead of taking the time to write code for common activities that many other Firebase users need, you can browse through a set of pre-packaged extensions developed by the Firebase team.

A few examples include an image resizer, URL shortener running through bit.ly, and text translation. Firebase is launching with nine extensions to begin with and will be adding more in the future. There's a directory of extensions if you would like to browse some options. Each one can be customized to your needs and they run on Google's cloud infrastructure, so they scale to fit the demand.

Professional software developers recognize that beta testing is vital to building and maintaining a high quality product. There have been a number of methods for distributing test releases of apps, but most of them have been inefficient, complicated, or just don't get the job done. Firebase is aiming to improve this experience with a new App Distribution service that can eliminate some of the complications and make everything easier for your testers. 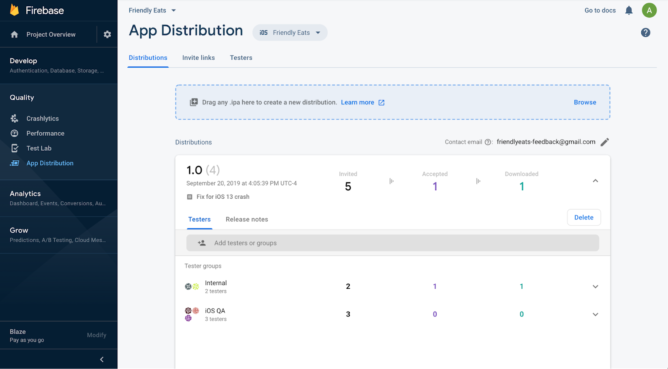 Firebase App Distribution creates a single hub for managing both pre-release builds for both iOS and Android. This will save you from dealing with the unique issues that come with beta distributions in the Google Play Store and Apple App Store. Beta builds can be sent out using the CLI (command line interface), and you can use gradle and Fastlane to automate nearly everything.

If you're interested in running beta tests through Firebase App Distribution, there are additional details here.

Learning from user behavior can help developers build better UIs and make their apps more successful. Google Analytics has been around for web apps since it launched, but Firebase has just added integration so its enhanced tools work with web apps just like it has with mobile apps. This allows the use of the Predictions interface to see user behavior, plus features like Remote Config and Cloud Messaging can now play a role in your testing and analysis.

While they aren't headliners, there were several other new announcements at the event, including enhancements to the Firebase Emulator Suite that bring hot reloads and support for Realtime Database triggered Functions, open sourcing Firebase's Web SDK for Remote Config and Analytics (plus several other older libraries), formal launch of Roles and Permissions into general availability, and more. Check out the Firebase blog post for additional details and and links to get started.