If you'd rather not spend over $1,000 for a flagship phone, or even $500 for a mid-ranger, there are plenty of companies like Nokia and Motorola that are happy to deliver a well-rounded smartphone experience at a seriously budget price. One such notable model is the unlocked Moto G6 Play, and it's now on sale at Amazon for $150.

The Moto G6 Play originally launched for $200 in April 2018, and in the months since its price has occasionally dipped down to around this same $150 level.

Being a modest entry-level phone, the G6 Play has hardware to match, like a Snapdragon 427 processor and 3GB of RAM. One standout is a big 4,000 mAh battery for all-day endurance (and probably then some). Earlier this year Motorola started rolling out Android 9 Pie to the phone, and after a long delay the AT&T model is finally getting its update this week. 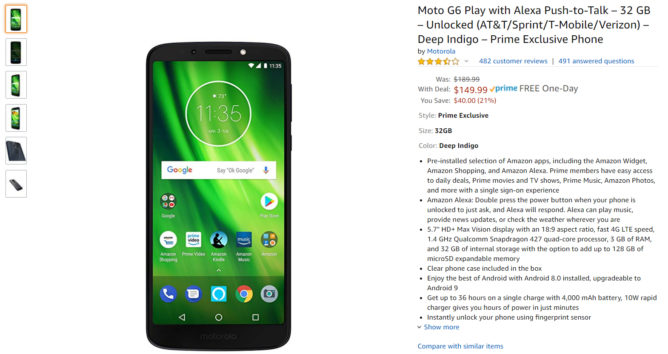 If this affordable unlocked phone from Motorola interests you, head on over to Amazon where if you're a Prime member it's yours for a mere $150.  You could also purchase the same phone from Best Buy for even less if your network is Verizon, AT&T, or Sprint and you're ready to activate service at the retailer. By doing so, you'll save $50 to ultimately pay only $100.