The OnePlus 7T is now official, bringing a 90Hz display and souped-up Snapdragon 855 Plus to OnePlus' smaller, non-"Pro" line of phones. I've spent the last week or so using it, and while that's far too little time for a formal review, I've pulled together a few early impressions for you to ponder as we wait for the phone to be released here in the US.

A smaller 7 Pro? Not quite

The most crucial detail about the OnePlus 7T, as I see it, is the phone's size: It's smaller than the 7 Pro, which is good for anyone that found this spring's model a bit too big. It also means it has a lower-resolution 1080p-equivalent display, like the OnePlus 7 and OnePlus 6. While a comparison to the 7 Pro is merited on price — the new phone starts at $599, or just $70 less than 7 Pro —  the new 7T rests in an entirely different family, even if it's picked up a bunch of specs from the bigger device, like a triple-camera setup and 90Hz screen. 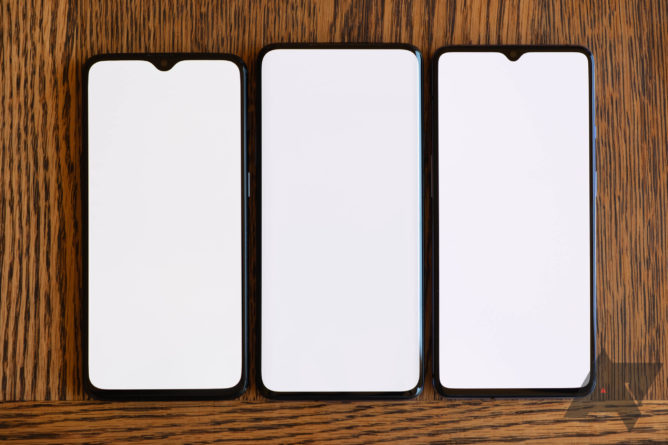 From left to right: The OnePlus 6T, OnePlus 7 Pro, and OnePlus 7T.

Although I'm sure someone is bound to make the statement somewhere, I don't think it's fair to just call the 7T a smaller 7 Pro. Because OnePlus is starting to limit certain phones to certain markets — the OnePlus 7 never came to the US, and it seems that we're skipping out on the higher-end 7T Pro this time — it sometimes feels like the company only has a single line of phones here, but the new "Pro" phones really are a distinct and higher-end series to themselves in the company's lineup. That said, the 7T does address many of my complaints about the previous 7 Pro, while picking up some of its features.

For one, although it's a bit taller, the OnePlus 7T is about as thick and wide as the 6T before it, which I considered to be the perfect width for my hands. It won't have that goldilocks feel for everyone, but I think it's just the right size, even with the taller 20:9 aspect ratio.

Physically, it looks and feels like a OnePlus phone, though it has a notch, unlike the 7 Pro. As with the 6T, I don't find the cutout obtrusive, and it's also smaller this time around, but not everyone will feel the same. The back is still glass, without the benefit of wireless charging, but as a consolation prize the phone is supposed to be able to top up just a little bit faster. I haven't personally noticed a difference when it comes to either charging speed or general performance compared to the 7 Pro. The benefits of the Snapdragon 855 Plus over the original 855 don't seem noticeable to me in normal use, though it could have benefits for mobile gamers. The 6.55" screen may still be too big for some, but I think it's near the ideal size. And although I personally enjoy curved display edges, many will be happy to hear that the 7T has a flat screen.

Although it might be smooth, the screen didn't please me as much as the one in the 7 Pro. It does get pretty bright, peaking at over 1000 nits, but it's not quite up to the standards set by the panel in the 7 Pro. It wasn't the diminished 2400 x 1080 resolution that bothered me, either. The issues I had stemmed from using dark themes at night, which showed off how generally uneven and irregular the display could be at low brightnesses. I also had a stuck green pixel, which wasn't terribly noticeable during the day, but it could be a bit irritating at night.

Android 10's night mode/theme is the new hotness, but it also brings out the very worst in even generally "good" screens, and 7T's display was annoyingly uneven compared to the almost blanket uniformity I enjoyed on the 7 Pro.

Plenty of customization options, but I'd really like if a time-based dark "tone" could be one of them.

On the subject of dark themes, OnePlus has merged its usual customization options together with those offered by Android 10, giving you what I consider to be the best of both worlds in Oxygen OS, even in this latest version. The company's flavor of Android remains one of my favorites, and that hasn't changed with the 7T. OnePlus has kept its light touch, almost "Stock Plus" approach that everyone from die-hard Android fans to first-time purchasers can appreciate. A couple of things, like the company's tweaked gesture navigation which disables the "back" gesture for the top 1/3 or so to access navigation drawers, are genuine improvements that are better than the original. 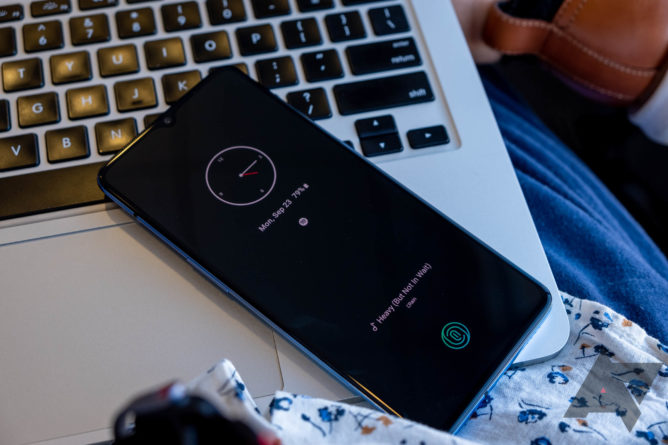 I love the Pixelesque music details on the ambient display, but I'd like it better if it was always-on.

Usually, I end up having to assemble a list of bugs to mention in our review when a OnePlus phone lands (especially if it hits together with a major update) but this time around I've only run into one significant issue: Sometimes it refuses to charge overnight, instead idling at the same percentage until morning, even though it's plugged in. While a reboot fixes it, it's pretty annoying waking up to a phone that's at the same level as the night before

Not what you want to wake up to after a night spent plugged in.

The maddening bug with wide-color applications breaking the red-tinted night mode has also been fixed, which was a personal bugbear.

The camera has a tiny surprise

I'll have more to say about the camera later, but in general, I've been getting similar results to the OnePlus 7 Pro with two exceptions: The telephoto this time around is both better and worse, and the new "super macro" mode that leaked in earlier OnePlus camera apps is actually pretty great. 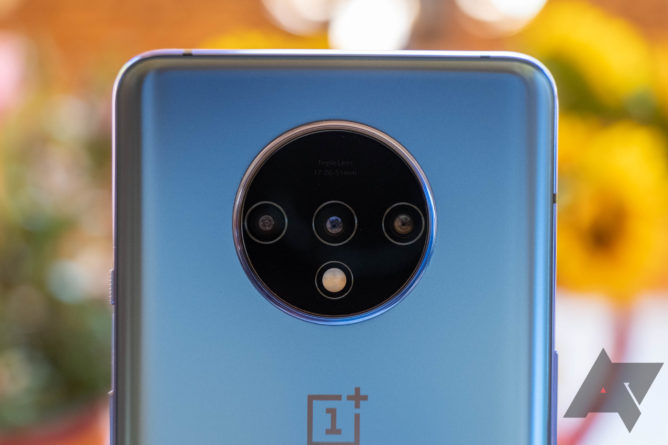 The OnePlus 7T's huge camera hump — I'm not a fan, but it's easy to wipe clean.

While the camera bump might be a whole lot bigger on the 7T, the primary and wide-angle cameras are mostly the same as OnePlus' last flagship. The telephoto lens this time around is just 2x rather than 3x, which might not be quite as useful for some, but it's also a lot sharper than the 3x zoom telephoto in the 7 Pro. It's up to you if the trade-off is between the extra/lost zoom and sharpness worth it, I think it's about even either way. 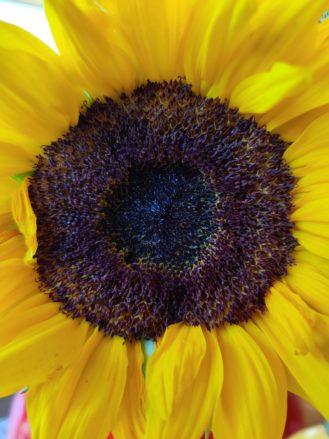 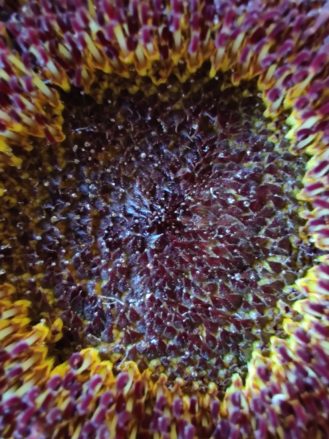 What surprised me the most is the super macro mode, which pairs the wide-angle camera with a new motor only present on the OnePlus 7T which allows you to focus super close. Previously, the minimum focus distance was something like six inches, but in the new mode, you can get as close as one inch away and still get items in focus. Admittedly, that focus is super narrow and only sharp in the center of the image, but with the number of macro shots I regularly have to take for work here at Android Police, I personally find it incredibly useful. I'm not sure if it will come in handy for most folks in day-to-day use, but we tech bloggers are sure to appreciate it.

I know, this is quite a novel I've written here, but these are all just my preliminary thoughts; it's too early to come to any final judgment for the phone. There's plenty of time left for issues to crop up, and I wouldn't feel comfortable contributing to your expensive purchasing decision with only a few dozen hours of screen-on use under my belt. But my general impressions of the OnePlus 7T so far are good. 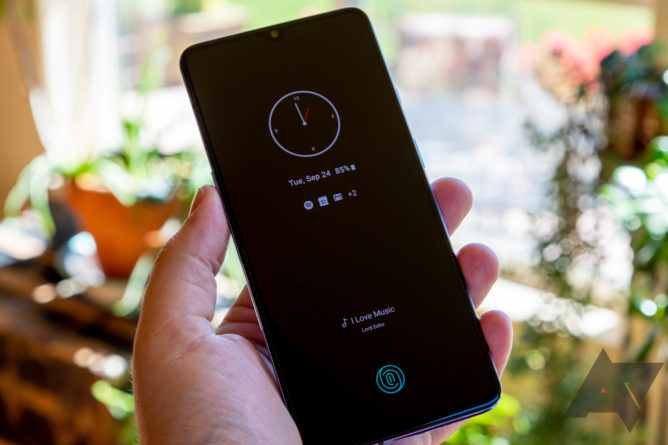 Those issues we experienced with the display uniformity could be limited to the sample we received, and I'll have another to compare it against soon. But in the meantime, I'm generally pleased with the OnePlus 7T otherwise, even if I have to reserve our full thoughts for later. The question of value is also important since the new phone is only $70 cheaper than the 7 Pro.

In the meantime, stay tuned for more details, including a sample photo gallery.