Whether you're preparing for a trip across the world or just getting together a few essentials for a hike, it can be difficult to find space for everything that will come with you. If something is too big, it's staying at home. That's where most smartphone gimbals tend to fail the test: long handles and awkward shapes make them terrible to pack and annoying to carry. Zhiyun, a company highly regarded for its DSLR and smartphone gimbals, is preparing to release a new model called the Smooth-Q2 that's more compact than any smartphone gimbal on the market. Aside from a few basic sacrifices, it's a great little tool to really improve the quality of your videos.

Zhiyun provided a pre-production model for use in this review. The hardware should be identical to the finished product. However, the gimbal firmware and app are still incomplete at this time and there are still some bugs and missing features that should be resolved when the product ships.

As of this review, the Smooth-Q2 is currently available as a preorder on Kickstarter and is expected to ship in October.

What is a (camera) gimbal? Why?

The tl;dr for a camera gimbal is that it keeps your camera level with the horizon and minimizes shake. Gimbals of various types have been around for centuries, but modern versions (at least for use in filmmaking) are usually designed around motors that make thousands of micro-adjustments to precisely control orientation. They've become very popular because they can make a handheld camera look as if it were moving on rails.

These clips were shot at a local skate park. I was walking on uneven ground — the pavement ends just out of view — using the Smooth-Q2 and a Pixel 3 with EIS (electronic image stabilization) disabled.

It's obvious why camera gimbals are used for movies and TV shows, but why would average consumers want one? Simply put, we want to make better videos too. We've all seen shaky YouTube footage that looks like it was recorded by Psy in his hayday. That's perfectly understandable in rushed situations, but camera shake can ruin great memories, like a vacation to the tropics, your family reunion, or even just taking your kids to the park. It may be worth investing in something that can make your videos look better. 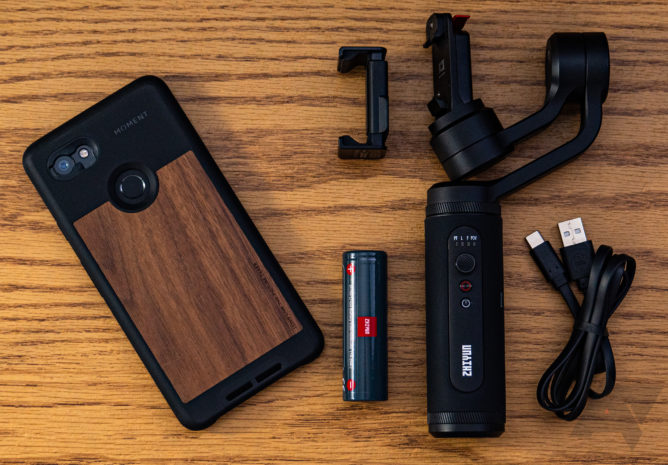 Aluminum makes up about 90% of the Smooth-Q2 with plastic parts only appearing in the control panel and part of the phone mount. There's also a soft touch rubber sleeve covering the handle and coating the inlay of the arms. It all feels incredibly sturdy and very refined. It's heavier than it looks, but I never felt any appreciable fatigue from holding it up.

The base is flat so the gimbal will stand upright without attaching a tripod, but only on perfectly level surfaces. There is a standard 1/4-20 screw mount in the base if you need a tripod or want to use an extension pole.

You can pop the arms together so they are locked and won't flop about when the gimbal is off. This will also put the Smooth-Q2 into sleep mode if it's done while the power is on.

There's a hefty 4500mAh rechargeable battery that can reportedly run for 16 hours on a charge (varies by usage). The battery is also removable, so you can buy extras for long trips.

Charging is done with USB Type-C, which is important for a device you're likely to travel with. However, it's worth noting that the port is set at an angle and a couple of my USB-C cables have slightly thick grips that prevented the plug from seating properly. Just be mindful of this when packing cables.

All gimbals should be balanced before powering them on to make sure the motors do as little work as possible. This improves battery life, prevents jitters, and reduces long-term wear.

Unlike most gimbals that use adjustable-length arms to get a perfect balance, the Smooth-Q2 only asks you to balance the phone within the grip until it hangs flat(-ish). This is faster and less finicky than any other smartphone gimbal I have used, but I'm never really confident that the balance is perfect. 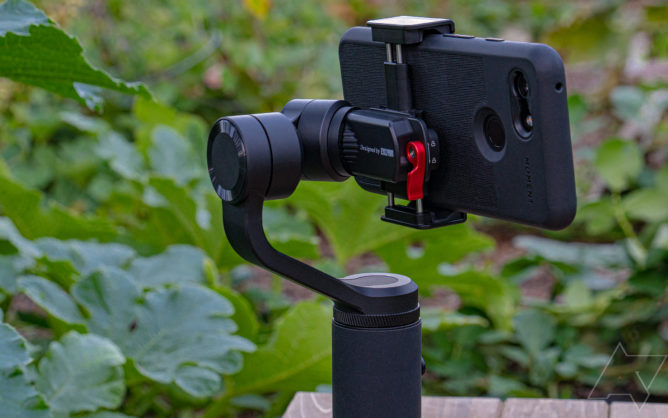 Once you have the right balance, the phone grip is removable by unlocking a lever. This allows you to detach the phone while keeping the grip in place. When you reattach, there's no need to balance it again.

It's also worth mentioning that the motors are strong enough to support fairly heavy accessories like Moment lenses. 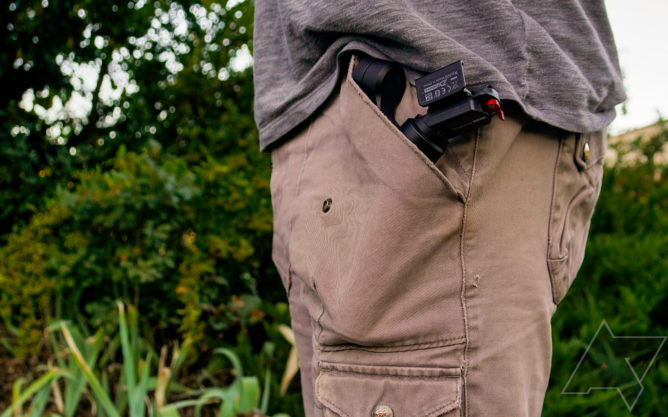 Zhiyun markets the Smooth-Q2 as "pocket-sized," which seems a bit optimistic unless you're using cargo pants or really large pockets as a metric. Regardless, it's the smallest and most portable gimbal available today, beating even the just-released DJI Osmo Mobile 3. There are, however, a couple of compromises with the compact design.

To begin with, the arms don't give enough clearance for the corner of a phone, which means it's probably impossible to invert the handle. In other words, if you are holding the gimbal upright, then rolling it forward until the handle is pointing down, the arm will run into your phone on the way and prevent it from staying upright. The reverse of this motion is fairly popular in movies where a shot begins at an actor's feet and pans up the body to their face.

There are ways to work around this, but they're somewhat inconvenient. Of course, this is only a problem if you are shooting movies or vlogs where that type of storytelling is warranted.

There's also a potential issue with the back motor appearing in the frame of your shot. If your phone has a relatively wide lens, as many do, you may find the camera can catch a portion of the back motor assembly. Zhiyun has added a special "wide angle lens mode" that can be activated by triple-clicking the red record button. In this mode, the arms will orient themselves in a way that should keep the back motor lower and out of frame. Here's a video with a demonstration of the wide angle lens mode. If you can't use this mode for some reason, or it's possibly not doing enough, you may consider a couple of workarounds:

This is a walking comparison between handholding a Pixel 3 with EIS turned on versus the Zhiyun Smooth-Q2 with an original Pixel XL. The ground here is extremely uneven, so it wasn't really possible to avoid showing footsteps, but it's pretty clear the video is smoother. More importantly, you can see how often the horizon line tilts when a phone isn't stabilized by a gimbal.

The control scheme on the Smooth-Q2 is very uncomplicated and makes it easy to use without much of a learning curve. A joystick can direct the gimbal, and pressing it like a button will cycle through follow modes. Double-pressing the button cycles back through those modes in reverse. A red button triggers the shutter or begins recording video, and then there's a power button for checking battery level and powering it on or off... Duh.

Also, if you choose not to use Zhiyun's ZY Play app, the shutter button on the gimbal can also be used to trigger the shutter on your phone's default camera app via Bluetooth.

Like most gimbals, you don't actually need to use an app if all you need is to keep your phone steady. However, it is necessary if you want any of the advanced features that take control of the gimbal to accomplish more interesting shots. These include: 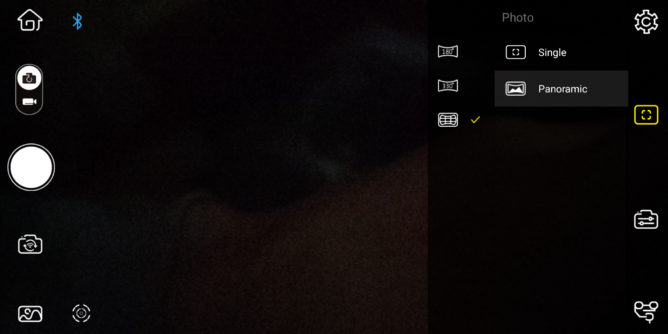 In full disclosure, some features in the app weren't working at the time of testing, like the object tracking and dolly zoom. Again, this is pre-production firmware and a beta app. Zhiyun has shipped plenty of gimbals with these same features, and they are all controlled by the same app, so it's safe to expect they'll be working when the gimbal ships in October. This is just an acknowledgement that they couldn't be tested during the review period.

Also missing from the app are options for adjusting movement responsiveness and joystick speed. For casual use, these settings might not be very important, but they matter quite a bit if you're shooting fast-moving subjects at a sporting event or slowing down your movement to create very dramatic shots. A sport mode is fairly common in many recent gimbals, but I'm not sure if that or any other granular settings are planned. 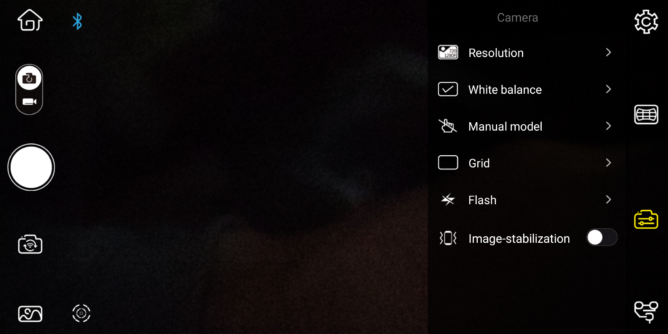 Final impressions of the Smooth-Q2

Zhiyun wasn't messing around with the Smooth-Q2 or what makes it special; this really is a great gimbal for travel. It's compact enough to fit into your luggage or a small backpack without displacing other things.

This is also the easiest and most approachable gimbal I have ever used. It behaves well right out of the box and should be simple enough for anybody to pick up and use without much of a learning curve. All things considered, it's basically the perfect gimbal for casual users and first timers. 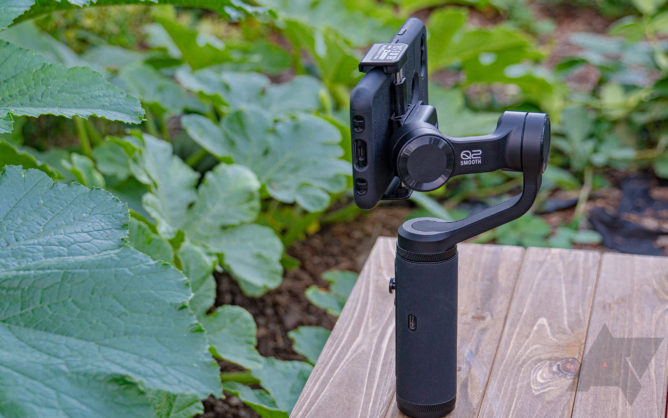 The Smooth-Q2 lacks some of the advanced features that smartphone filmmakers might be looking for, like switching into unusual follow mode combinations or changing focus with the handle; but that's a good thing because it removes common pitfalls that often frustrate and confuse casual users. The limited range of motion (i.e. the gimbal arm that doesn't clear the phone) adds to this feeling because it means you can't achieve some advanced shots. If you're after all of this stuff, check out the Zhiyun Smooth 4, it was designed with smartphone cinematography in mind.

Yes: If you would like to create smoother videos that look great, the Smooth-Q2 is a solid choice. It's easy to use, extremely portable, and does its job very well. The build quality is great and seems like it should be durable enough to last through plenty of trips.

Of course, this is the type of gadget that won't fit the needs of every buyer. Smartphone filmmakers and some vloggers that want to do more advanced camera moves are probably better served better by a different gimbal. And on the other side of things, people that don't regularly make videos are generally not shopping for gimbals. The Smooth-Q2 is for buyers that land somewhere between those two groups.

You want a very portable, easy to use gimbal.

You either don't shoot video or you need more than this gimbal can offer.

The Zhiyun Smooth-Q2 was originally available for preorder through Kickstarter and shipped to backers in October. The Kickstarter campaign is now complete. You can now buy it directly through the links below.

This review was updated with minor adjustments to acknowledge the max payload of 300g and the addition of wide angle lens mode. It was further updated to point out that Zhiyun advises against the use of a counterweight on this gimbal.