Most Google Pixel owners know that Android 10 has been available for their devices since early September. Today some of those handsets are already being updated, as users with the Pixel 3, 3a, and their XL variants have been waking up to notifications that a new Android release is already available.

The new build in question is designated QP1A.190711.020.C3 and is still numbered as Android 10.0 — no point release here. No changelog has been published yet for this update, which weighs in at 1188.2 MB (one of our tipsters reported slightly larger numbers). 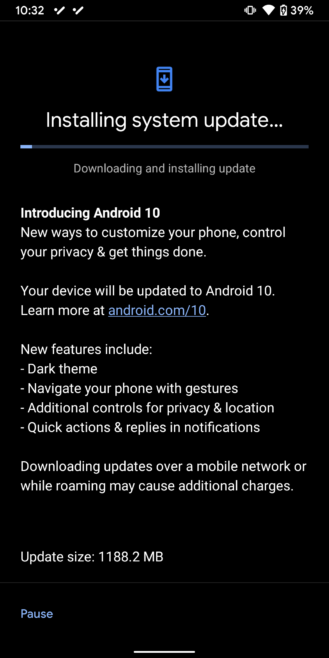 While Google's yet to share details of what's new in this release, we're probably looking at something like a few bugfixes. If and when we do get any further information on the changes, we'll update this post.

The latest version of Android 10 can be installed OTA, or you can flash the C3 build to your Pixel manually via ADB.

If you've been curious about just what Google was up to with this update, we're finally able to shed a tiny bit of light on the subject, thanks to the publication of a system update notice for the 3a XL on Verizon.

There, the carrier describes this new C3 release as:

The current software update improves the performance of your device after the iOS 10 update.

We're going to assume that Verizon missed its morning cup of coffee and meant Android 10 update, rather than iOS. But as for the update itself, it looks like we're not getting anything better than non-specific performance tweaks. That's more than we knew before, at least.

Google also seems to have resolved whatever was causing it to deliver the update as a full-size release, and today users are reporting receiving the new build as a much more properly bite-sized OTA distribution.