Home Minis seem to be growing on trees for Google. The company won't waste an opportunity to offer them for free with a Pixel 2, Nest products, on eBay or Google Express, or with a Spotify Premium Family subscription, and now it's giving them away to some Google One subscribers too.

Paid One members with plans over 2TB (i.e. those who are paying $10/month and more) are starting to get emails notifying them of their freebie. But even if you didn't get one, you should head over to one.google.com and check for a card to "Claim your Google Home Mini - on us." Artem got the card even though he didn't receive any email. He was also able to redeem his freebie from the Google Store. 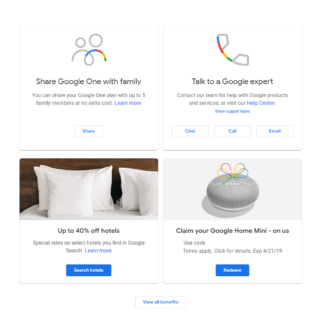 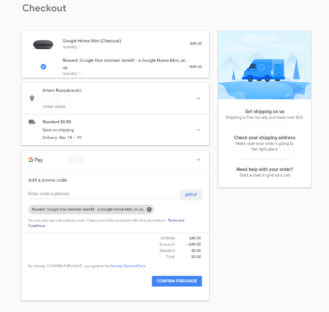 According to the terms, the offer is valid until April 21 for users on the Google US Store who have activated a 2TB+ One plan before March 4 — so there's no point in subscribing now just to get the freebie.

If you're one of the seven people left on the planet whom Google hasn't yet given a free Home Mini, and you were a little peeved that this Google One giveaway was US-only, we've got some good news for you.

Google One users in Canada have recently been receiving notices that they can now redeem a free Home Mini of their own. Those who are getting that email have until the end of August to respond and claim their freebie. We know that your One account has to have been created prior to August 6 to be eligible, but haven't seen any further information on possible storage-level requirements.

Google has never been shy about hooking users up with Home Mini hardware on the cheap (if not outright giving the stuff away) and lately it appears the company has been extending this Google One promotion to cover more and more nations.

Over the past several days we've received what can only be described as a boatload of tips coming in from readers in the UK, notifying us of the free Home Mini offers they've received for having paid Google One accounts.

While the earlier US Home Mini giveaway was restricted to users with higher-tier One plans, this latest UK wave has been including even the lowest 100GB level, so everyone who's paying for storage at all should be eligible.

With new Mini hardware seemingly on the way, is Google just trying to blow through its stock of old devices? Perhaps, but free is free, so we're not about to get too picky.

Shortly after sharing word with you about UK availability, we've learned that the free Home Mini offer for Google One subscribers is also being extended to users in Italy.

This promo is spreading and, according to a Google One team member, is now available in nine countries beside the US. Here's the list:

Trying out Google Play Pass? Here's what to look out for