Yahoo Mail isn't quite as ubiquitous as it once was, but plenty of people use both the app and email service for their long-form communication needs in 2019. Today Yahoo is pushing out an entirely new version of the app, with modern focus on one-handed use with taller phones, faster access to attached files, and tools to help you save cash — plus a strange (but potentially useful) grocery coupon clipping tool that has nothing to do with email. 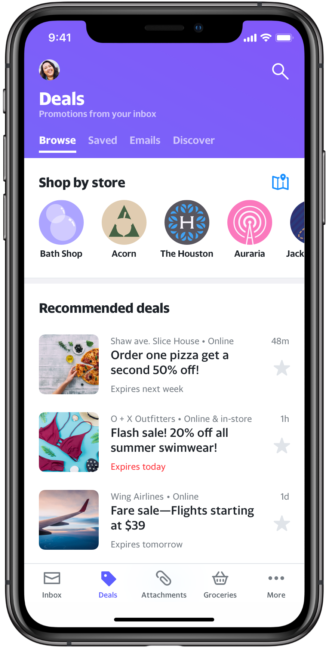 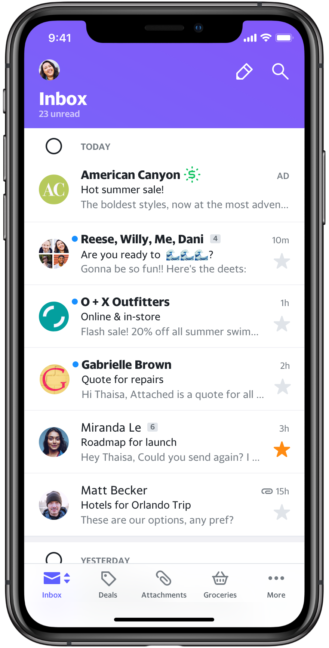 The headlining feature in the new version is an entire visual refresh that's meant to work better on taller, bigger-screened phones popular in recent years. As Samsung did with its One UI, Yahoo moved more of the app's interactive elements to the bottom of the screen for easier one-handed use, plus customization for both the app's overall theme/looks and deeper control of notifications.

With navigational changes being such a big part of the redesign, we've also got some new navigational "Views" as well, each catering to a different need:

If the whole new “grocery” tab seems out of left field, that's because it is. It has nothing to do with your email, but Yahoo claims that it's building on folks' desire to save money when they put up with mass mailing lists and spam. With it, you can clip coupons from 25 partner retail chains and even have them applied directly at the time of checkout by tying it into their rewards programs. It all has nothing to do with email by any stretch of the imagination, but Yahoo thinks you might dig it.

Yahoo gave us early access to the redesigned app, and I ran into a few issues while trying to get it to work. Initially, it wouldn't add my personal Gmail account, and repeated attempts to connect it resulted in the app crashing, though it did ultimately pull itself together to work as intended. Once you've logged in, there's quite a wait as it imports all of your emails over to Yahoo's servers.

I was honestly a little concerned about that last detail, given the privacy snafus Yahoo can't seem to avoid, but it's required for much of the new functionality. I asked about the security that was in place to help protect users and was told that its "smart" features are primarily processed off-device, requiring that your email be stored on Yahoo's servers (even if you use a third-party service like Google's Gmail), though every connection is encrypted.

In my brief time with the redesigned Yahoo Mail, it seemed okay. While most of the added functionality didn't seem to offer many benefits to my Inbox-remembering, now Gmail-adapted workflow, others could find its added tools more useful. It was occasionally a little janky and unstable, but I was using a pre-release version.

Interested parties can check out the new Yahoo Mail app over on the Play Store starting today.