Like most other high-end smartphones these days, the Mate 30 Pro comes clad in glass front and back, with its 6.53-inch display curving 88 degrees around the sides. Its camera module on the rear is quite reminiscent of Nokia Lumia phones of old or the Nokia 7.2 of new. Apart from a medium-sized notch, the curved screen is barely obstructed by any bezels at all, coming with a smaller chin than most other Android devices. 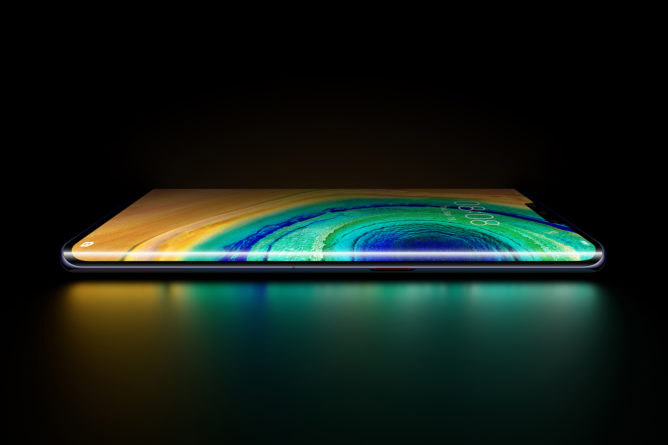 The Kirin 990 SoC with its integrated 5G modem should give the Mate 30 Pro a better battery life than most other current 5G phones which have to rely on extra circuits to receive the new transmission standard. It's coupled with 8GB of RAM and 256GB of storage. Although lacking Google apps, Android 10 is still pretty recognizable. Huawei offers a system-wide dark mode capable of inverting apps that don't natively support it and brings a new custom always-on-display interface to the table.

The Mate 30 Pro clearly focuses on photography. It has three photo cameras on its rear: a 40MP f/1.8 primary lens, a 16MP f/2.2 ultra-wide camera, and an 8MP 80mm f/2.4 OIS telephoto, accompanied by a laser focus. Despite lacking a dedicated periscope zoom camera, the company claims its software extends the 3x optical telephoto zoom digitally, making it comparable or better than other flagship's capabilities in this regard. Optical and digital image stabilization certainly helps with that.

The three photography-focused lenses are joined by another 40MP "Cine Camera" dedicated to video shooting. It supports 4K 60fps filming and enables low-light videography with its ISO 51200. When 60fps isn't enough, it also gives you a 720p 7680fps ultra-slow-motion mode (yes, you read that fps number right). A real-time bokeh mode is supposed to create the illusion of a low depth of field, but it's questionable how well this will work.

The front camera is joined by a few other sensors that have a couple of tricks up their sleeves. They can recognize gestures and follows your eyes to intelligently rotate the screen, but most importantly, they provide a secure face login mechanism à la Apple's Face ID. For redundancy, Huawei also added a fingerprint reader sitting inside the display. 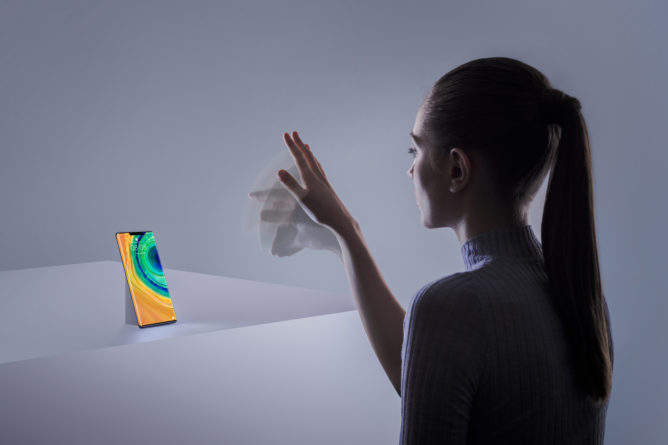 The 30 Pro comes with a 4,500mAh battery, which can be charged at up to 40W wired and 27W wirelessly. Just like the Samsung Galaxy Note10, the Mate 30 Pro is also capable of reverse wireless charging. Another special characteristic is the lack of a physical volume rocker on the device. Instead, it uses touch-sensitive panels, letting you slide across its side to adjust the volume or tap the frame to trigger the shutter in the camera app.

The two phones announced today are pretty similar but remain distinguishable. The Mate 30 doesn't have a curved display, opting for a regular flat screen instead, and sports a smaller notch lacking the gestures-enabling sensors. At 6.62 inches, its display is bigger than its sibling's. While it retains the same Kirin 990 chip, it loses the 5G capabilities and only has a 4,200mAh battery. It also doesn't have the video camera, though it keeps the same array of photography-focused lenses.

An additional Porsche Design Huawei Mate 30 RS variant was also introduced today, sporting 12GB of RAM and 512GB of storage and a unique back design. Since the devices are coming without Google apps, they also won't be able to take advantage of Google Play Services that allow applications to access some system APIs, mapping data, and push notifications. To combat this issue, Huawei introduced its own HMS Core suite replicating Play Services functionality. The company touts more than 45,000 apps are already integrated with HMS Core and says it incentivizes developers with money to port their apps, but it remains to be seen whether Huawei can convince the most important third-party developers. Making matters more complicated, CEO Richard Yu is telling reporters that you can't sideload the Play Store and need to rely on the pre-installed AppGallery or other third-party sites and stores like Amazon.