Google Fi made a name for itself because of its transparent pricing. A base fee for unlimited calls and text messages plus pay-as-you-use data, with costs capped at a certain threshold to keep you from breaking the bank. Still, people in need of a lot of data might prefer fixed costs for budgeting reasons, and they'll be pleased to learn that Google now offers a $70 unlimited data plan for a single line.

Like Google Fi's regular plan, the price gets lower when you share it with others. Two and three lines will set you back $60 and $50 per line, respectively, while four to six lines cost $45 per individual user. Keep in mind that these prices exclude taxes and government fees.

The unlimited plan includes 22GB of unthrottled data per line. Google also notes that it may limit videos to 480p to help you eke out more high-speed data before the throttle kicks in, even though only around one percent of its current customers ever reach that amount. Just like Fi's regular plan, the unlimited one also allows you to go online and text at no extra charge in about 200 destinations around the world and gives you free international calls in 50 places. You'll also receive 100GB of Google One storage (which costs $2 on its own), for use with Google Drive, Gmail, and Android backups. 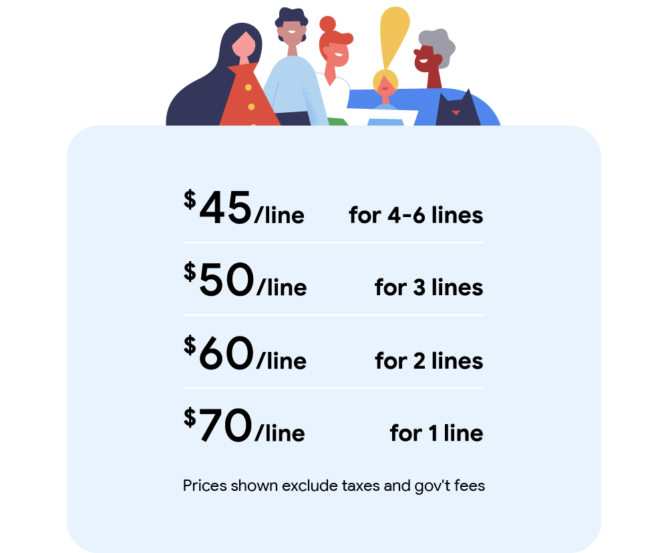 Compared to unlimited plans from other carriers, pricing seems a little high, especially considering the relatively low throttle cap. Fi doesn't lock you into a contract, though, and gives you internet access in way more international locations than others, so if you're traveling a lot, it might just be worth it. On Fi's regular plan, you'll see yourself paying a minimum of $20 for nothing but calls and texting and a maximum of $80 for 6GB or more, but the throttle already kicks in at 15GB here.

To incentivize you to switch, Google is offering 50% off a Pixel 3 or 3 XL when you purchase and activate through Fi, valid through September 18 or until they run out of stock. The company is slated to release its next phone on October 15, so Pixel 3 prices are already dropping across the board without requiring you to switch carriers.

Since Fi’s launch in 2015, we’ve had one plan, the Fi Flexible plan, that gives you the flexibility to pay for just the data you use. As we’ve grown, we’ve heard that many of you want the simplicity and predictability that comes with paying the same price each month. So today, for the first time ever, Fi is adding a second plan: our Google Fi Unlimited plan.

The new Unlimited plan gives you unlimited data, calls and texts at a low cost for multiple members of your family. You’ll also be covered when you connect with friends and family at home or abroad, as our plan includes free international calls from the U.S. to 50 countries and territories, and unlimited data and texting abroad in 200 destinations at no extra charge (and with no setup required).

Our Unlimited plan also comes with a Google One membership with 100 GB of cloud storage and extra benefits like expert support across Google, discounts on Google products, and more. Plus, if you’re using an Android device, you can automatically backup your phone to keep all of your important files and photos.

With this plan, we will reduce speeds after 22GB of usage per person in a given month (this applies only to the heaviest data users, less than 1 percent of Fi's current users). We also may optimize video streaming quality to 480p to extend your access to high speed data before you hit 22GB.

Our Unlimited plan gives you peace of mind knowing that you can reach family and friends wherever they are, while keeping costs low. If you prefer to just pay for the data you use, our Flexible plan isn’t going anywhere. And as always, Fi has no contracts or activation fees.

To help you get started, until September 18 (or while our supply of phones lasts), you can get 50 percent off a Pixel 3 or Pixel 3XL when you purchase and activate on Google Fi . You can also join today with your own phone by checking its compatibility. Whether you already use Fi or are thinking about giving it a try, we hope you give one of our plans a spin.