360-degree cameras are particularly useful for sports videos, allowing you to capture everything around you while you're focusing on your activity. You only need to decide what to show your audience when you're editing. Xiaomi offers one such camera with the Mijia and even sells it in the US, unlike its phones. You can grab it for $150 on Amazon right now, $50 cheaper than the price it has been going for lately.

The Mijia is equipped with two Sony sensors front and back, allowing it to record 3.5K 360-degree 30fps video and take 24MP images. Digital six-axis stabilization helps it stay smooth during handheld-usage while standing on a snowboard, and an IP67 water-resistance rating makes it suited for use in the snow in the first place. Just note that you can't submerge it into water deeper than 1m, so you shouldn't use it in the pool or at the beach. With the help of an integrated Wi-Fi connection and the MI Sphere Camera app, you can edit and share videos right from your Android (or iOS) device. The built-in 1,600mAh battery supports up to 75 minutes of filming. 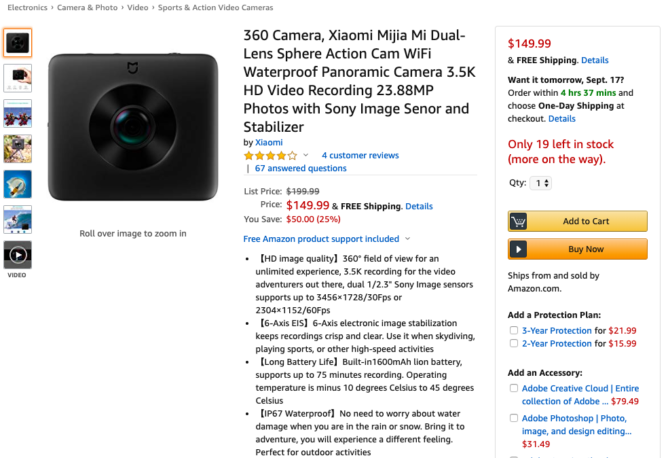 If you're looking to get into 360-degree videography or only want to use one during your annual skiing trip, the Xiaomi Mijia is a capable bit of kit. While there are certainly more sophisticated cameras on the market, they also cost much more — at $150, the Mijia is a steal.

OnePlus 7T series to be revealed in two parts, September 26 and October 10