YouTube launched its 'Leanback' interface in 2010, originally designed as an automatic playback client for when you didn't want to search and navigate through videos yourself. It later turned into a full-fledged web application for control with a remote, intended for use with smart TVs and other similar devices. Unfortunately, the Leanback web app is about to join the Google Graveyard.

Visiting youtube.com/tv or youtube.com/leanback (which redirects to the former) now presents a message. "This version of YouTube will be going away soon. You'll still be able to view youtube.com, but you can get an optimized experience on a supported device." 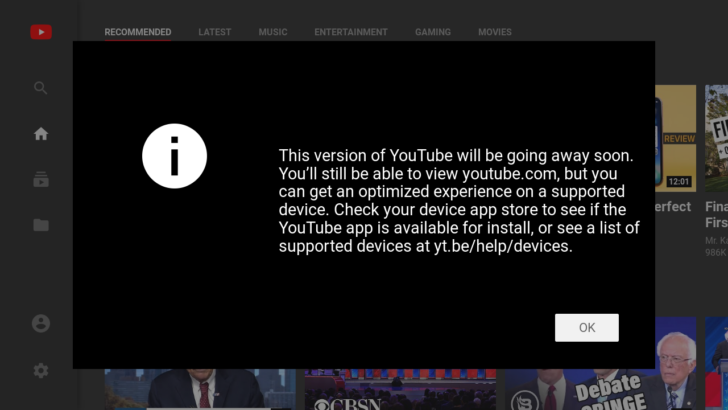 It seems likely that this is an attempt by Google to limit streaming boxes, home theater PCs, and other TV-based devices from accessing YouTube unless there is some of licensing agreement between the manufacturer and Google. Since the leanback interface is simply a web app, it could be used on Raspberry Pis, home theater PCs, smart TVs with a web browser, and much more.

Leanback is what allowed Amazon's Fire TV products to still access YouTube after Google pulled its official app. Putting my tin-foil hat on for a moment, perhaps Google is doing this to prevent Amazon from retreating to unofficial TV apps if the companies' current partnership ever sours.

Whether or not that's true, the fact remains that Google is still going to be developing Leanback (or something very close to it), since it's what powers the YouTube app on smart TVs and Android TV. It's annoying that Google is artificially restricting the TV YouTube interface to only 'supported devices,' but at least we'll always have the Kodi add-on.

According to a report from Variety, the Leanback interface will be shut down on October 2nd. The site didn't mention a specific reason for the decision, but a source familiar with the matters told Variety that Leanback 'was never meant to be used by uncertified devices.'

Monday deals: $25 off Echo Show 5, plus savings on Anker Nebula Capsule and more