Since the OnePlus 7 Pro went on sale a little before the standard OnePlus 7, and only the former was available in the US, it would seem like a good bet that the first date will focus on the 7T Pro. The lower-specced 7T would then be expected at the October event, but we don't know any of this for sure. There have also been rumors that the opposite will be true.

The teaser image shared with us calls attention to the 90Hz display with the tagline "smooth like never before," perhaps suggesting that even the smaller phone will have the high refresh rate that so impressed us on the last Pro model. Leaked specs have suggested that both phones will come with the overclocked Snapdragon 855+ processor, at least 8GB of RAM, and an improved triple rear camera setup. 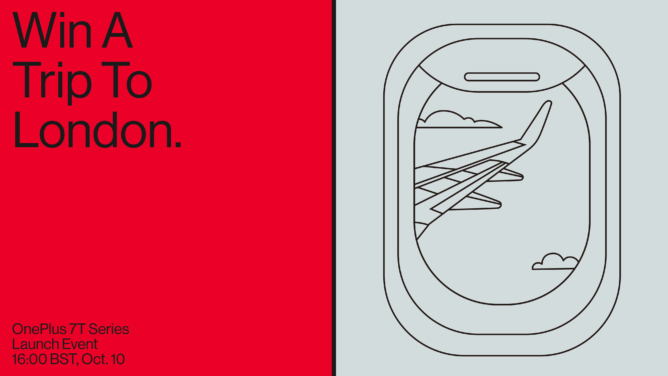 A competition is being held that could see two lucky winners flown to the event in London on October 10. If you're from North America or Europe, you can enter on the OnePlus Community site.

16 Sept, London. The OnePlus 7T Series is coming to London, with a launch event at 4pm BST on 10th October. The event will take place at the brand new Magazine London venue in North Greenwich with tickets going on-sale from 20th September via OnePlus.com.

With the OnePlus 7 Pro, the company pioneered the incredible 90 Hz Fluid AMOLED display, and now, the OnePlus 7T Series will showcase the latest innovation from OnePlus, giving users a super-smooth experience like never before.

Pete Lau, CEO and founder of OnePlus said, “OnePlus has been built around the idea of fast and smooth, and we constantly challenge ourselves to be even better. Your smartphone’s display is the element you interact with the most, so it makes sense to invest in screen innovation. I’m really excited to hear what our users think of the OnePlus 7T Series.”

As always, OnePlus will celebrate the launch with users, who will see the global debut of the OnePlus 7T Series with the OnePlus staff and other community members, participate in a range of interactive experiences and exclusive demos, and earn swag and goodies which will only be available at the event.

OnePlus fans across the globe can also watch the launch event live via the OnePlus official website, or on our YouTube and Twitter accounts, with the main event starting at 4pm on 10th October.

The first instalment of the OnePlus 7T Series will initially be announced in India on 26th September. But there’s much more to come in London.

And OnePlus is also giving two lucky people a chance to win a trip to attend the global launch in London, with flights and hotels all paid for by OnePlus. If that wasn’t enough, they’ll also have lunch with Pete Lau ahead of the launch. Simply visit the OnePlus Community for more information about how to enter.

The Xiaomi Mijia 360 action cam hits $150, its lowest ever price on Amazon

Outlook gains support for POP3 on Android, 30 years after the protocol's invention