OnePlus isn't the only phone company looking to launch an Android TV for the Indian market. Motorola has just taken the wraps off a whole line of Android TVs at its own event, made specifically for and in India. The new range of TVs sport wider viewing angles thanks to IPS panels with high-brightness HDR10 support, plus stronger audio chops, and all powered by Android TV.

Very nearly the most tedious announcement you'll ever watch.

The TVs will come in six different models ranging from 32" to 65", covering a range of resolutions at the low-end, up to UHD for the larger models. They should all be IPS panels for wider viewing angles, with high brightness and HDR support. The chipset powering Motorola's new TVs isn't defined, but it's a 1.1 GHz quad-core SoC tied to 2.25GB of RAM and 16GB of storage, plus an (also undefined) Mali GPU, all running Android TV via Android 9.

When it comes to sound, you get a pair of 30W front-firing speakers. And for those hoping to play Android games on the big screen, it comes with an Xbox 360-looking Bluetooth controller. TVs will even be made in India. 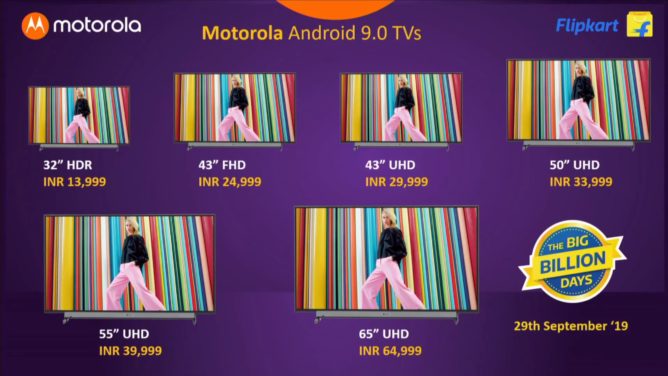 Prices range from INR 13,999 to 64,999 based on size and specs, and they'll be available on Flipkart starting September 29th for the company's "Big Billion Days" event.

Looks like OnePlus has some competition in the high-end, low-price Android TV market in India. With the OnePlus Indian launch event set for September 26th, we'll know soon how Motorola's lineup compares.

Stadia may be on the horizon for Android TV