Note: A few older items (i.e. Camera, Messages, and Play Store) were intended for this post a while ago, but it was accidentally never published. They've been included because there are still some interesting things to discuss.

Gboard updates have been shifting increasingly towards polish-oriented changes lately. The latest update brings tweaks to a couple of settings and puts down a few more roots for a new keyboard page that's coming at some point. 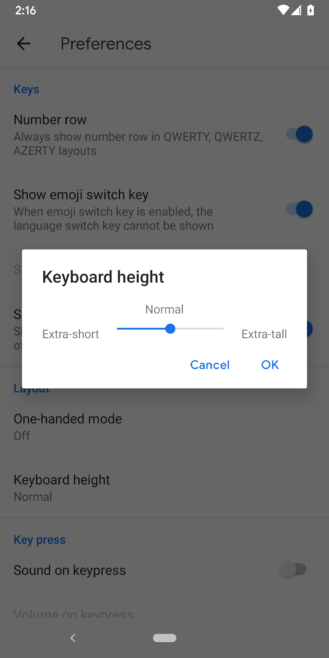 Two new options were added to the Keyboard Height setting, both at the extreme ends of the spectrum. You can now find Extra-short and Extra-tall capping the slider, bringing us to a total of 7 steps from the shortest to the tallest. In the animation above, you can see how each level effects the key height, where the long-press symbol is drawn, and how much screen real estate remains. 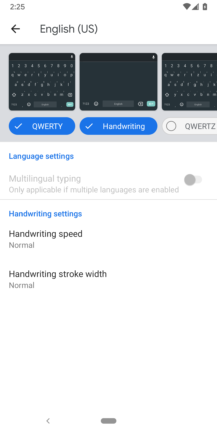 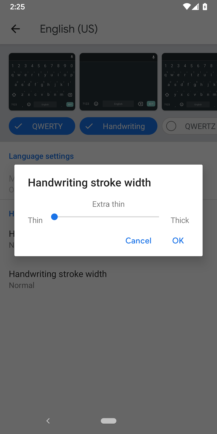 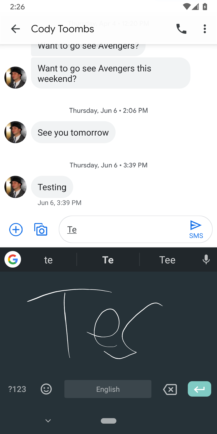 The other new settings to be found in this update are in the Handwriting keyboard. It's now possible to customize the handwriting speed and the thickness of the line (called the 'stroke') that is drawn.

This can be enabled by opening the Languages screen, selecting a language, then turning on the Handwriting keyboard within. Not all languages are supported with this keyboard, but it should be pretty widely available for most Western scripts.

Following up on the v8.6 update that contained the first signs of a Symbol keyboard, a whopping 315 new Unicode symbol names were added in this update. This brings the current total of named symbols in Gboard to 485; but with there being nearly 140,000 symbols designated in the latest Unicode spec — most for specific languages, and some aren't even visible — it's safe to assume Google won't be adding them all. Here's a short sample of some of the new additions. (I didn't want to bog down browsers with a full list.)

Dark mode has become all the rage as most apps are quickly rolling out with the new look. While YouTube joined the party almost exactly a year ago, it was just a toggle in the settings screen that you could set and forget. However, some users prefer to have all of their apps follow the same basic theme if it changes (perhaps throughout the day), which is now supported in Android 10. It looks like this will become an option in YouTube at some point. 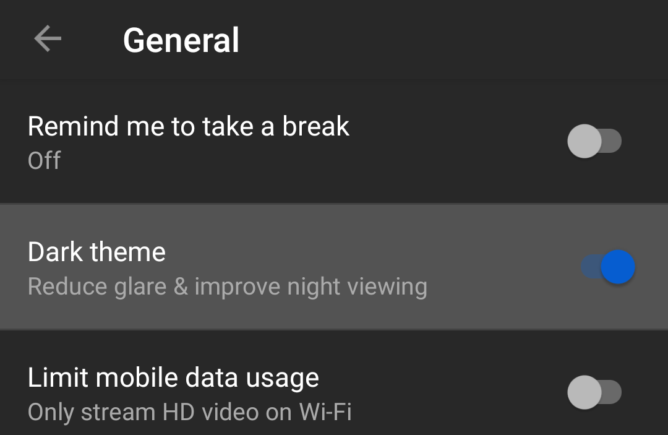 The setting is fairly basic, giving users the option to choose the Light, Dark, or "default" theme. In all likelihood, this should replace the toggle that only flips between the light and dark theme.

This setting is obviously going to be Android 10 and above, but it's unclear if it has already become available for any users. It wasn't visible on any of the devices I tested, but it may be activated remotely.

If you're not running around in a vehicle that supports Android Auto, there's a fair chance you're still using Android Auto for its on-phone driving mode. At this point, you probably should have heard Google is going to shut down that driving mode — cue memes about Google killing another thing — and will be replacing it with Google Assistant. So, it's not really news that this is happening, but this section is here to confirm the relevant text has been added.

The message will open with a title that reads, "Meet your new driving Assistant," and goes on to explain that phones will be migrating to Google Assistant's driving mode and offers to let you try it now. A second line was also included that includes a space for a date when the change will eventually be forced.

Of course, it's super unclear how this plays in since Google has also posted about plans to release a separate app that sounds like a functional clone of the Android Auto app, but just for the phone interface. I suppose it'll come together in some way, and maybe these strings won't be used until everything is ready to shift over to Assistant.

Along with the change that moved Night Sight into the main carousel and a possible reveal that the Pixel 4 may include a telephoto lens, the latest Camera update included a few more hints about things that may be coming.

A mysteriously named "McFly mode" is mentioned in some newly added text found in the latest update. Those lines, which bear the name "rewind", also have a corresponding icon that looks like the standard rewind playback control.

At the moment, the text doesn't give away any more detail than this, and there isn't much in the way of obvious code, so we're basically left to speculate.

The obvious note is that McFly references the main character from the Back To The Future movie trilogy. One possible explanation for this feature or mode is that it will become an object removal tool Google originally demonstrated an object removal at I/O 2017, but about a year later admitted the feature had been delayed and deprioritized. Of course, that movie franchise famously featured photos with characters that faded into or out of existence as history was altered. (sorry, spoiler alert?)

The other possibility that comes to my mind is more closely linked to the choice of using the rewind icon for the button. That may simply be a placeholder, or it could be a clue about a basic form of time travel. Yes, that's a bit hyperbolic, but bear with me. Since phones begin capturing before the shutter button is pressed, and only begin storing data once it's pressed, the new feature may simply take advantage of that extra data and allow users to choose a photo from before the shutter button was actually pressed.

With the Pixel 4 fast approaching, Google will surely want some cool features to demonstrate on stage, and either of these would make great presentations.

Switching to a less innovative, but possibly just as helpful feature, the Camera app appears to be preparing a new hint to users. Much like suggestions to use Night Sight or to clean the camera lens, Google's camera may begin dropping a little advice to raise your phone up when you're taking a selfie.

The specific advice in the text calls for the camera to be positioned above you and pointed downward. The knowledge is hardly new, as any selfie aficionado could have told you, but it's something first-timers may not have heard or noticed. However, it's not the best advice, and it's arguably pretty sexist.

It's true that researchers have tested this and found that there are correlations to how people want to be seen in photos, but it differs heavily by gender. Women generally want a camera looking downward on them because it emphasizes their eyes, downplays certain signs of aging, makes the body look thinner, and highlights other physical attributes (cough... you know what I mean). Meanwhile, most men want an upward angle that makes them look taller and gives more definition to masculine features, particularly the chin and shoulders — and it can also be used to minimize or hide their common aging signs like thinning hair and a belly. In other words, Google's advice seems to be aimed at women.

Additionally, the wording is vague and could lead beginners astray. Yes, raising the camera up and pointing it downward is generally good (again, that's for women), but the text just says "above" in a way that sounds to me as if the camera should go above your head. A little too far with this and you'll have one of those cringe-worthy selfies from MySpace, circa 2006. Unless you're trying for a specific look, the safe bet is to hold the camera just barely above your eyes.

And just to be clear, these are extremely simplified points with tons of exceptions, workarounds, and room for creativity. There's no rulebook. But if you're the type of person that would need advice, what is offered here is probably not really for you.

There's only one minor addition in this update, and it's so vague that I almost didn't adding it to this post.

A new line item has been added to the Settings screen with the title "Deactivate?" Strangely, the summary text merely reads "Activate." We're off to a good start... Tapping on the line should produce a dialog box with a link, but the current text doesn't reveal anything of value, so this is all just a placeholder at the moment. It's currently positioned in the group named "User controls" between the settings for requiring authentication for purchases and Google Play Instant.

First spotted in a teardown of Messages v4.4, there will be a new button on message notifications that can be used to hide and re-post a message one hour later. It will be useful for those situations when a message comes in and you just can't deal with it right when it happens.

With the update to v4.6, we can now see that there will be a separate notification channel for Reminders.

At first glance, this might seem like a trivial detail, but it may be one of the best use cases for notification channels. Of course you could assign different settings for reminder notifications, making them more or less important, or muting them so they're not disruptive. But I like the prospect of changing the notification sound for reminders so it's easy to distinguish them from new messages without looking at your phone, which is probably going to come in handy if you're still not totally free to deal with a message after 60 minutes has gone by.

Scrolling Words offers everything you'd want in a crossword game, down to the letter [Sponsored]