Motorola once held a practically unchallenged position at the top of the budget smartphone food chain, but increasingly capable competition from the likes of Nokia and a host of Chinese brands has changed the landscape in recent years. The now Lenovo-owned company has also lost its value proposition edge, with the Moto G7 not able to justify its $300 price tag and the recently announced Moto E6 arriving with a perplexing $50 price hike. At the same time, the brand’s high-end lineup is also in disarray — the Moto Z4 continues the focus on irrelevant Mods rather than genuinely compelling hardware.

Despite these failings, Lenovo-rola has also launched some intriguing smartphone products as part of its Motorola One range. While they have seemingly very little of the old Moto DNA, they all run Android One — outside the US, at least — and are all affordable handsets that lean heavily on particular attributes. The One Power, for example, is all about great battery life and the key selling points of the One Vision are the 21:9 display and 48MP camera sensor. In a similar vein, the Motorola One Action was announced earlier this month with an interesting headline feature — an ultra-wide “Action Cam” rotated 90 degrees that allows you to capture landscape video while holding the phone in portrait. While that sounds like an unnecessary gimmick, I’ve found that it’s attached to a surprisingly capable phone, especially when you consider the £219/€259 starting price. 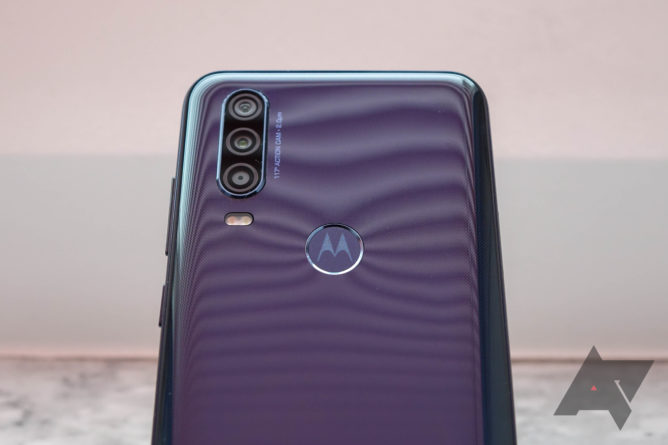 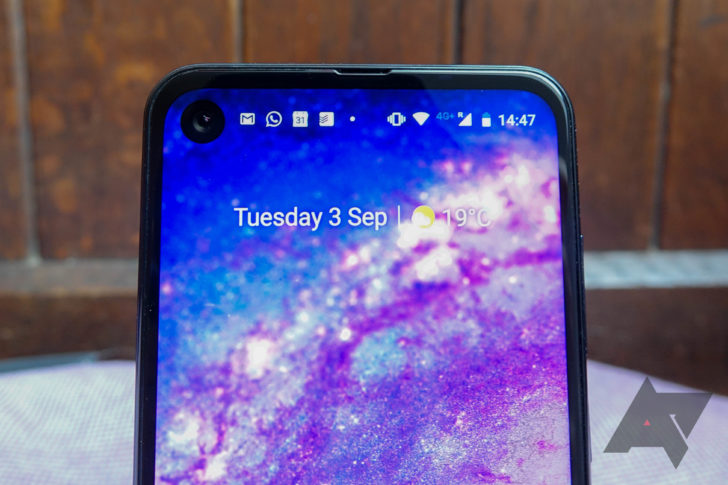 The Motorola One Action shares much with the One Vision in terms of its design. The slightly glossy plastic back has a subtle dot pattern underneath to help hide smudges, which it does with some success. The iconic Motorola M logo lives within the fingerprint scanner dimple and makes for a clean looking rear that curves pleasingly around the sides. I like the understated style of my Denim Blue model, but there’s a white variant for those who want something a little brighter. 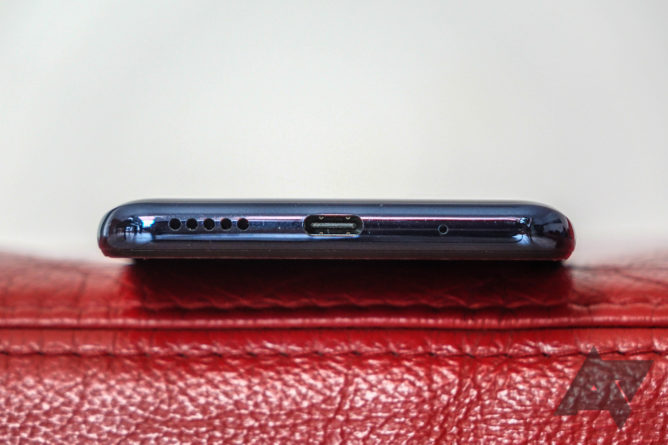 The 6.3-inch 1080p LCD display is interrupted by a sizable hole-punch camera cutout that makes the status bar taller than it should be and content in some apps can be obscured by it. The phone's chin isn't too egregious and it’s thankfully not adorned with the Motorola wordmark. The panel itself suffers from the kind of light bleed and shadowy areas one might expect from a budget LCD, but I think it compares well enough against other phone displays in this price bracket and at least it’s sharp. Brightness is more of a concern, particularly when outside in direct sunlight. 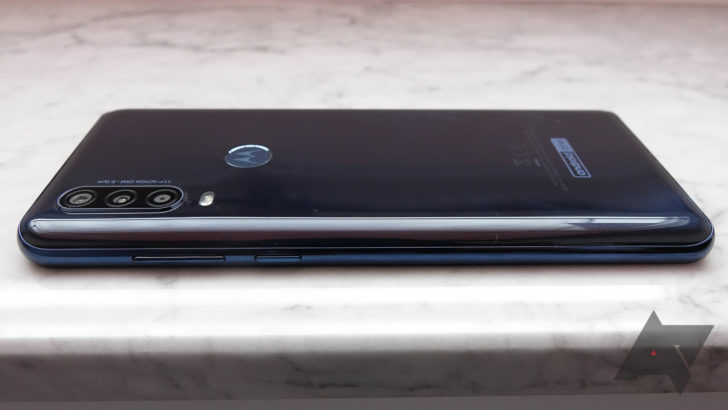 Build quality throughout is commendable, and the phone feels good in the hand, in part due to the 21:9 aspect ratio that makes it taller and thinner than most other phones on the market. This is jarring at first, but potentially preferable once you get used to the easier-to-grip frame and learn to live with the black bars either side of content not optimized for it. The power button and volume rocker are well placed on the right side, with a headphone jack up top. The bottom is where the USB-C port and single bottom-firing speaker are located. Audio is plenty loud but easy enough to cover with your finger while watching videos in landscape. 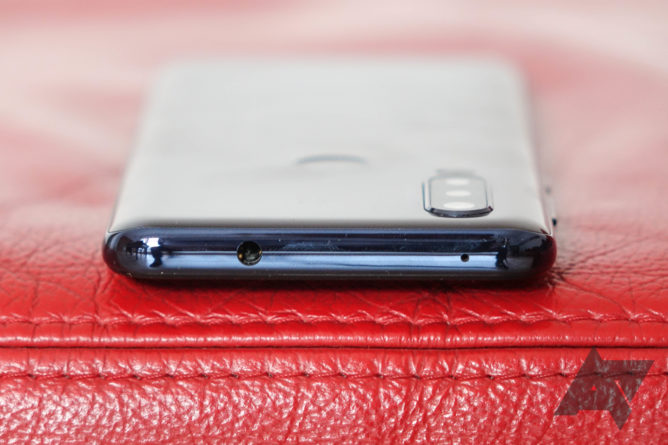 The One Action is IPX2 rated, which means you should be okay if you get caught in the rain for a brief moment but you’ll still need to be careful. That’s more than phones usually offer at this price, but it’s not unreasonable to expect even more protection from a product that’s marketed as a Go Pro-style action camera for use outdoors. In the box, you’ll find a clear TPU case, a 10W charger, and a USB-A to USB-C cable.

Since this is an Android One phone, the software experience is excellent — it's fast and smooth and without unnecessary bloat. Motorola once had a reputation for subtle but useful enhancements and some of them remain today. Moto Display allows you to hold an icon on the ambient display when a new notification comes in to briefly check its contents and I find it really useful, just as it was on the original Moto X back in the day. A newer feature also keeps the display awake when you're looking at it, which seems to work well enough. Sadly, there’s no always-on option for the display (because LCD) and I sorely miss it. Another problem with the screen is the over-aggressive auto-brightness, which is especially frustrating since the display is already pretty dim. 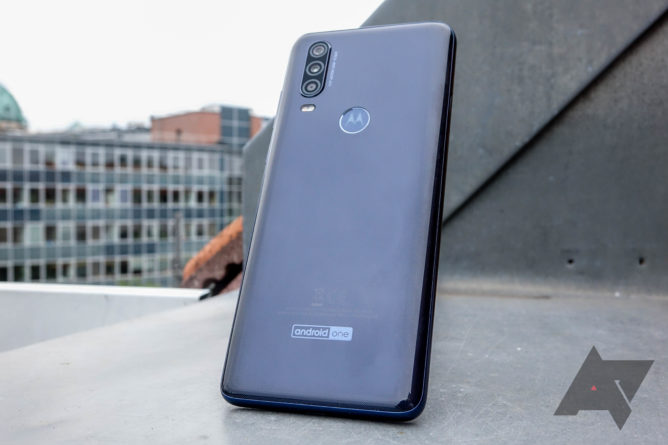 Aside from the familiar old three-button navigation and the Android 9 Pie two-button pill setup, Motorola has included its own gesture navigation system. This is essentially a bastardized conflation of gestures from Apple and other Android OEMs. There's a long iOS-style pill but you press it for home, swipe up for multitasking, swipe left for back, and swipe right to quickly switch to the last app you used. At this point it's hard to say whether or not this is good or bad since there are so many different methods floating around — it's good that Google will be making its new gesture nav compulsory in Android 10, although OEM options will still be available. OS-level navigation isn't the best candidate for experimentation and users will benefit from more consistency.

Moto Actions offers some other features such as turning on the torch with a karate chop (yeah you read that right) and a three-finger screenshot shortcut which I can't say I found too exciting, but some people might find a use for them. Aside from that, it's just plain old Android 9 Pie and that's great. It’s worth noting that this phone won’t be Android One certified in the US or Canada, which is a real shame as that will mean far fewer security updates per year and only one additional Android version that will arrive pretty late. The OS will look much the same, at least, since Moto phones aren’t heavily skinned.

Probably the biggest surprise I had using the One Action was how smooth the experience was. I usually dread testing cheaper handsets, but this one doesn't exhibit any of the performance issues I encountered with the Nokia 4.2, for example. Lenovo apparently uses Samsung's Exynos processors in these models because they offer better value for money along with the right AI capabilities compared to cheaper Qualcomm chips, and it's hard to fault that logic on this evidence. Coupled with 4GB of RAM, the SoC has no problems handling day-to-day tasks and the phone exhibits very little (if any) of the slow down or memory management problems that plague others costing even twice as much.

Battery life is something that could be improved, however. It'll get you through the day most of the time, but it's not all that consistent. There were a couple of days where it would have run out before midnight had I not been home and near a charger and that's a slight cause for concern. It must be said that I have experienced the dreaded Google Play Services battery drain issue, though. If that’s updated with a fix, it might improve the battery longevity somewhat. 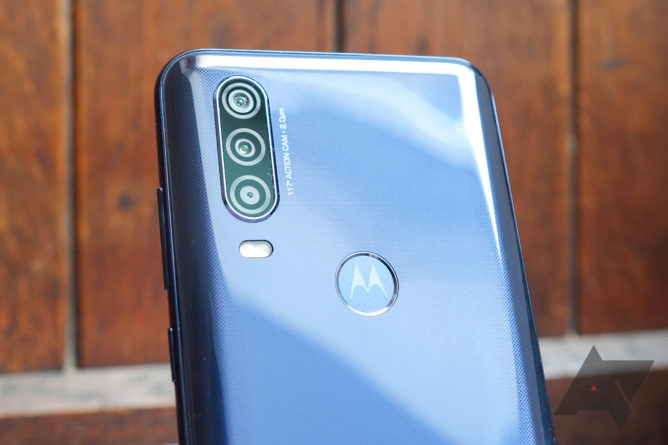 The marketing around the One Action centers around its third rear camera, an ultra-wide lens (117-degree field of view) that’s turned 90 degrees so you can shoot landscape video while holding the phone in portrait. It’s capable of shooting videos that fit the 21:9 aspect ratio of the phone’s display, and while I thought at first it was a fairly useless gimmick, it does actually prove to be pretty useful. Once you get used to shooting video this way, it could be hard to switch back to a phone that needs to be turned on its side. One negative about this is that the Action Cam only records in up to FHD, while the main camera is capable of 4K output. Both have EIS and can do 120 fps slow-motion, timelapse, and hyperlapse.

I was given a Moto-branded bike mount for testing the Action Cam, but it rather amusingly only supported mounting the phone in landscape, so I had to improvise. The electronic image stabilization works best when you hold the phone in your hand, however, although there's still plenty of room for improvement. Video quality on the Action Cam is just okay. Motorola is keen to point out that it's worked with Google to get photos and videos taken with the ultra-wide sensor displaying correctly in full screen in Google Photos on the One Action, taking full advantage of the 21:9 display, but for the best quality you're still better off using the main camera sensor for video.

Photography performance isn't that impressive, but that’s not a huge surprise for a budget phone. It’s perfectly acceptable in good lighting conditions, for example outside on a sunny day. These photos will look fine on your Instagram with good detail and color accuracy, although the dynamic range is lacking. There’s also AI scene selection which seems to know what it’s doing, although auto-focus does seem to go awry sometimes when that kicks in. Where the camera falls down is when there’s less light available, be it at night or simply just indoors. Without a dedicated night mode, these shots are often too noisy and lacking in detail. Potentially. For the price of £219 in the UK or €259 in Europe where this phone will be an Android One device, I think it’s fair to recommend this phone on the basis of how well it performs and how good the software experience is. It’s pretty rare to get so much RAM and storage at this price, and you won’t find many other phones with triple rear cameras on this budget either. If you take a lot of videos, the Action Cam is nice to have, but I wouldn’t necessarily say it’s worth buying the phone for that feature alone. Battery life is probably my biggest concern with this handset, but I think that could be improved over time with updates to the OS and the errant Google Play Services. 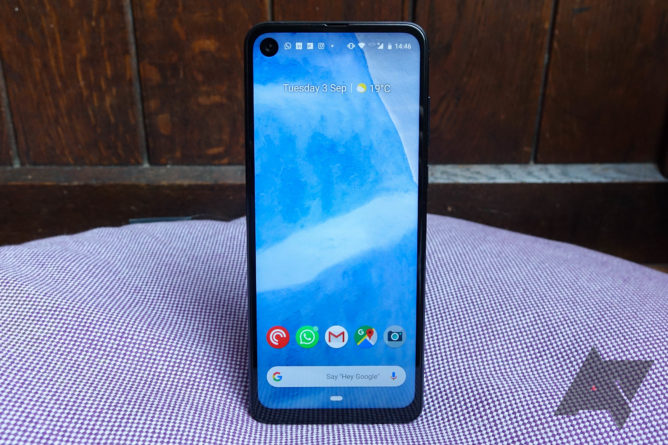 The Motorola One Action will be coming to the US and Canada in October, although it won’t be part of the Android One program and will instead run Moto’s usual almost-stock Android 9 Pie software. This also means it won’t get monthly security updates or the two guaranteed OS version bumps, so it’s harder to recommend buying the phone if you live in North America.

Android 10 allows multiple apps to access your microphone at once