Earlier today, a regional vice president for OnePlus tweeted out details regarding the hotly anticipated OnePlus TV, revealing that it will come in a 55" size (among others, most likely), and the 55" version will sport a QLED panel. Also, although we were pretty sure that the OnePlus TV would be "smart" thanks to Android TV based on prior leaks, @androidtv_rumor confirms that Google has just certified a new device named "Dosa."

Previous leaks via the Bluetooth Launch Studio (which enumerates product listings approved for use with the tech) have included model numbers that indicate that we should see up to four distinct sizes: 43", 55", 65", and 75", though only the 55" size has been explicitly confirmed by OnePlus in today's teaser. We didn't know what kind of display the television might feature, but if it's QLED, that should ease at least a few concerns when it comes to quality.

While QLED displays don't have the crazy contrast that OLED displays do, they also don't suffer from burn-in, and they still have better color and contrast compared to older, non-"Q" LCD/LED displays. QLED displays have historically supported HDR standards, get super bright, and can show wider color gamuts than older LED/LCD displays. For more details, check out this comparison of OLED and QLED by our friends at How-To Geek— it's a bit old, but it explains the differences.

We were also confident that the OnePlus TV would be running Android TV, as the same Bluetooth listings described an upcoming OnePlus Product as a "unique android TV." Today's news that a "Oneplus_Dosa_IN" device has been certified by Google would also seem to corroborate that. Previous OnePlus hardware has gone by food-related names including "bacon," "cheeseburger," "dumpling," and "enchilada." In that vein, "Dosa" would be a perfect fit for a OnePlus device meant to land in India first, as the leaked schedule and Amazon India Twitter account imply will happen with the new TV.

More specs have been uncovered by @androidtv_rumor. They showed up on the Google Play Developer Console and mention a yet-unknown Mediatek MT5670 processor and the Mali G51 GPU. The resolution is said to be 1080p, but that's only for ATV's menus. Compatible content should play in 4K.

More info on the @OnePlus TV "OnePlus_Dosa_IN" I talked about yesterday. 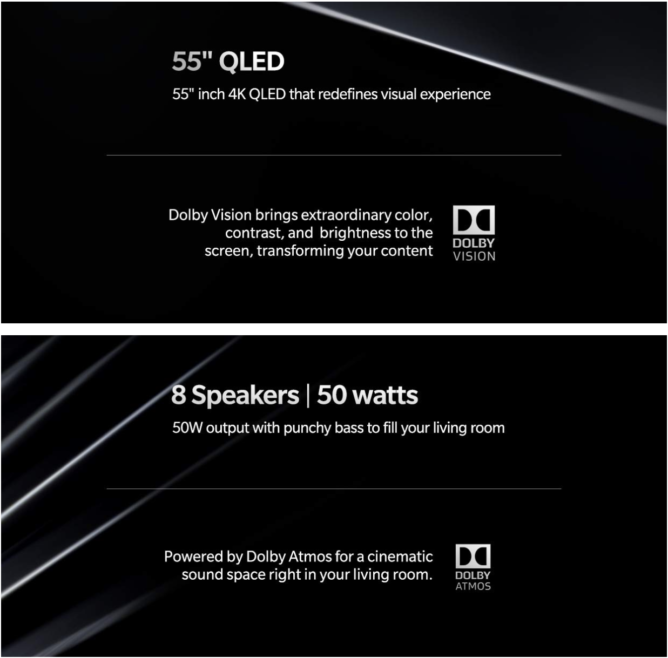 As expected, the 55" model will be QLED with a 4K resolution and support Dolby Vision for HDR playback. When it comes to audio, the TV will pack an impressive eight speakers with a combined 50W of output, compatible with Dolby Atmos.

Interested Indian parties can sign up to be notified by Amazon on the same page, presumably for product availability or additional details.

OnePlus keeps releasing little bits of information about its TV. CEO Pete Lau tweeted an image of the remote, showing off a sleek silver design, Google Assistant button, USB-C charging, volume rocker on the side, and D-pad on top. One button is mysteriously unlabeled, so we'll have to wait and see what that's for.

Besides running Android TV and being compatible with Google Assistant, the OnePlus TV will also support Amazon Alexa. Its Alexa skill was spotted by Smartprix on the Amazon store in India; it lists all the different commands you can use to power the TV on/off, mute/unmute it, change channels or inputs, and control volume.

Disney+ launches early in the Netherlands, available as a free trial until November release