Motorola has only unveiled the Moto One Zoom last week during IFA 2019 in Berlin. We were pretty impressed when we first held it in our hands – unlike many other mid-range phones from the company, this one offers quite some high-end features for $450. The Lenovo subsidiary would like to make its new product even more compelling to consumers and has thus started a limited promotion on its website, offering a $50 rebate when you purchase the phone through its online store.

The One Zoom's name says it all: Through a combination of four lenses on its back, the phone is capable of 3x optical and 10x hybrid zoom, working with focal lengths between 13 and 81mm. Its 48MP main shooter is using a quad pixel technology, allowing it to take better pictures at night. The camera module is accompanied by a glowing Moto logo, serving as a notification light. On the front, the 6.4-inch FHD+ OLED display is joined by a 25MP quad pixel wide-angle front camera. A headphone jack and 128GB of storage (expandable via MicroSD) complete the package – only the Snapdragon 675 and 4GB of RAM could leave you longing for more. 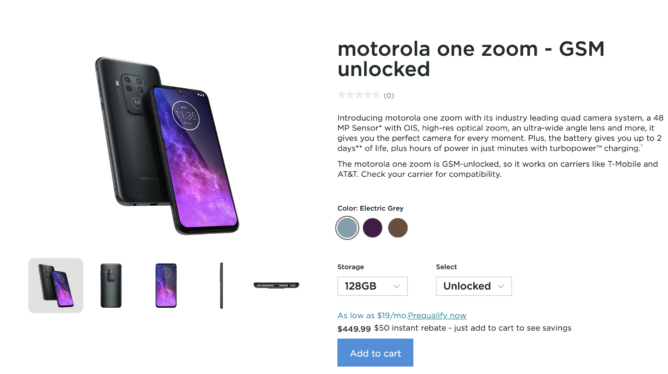 At this price, it's a more than a capable device, aggressively competing with the Pixel 3a and 3a XL. To grab the deal, head to Motorola's website and simply add the only available configuration to the cart. The $50 rebate will be applied automatically.

[Update: Live in Stable for some] You can directly send tabs to your other devices on Chrome ...