Samsung's trade-in programs are usually pretty appealing, but they're not the most reliable in terms of paying out. If you've been looking to get some decent money out of your new phone, Microsoft Stores are currently handing out up to $650 with in-person trade-ins towards the purchase of a Note10 or Note10+. 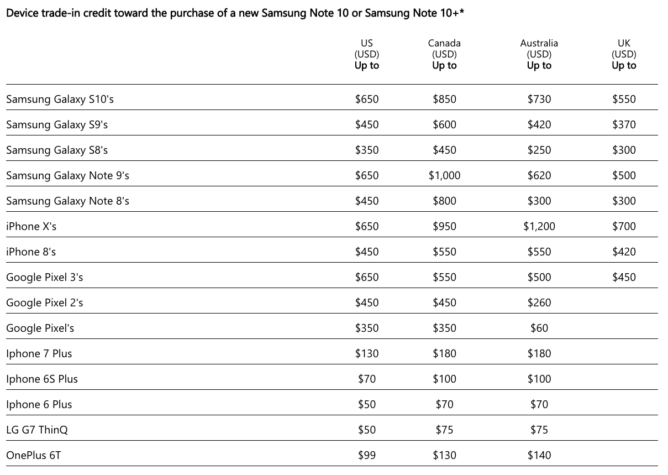 To whomever made this chart: apostrophes don't belong in plurals.

These trade-in values actually compare very favorably overall to Samsung's, which max out at $600. For instance, while Samsung will only give you $200 for a first-gen Pixel, Microsoft will give you $350. The same is true for the Galaxy S8 ($250 from Samsung versus $350 from Microsoft) and the Note9 ($350 vs $450). Plus, because the trade-in will be done in person at a Microsoft Store location, there's no concern about not receiving the agreed-upon value.

Microsoft does throw some of its apps on its versions of the Note10 and Note10+, but it's pretty minute stuff that can be ignored. As for the Canada, Australia, and UK sections, we're assuming that the "(USD)" text under each is a mistake and should actually correspond with the local currency, because it wouldn't make much sense otherwise.