Right after announcing its very own mobile operating system HarmonyOS during its developer conference, Huawei quickly followed up by showing its continued commitment to Android. The company unveiled the latest iteration of EMUI, number 10.0, based on Android Q. A beta version of it is coming to the Huawei P30 series on September 8, which further confirms what we were already expecting: Google is most likely launching the stable release of Android 10 Q at around the same date.

During its packed keynote event, Huawei didn't have much time to explain all the little changes coming with EMUI 10.0, but did mention that it will have the system-wide dark mode Google has been working on. The company also adds multi-screen support, similar to the Note10's Link to Windows feature. It allows you to access your phone's display from your computer wirelessly.

#EMUI10 is the culmination of 7 years of UX design. Multi-screen collaboration gives users a seamless experience from smartphones to PCs, combined with unrivalled design. #HDC2019 pic.twitter.com/iJqciCgIat

With the beta release of EMUI 10.0 set for September 8, Huawei proves to be one of the few Android manufacturers to push fast updates to their devices. The fact that EMUI is one of the most heavily customized OEM versions of Android makes this feat even more impressive. The company is also preparing a Play Services competitor named "HMS Core,” which provides apps with alternate APIs. By including its own core services, Huawei might be able to easily transfer Android apps to its own OS should its access to US products be revoked again.

Other than the P30 series, the following devices are slated to receive the update over the next couple of months:

XDA Developers obtained a timeline from My Drivers detailing when which devices will receive EMUI 10.0. The Mate 20, 20 Pro, 20 X, and 20 RS Porsche Design are slated to receive the software in the form of a beta by the end of September 2019. Huawei's subsidiary devices Honor 20, 20 Pro, View20 and Magic 2 will receive the beta in September as well, albeit branded as Magic UI 3.0. 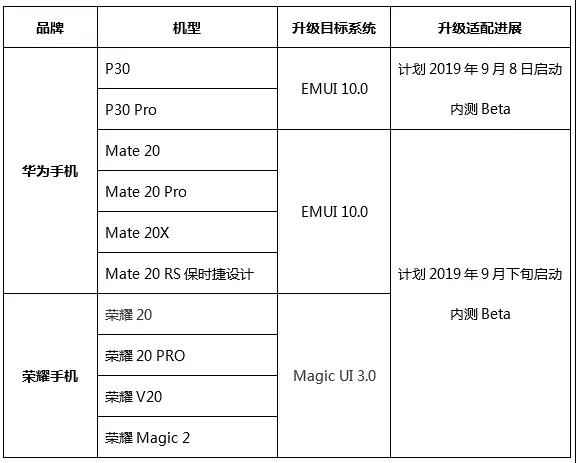 Huawei shared a more detailed timeline during IFA 2019 in Berlin. The P30 and P30 Pro are the first to receive Android 10 starting in November, which isn't surprising considering Huawei just showcased two new color versions featuring the latest software. Next up, the Mate 20 and its siblings 20 Pro, 20 RS, 20X (4G) as well as the Honor devices 20, View 20, and 20 Pro are supposed to get EMUI10 in December, while the Huawei P30 lite, the P20 series, and the Mate 10 series should be updated by March 2020. Other models will obtain the new software in the second quarter of 2020. 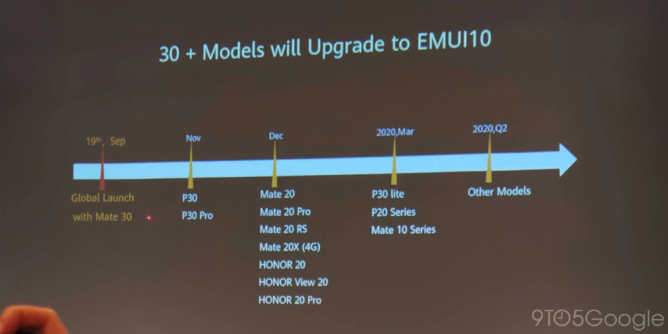 Interestingly, the timeline also details the global release of the Mate 30 on September 19. While the flagship is supposedly coming with Android, it's rumored to be forced to launch without Google apps and services because of the trade disagreements between the US and China.

Update: We've just learned that this is, in fact, the beta timeline. Owners of the devices in the timeline above can apply for pre-release software starting with the corresponding dates. There is no word on stable releases yet.

That EMUI 10 release timeline story doing the rounds - missing a key tiny bit of fine print. Easy to miss, but it’s the schedule for the beta rollout. Not full release. pic.twitter.com/AGb5FZxeva