IFA is all about consumer electronics, so of course, the trade show also features the release of new Wear OS hardware. In particular, Fossil sub-brands Puma, Michael Kors, Armani, and Diesel will be offering new wearables in the coming weeks. Other than the welcome addition of the Snapdragon Wear 3100, you won't find revolutionary technology in them, but if you enjoy smartwatches as fashion accessories and basic fitness trackers, you could find a device to your liking among them. Puma is the latest company to sign a contract with Fossil and unveiled its fitness-oriented Gen 4 smartwatch coming in black, yellow, and white. The silicon-clad devices weigh just shy of 30g and find inspiration in fitness bands. All three have a 44mm display, a crown, and water-resistance, allowing you to submerge them up to 50m. A GPS tracker and an integrated NFC chip for payments make it easier to leave your phone at home while working out, though the 4GB of storage and 512MB of RAM might leave you longing for more. The watches will be available on Puma's website starting in November 2019 and will set you back $275. The MKGO watch in red.

Michael Kors has added three new wearables to its fashion line-up: the MKGO, the Lexington 2, and the Bradshaw 2. While the former two are available for purchase already, the latter is slated for release on October 1. The MKGO comes in white and gold, red, black, and pink, featuring silicone bands and a 43mm case. It's sold for $295. The Lexington 2 looks more like a piece of jewelry, which is also reflected in its prices ranging from $350 to $425. The 41mm case comes with bands in a variety of gold, silver, and bronze tones. Meanwhile, even though the Bradshaw 2 isn't available in the US yet, Michael Kors' German website lists it for prices ranging between €370 and €420 (~$410 and ~$460). It further confirms the watch as the biggest of the three, coming in at 44mm. Just like the other two devices, it has an AMOLED screen. The Lexington 2 in pavé and gold-tone glory.

Meet the next evolution of Emporio Armani Smartwatches, the Smartwatch 3, powered with #WearOSbyGoogle. Featuring a built in speaker, more storage and extended battery mode. pic.twitter.com/nvked5J78H

Emporio Armani's Smartwatch 3 looks like a masculine fitness tracker and has an interestingly designed strap connection for its silicone bands. Just like the Puma devices, it comes with waterproofing and GPS tracking, making it a stylish consideration for people looking into basic fitness tracking. Thus far, Armani hasn't announced a price for its watch, but it says the watch is coming with 1GB of RAM and 8GB of internal storage. 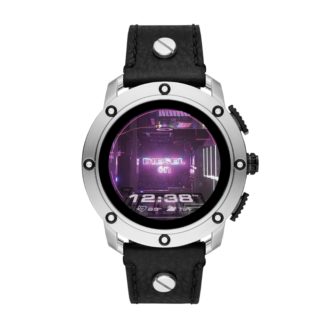 The Diesel On Axiom features the most industrial look of the bunch, coming with decorative rivets around its watch face. Like the others, it has a number of straps and body colors to choose from. The device is coming in October and will go for $350, and just like the Armani watch, it has 1GB of RAM and 8GB of storage.

All Fossil smartwatches introduced at IFA run on Snapdragon Wear 3100 processors, which should add significant improvements to battery life over wearables featuring Qualcomm's older processing platform. Fossil also added its own battery-saving modes to the new devices, allowing them to last more than a couple of days on a single charge – presuming you're okay with reduced functionality.

[Update: Back in stable] Spotify kills the widget in its Android app, but you can vote to bring ...

Xiaomi delivers a shut-off toggle for MIUI ads in beta