There's a lot to like about Asus's Chromebook Flip C434. It's got great build quality, slim bezels, and good performance under most conditions. Right now, there's something else to like, too: it's more than $70 off from Amazon.

At its MSRP of $569, the C434 is highly recommendable to anyone in the market for a Chromebook, but nudging it down under that $500 mark makes it all the more appetizing. Your $499 will get you an aluminum build, a Core m3 processor, and four gigs of RAM — if you want eight gigs, that's another $60. You can read Corbin's full review for more information. 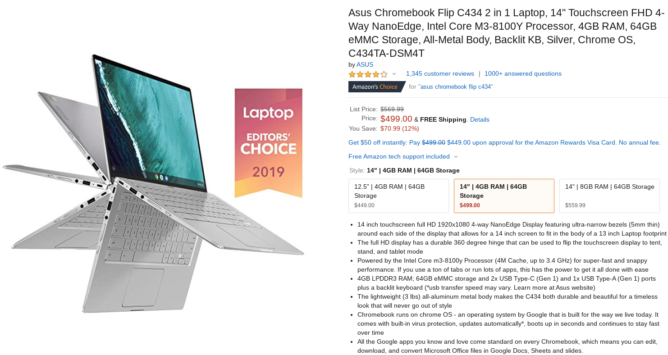 If you're averse to Amazon, you can also pick one up at Office Depot — it'll just run you an extra 99 cents. This deal isn't explicitly limited-time, but several sellers who were running it have since stopped, so if you're on the hunt for a midrange Chromebook, now's probably the time to bite.