The name "Huami" may not be familiar to most of you, but you'll definitely recognize one of its products: the Mi Band. The company has partnered with Xiaomi on wearables for several years and its Amazfit lineup is to smartwatches what the Mi Band is to activity trackers: very affordable, powerful, excellent for the money. At IFA, Huami announced two new models that'll be joining its collection, the Amazfit GTS and Stratos 3.

You'd be forgiven if you thought this was an Apple Watch at a glance — the GTS looks eerily familiar to anyone who has ever seen Cuppertino's wearable. However, this one can last up to 14 days on a charge or 25 hours if GPS is constantly enabled, numbers neither Apple nor Garmin nor Fitbit can get anywhere near. The GTS pulls all the stops to impress too: metal body with 9.4mm thickness, 2.5D curved glass, 1.65" 341PPI AMOLED display, 5 ATM water resistance, 6-axis acceleration sensor, and built-in GPS. It also has an always-on heart rate sensor that monitors your cardiac health and alerts you of abnormal values, 12 sports modes (including swimming and skiing), and customizable quick access widgets to get to your most used features.

It's compatible with both Android and iOS and comes in six colors: beige, black, blue, grey, pink, and red. International pricing hasn't been announced, but it costs 899 yuan in China (approx. $126) so you should expect a very affordable price once it hits our markets.

The Stratos 3 falls in line with Amazfit's previous sports-centric watches. It has a round design with a 1.34" transflective display for better outdoor readability, a breathable silicon strap, and four physical buttons. You'll also get 5 ATM water resistance, a built-in GPS, and a continuous heart rate monitor. When used with Huami's own software and set to an "Ultra Endurance Mode," the Stratos 3 can last up to 14 days (35 to 70 hours in GPS mode) while still letting you monitor your heart rate, get notifications, and track your activity across 11 different sports (including swimming).

Again, international pricing and availability weren't announced, but in China, the Stratos 3 costs 1299 yuan (approx. $182) so you should expect a slightly higher but similar price.

Finally, Huami teased a concept product that won't be released until 2020. The Amazfit X is supposed to have a bracelet-like form factor with a 2.07" curved screen, curved battery, and 3-section motherboard curved to fit the watch's body. The display is said to be beautiful too thanks to a 326 PPI resolution and 430 nits of brightness. No other details have been revealed, but the render sure looks interesting. 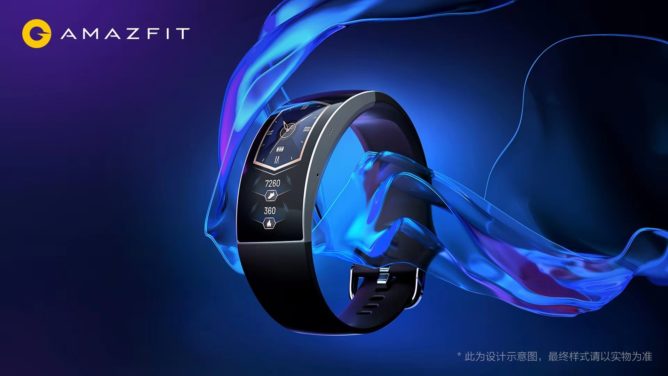 [Update: Manual setting] Google Drive dark mode is showing up for some users