I don't mean to be down on LG. And while it's in nowhere near the dire straits Sony or HTC are, I don't think anyone would disagree that it's high time for the company to make some radical changes to its high-end smartphone strategy. And its newest phone, the G8X with DualScreen, is arguably quite a radical device. I just don't think it's the sort of "radical" any of us had in mind. 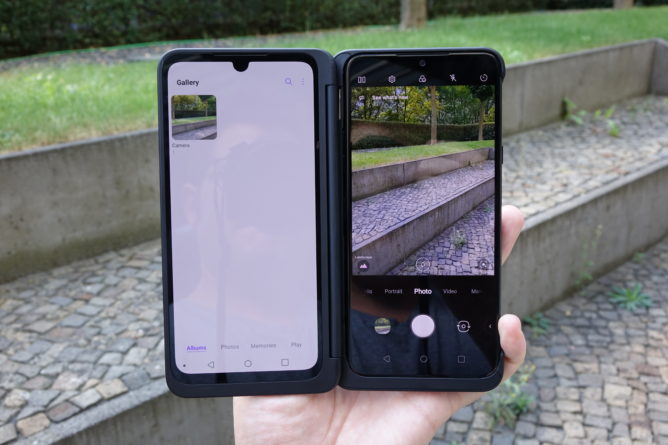 The G8X is, in many ways, a moderately improved version of the G8S, which was itself a moderately improved version of the G8. The G8X does away with the G8 and 8S's front-facing Time of Flight gesture sensor and secure face unlock (sadly), but gains a larger 6.4" OLED display. It also loses the 8S's telephoto camera, perplexingly, but receives a new, much larger 32MP selfie camera binned to 8MP for maximum light-gathering performance. You've got the same Snapdragon 855, 6GB of RAM, an upgrade to 128GB of storage standard, plus a substantially beefed-up 4000mAh battery. There's now an in-screen fingerprint scanner (it's optical), and LG even kept the headphone jack and discrete Quad DAC for you audiophile geeks out there. Most other notable checkboxes remain intact; namely, wireless charging, a microSD slot, and IP68 water resistance. 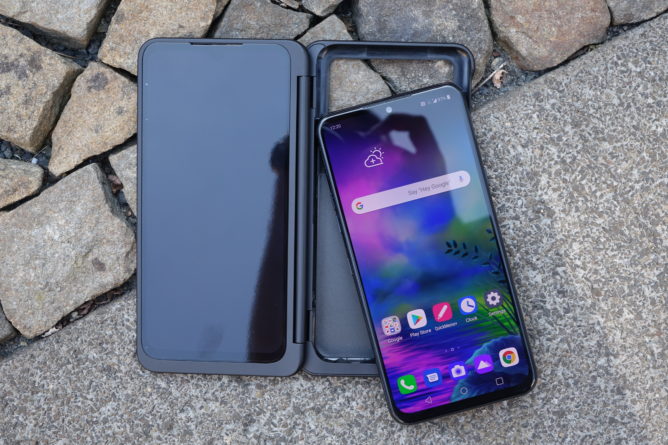 All this makes the G8X sound like a mostly-better, slightly bigger version of the phone which preceded it... because it is. And while we don't know just how much it will cost, I expect it won't be terribly much more expensive (for the phone on its own), either, given the reduced bill of materials on the front-facing sensor array and loss of the telephoto camera. It all sounds fine. But you know where we're headed with this post, and it's right down Weird LG Stuff Lane. So, let's do it.

LG introduced its first DualScreen "accessory" with the V50 ThinQ earlier this year, and I've not seen anyone who's had a real chance to use it that has much great to say about it. With the new version designed specifically for the G8X, there are real, material improvements. For one, the display panel of the accessory case and the phone itself should be much more closely color and temperature tone-matched (they're also the same size and shape). LG says the 360-degree folding mechanism should feel a lot tighter and more progressive, for more fine-tuned control. The whole assembly is thinner and lighter. There's a tertiary 2.1" display (non-touch) for a clock and basic notifications on the outer cover glass. All of these things are good! Iteration, improvement, learning! Sadly, most of that sort of goes out the window when you start using the thing, because most of the V50 DualScreen's real problems remain unresolved. 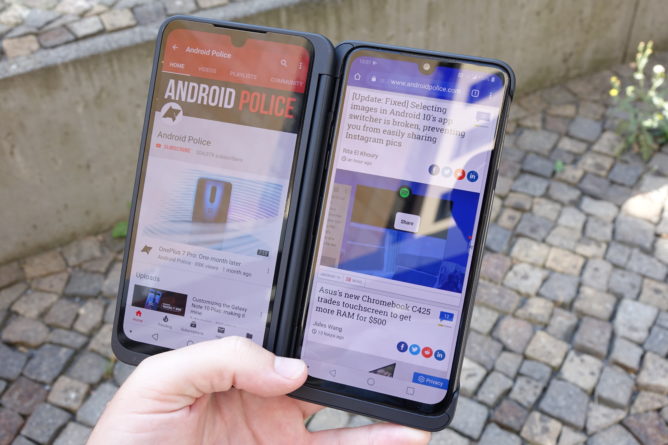 Not only does the DualScreen have a wide gape between the two panels, the secondary screen (left) sits well above the primary.

For starters, the G8X with its DualScreen accessory in the 180-degree "flat" position has a positively comical amount of space between the screens, such that continuous display of content isn't something LG makes an option. This makes it even worse, in one sense, than ZTE's disastrous Axon M — a phone that launched nearly two years ago. The screens aren't even flush; the secondary panel sits around half a centimeter higher than the primary one on the phone when laid flat, by design. This does not look good. The phone's rear cameras are blocked unless you have the DualScreen attachment unfolded, unlike the Galaxy Fold, which is designed such that they're available from either the small front display or the larger folding one. The G8X is also much heavier than Samsung's foldable (if half a millimeter thinner), weighing in at a staggering 326 grams to the Fold's already portly 263. 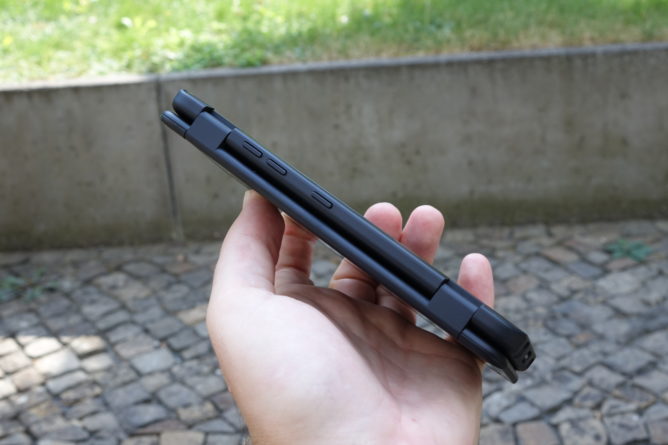 Fully encased, the G8X is a chonkster.

Using the DualScreen attachment as a sort of new age Sidekick for rapid fire texting is also hardly the seamless experience one would hope for. Because the secondary screen has no internal gyroscope, you have to awkwardly make sure the phone itself detects you want landscape orientation in order to activate the button that lets you put the keyboard full-screen on the primary display. (And no, you can't just flip and reverse the roles, because the half with the phone is far heavier and will just flop around on the hinge.) I realize this doesn't sound like a big deal as I explain it, but in practice, it would make what is arguably one of the DualScreen system's greatest advantages a significant pain in the rear to actually use. Not to mention, it only works with LG's built-in keyboard app, a very significant limitation when apps like GBoard and Swiftkey command massive user bases. (As an aside, I have also yet to see a single app on Android that isn't a video player or a game which is remotely usable on an ultra-wide aspect phone screen in landscape orientation — there's just no damn room for anything). 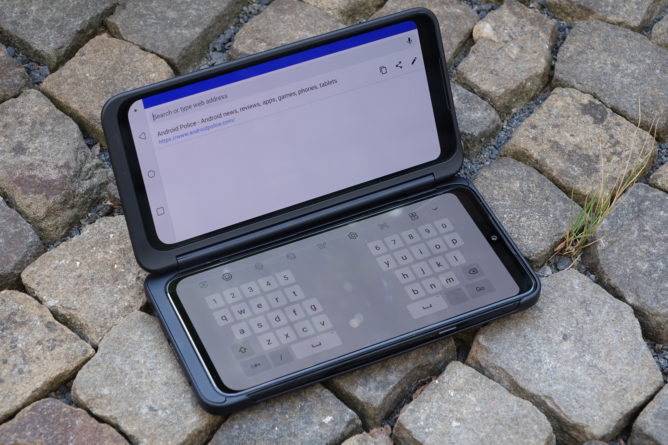 Hopes that the G8X will be a modern day Sidekick are probably not ones you should hold onto.

All that said, there is a legitimate gaming angle to the G8X: you can design and customize your own virtual gamepads for dual-screen gaming. LG says it's working with game developers like Epic and PUBG to add bespoke support for this in their titles, and that's cool. I'm sure somebody out there will look at the G8X and its funky DualScreen gadget and think "this is just the mobile gaming gadget I've been waiting for." That person probably exists. And for them, maybe the G8X and its off-beat DualScreen gizmo will be a battle royale breath of fresh air.

But for the rest of us? Those hoping that the world of foldables will bring some new level of form and function to the stale smartphone rectangle? Yeah, I don't think you'll be finding it here. 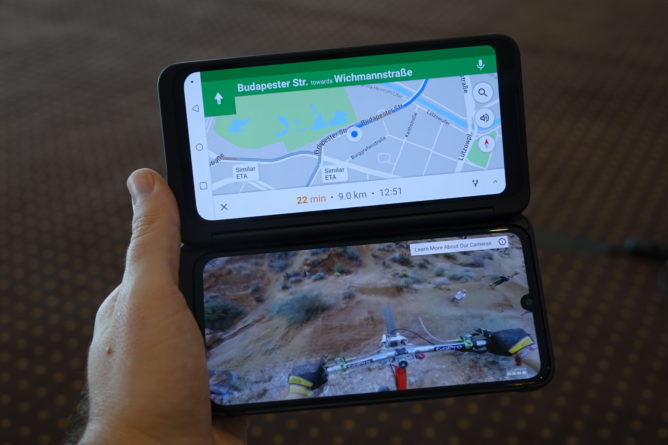 With the G8X, you can engage in some, uh, less than advisable multitasking.

But how about as just a smartphone — does the G8X have more to offer without its DualScreen appendage? Standing on its own two glass slabs, G8X looks like a reasonably competent, reasonably modern high-end smartphone. But it doesn't feel special. I'd have to spend more time with it to have a real verdict, but it's hard to see a way in which the G8X stands out in an increasingly cutthroat space. Headphone jack warriors talk a big game on the internet, but they simply don't represent the vast majority of consumers — it's nice of LG to keep the 3.5mm around, but there's a reason no one else is.

At the right price, perhaps LG might have something here, but there's no reason to expect the G8X will be a stellar value (because no LG phone in recent memory has been). Still, maybe LG will surprise us: it hasn't officially announced a release date or pricing for the G8X for the United States yet, but expects carriers to release these details in the coming weeks. Here's to hoping. 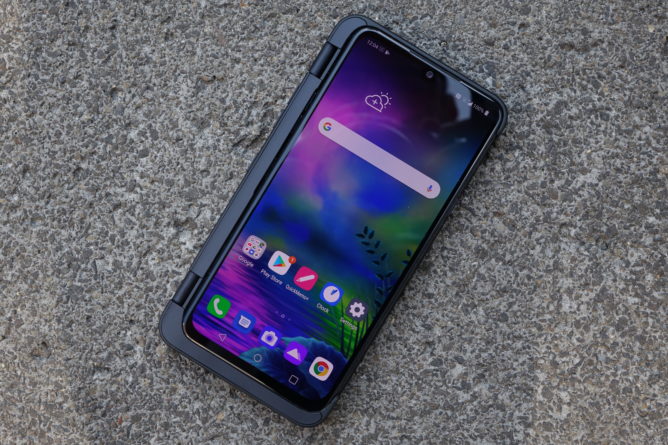 Telegram v5.11 lets you schedule messages, prevent others from finding you by phone number