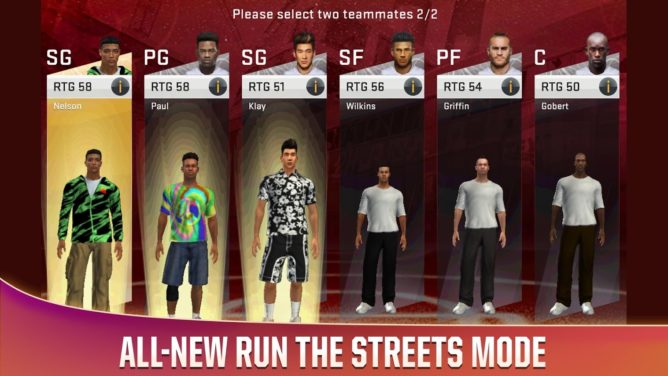 Since the NBA 2K series offers a yearly release, you may be wondering exactly what's changed since NBA2K19. As you can see in the picture above, there's an all-new street mode where you can take your MyPlayer around the world in a series of 3-on-3 streetball competitions, and you can even compete against other players for placement on the Leaderboard.

Of course, the new street mode isn't the only significant addition to NBA 2K20, as controller support has finally made its way to this year's mobile version. While you can't navigate the game's menus with a controller, you can jump into a match and use one. This clearly adds an entirely new level of control to the game that's on par with consoles and PC, though if you're a fan of touch controls, you'll be happy to know that they have been optimized.

It's also clear that NBA Stories makes a reappearance, and there's also a new MyCareer Story where you'll start in college to eventually rise through the ranks of the NBA. If neither of these modes floats your boat, you may be more inclined to play through The Association, which is a general manager mode that allows you to scout and draft the incoming rookie class while managing the team's budget.

Much like every other NBA 2K release, multiplayer for 5-on-5 matches is supported, and a new soundtrack will accompany you on your journey through the NBA that features songs from artists like Drake, Diplo, and T-Pain.

As expected, NBA 2K20 is a paid release that will cost you $5.99 upfront, but this does not mean there aren't any in-app purchases included. This is a 2K release after all, so expect IAPs that range up to $49.99 per item. These purchases are mainly used for acquiring in-game currency.

So there you have it. NBA 2K20 is officially available on the Play Store as of this morning, and it brings along a few new additions such as a street mode and controller support. While I'm rarely excited by the latest yearly sports release, I'm sure there are more than enough NBA fans out there that eager to jump in and start their career. There's assuredly enough content here to keep people busy for a good while, but of course, I'm not a fan of how 2K monetizes its games, so make sure to watch out for aggressive monetization. If you're eager to take a look, the game will run you $5.99, and you can purchase it today by clicking on the Play Store widget below. Sony Xperia 5 skips a bunch of numbers, but it's basically just an Xperia 1 compact