Dark modes are quite popular these days, both thanks to their eye-pleasing appearance but mostly because they help reduce battery usage on AMOLED displays. Therefore, to delight users and remain competitive on the market, many companies are working on developing a darker theme for their apps. Microsoft is one of them, as it announced it was designing one for OneNote back in April and is now doing the very same with its mobile email client.

Back in 2018, the firm confirmed Outlook would receive a dark mode on iOS and Android, without specifying when. Almost a year later, it seems we're just about to get one, as Windows Central has received was it says are official renders picturing the app's dark theme running on Android. The screenshots show the mode is extended to the mail, calendar, and search screens, while blue accents are retained throughout the UI. 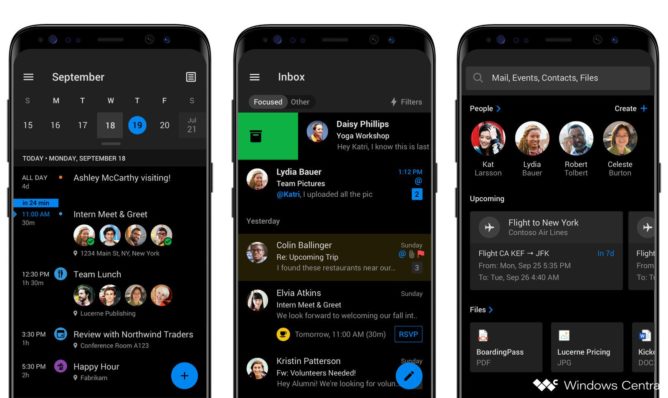 According to the site, the new theme can be turned on via the hamburger menu, or the Theme section in the app's settings. There's also an option to link it to Android's battery saving mode and automatically switch between bright and dark modes, based on the one used throughout the system.

It's only natural for Outlook mobile to get a dark mode, as both desktop and web clients already feature one. The theme preferences could also sync across platforms, if Microsoft follows the same approach it used when developing OneNote's dark mode. Unfortunately, the company hasn't officially confirmed the latter and has yet to announce an official availability date. We'll keep you posted when we learn more about the feature's release date, which will most probably be available for Insiders first.

As part of its Office interface redesign, Microsoft has officialized a new dark mode for its messaging app. The latter is available starting today and can be automatically turned on if you're using a system-wide night theme on your phone. A matching mode is also featured on Office.com to ensure continuity across devices.

Microsoft mentions it will extend the dark mode's rollout to Excel, PowerPoint, SharePoint, OneDrive, Planner, and To-Do on mobile.

Some of our tipsters have confirmed receiving the new theme in version 3.0.137, dated from August 27. This leads us to believe dark mode is activated through a server-side switch rather than an app update. If you still don't have it, you could try clearing the app's cache in Settings -> Apps -> Outlook -> Storage -> Clear cache. If it doesn't work for you, here's a screenshot of what's about to come. 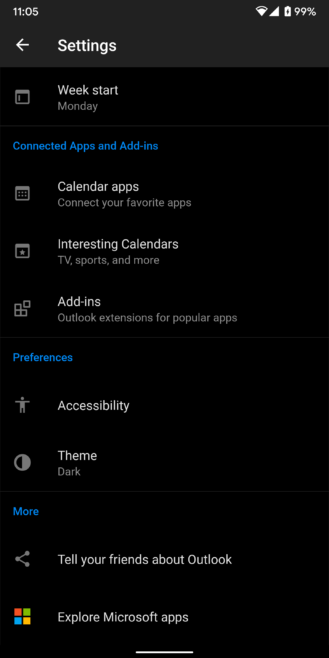