Lenovo was one of the first companies to cooperate with Google on an Assistant Smart Display. It launched the unoriginally-named but much-loved Lenovo Smart Display in both 8" and 10" variants last year and essentially won the product category over its competitors. Both the JBL Link View and LG ThinQ View failed to impress us as much as it did, and even Google's Nest Hub wasn't a proper replacement due to its lack of a camera for video calls.

Now Lenovo is building on that success with a smaller 7" Smart Display, which seems like a perfect competitor to the Nest Hub because yes, it does have a camera.

The Lenovo Smart Display 7 is compact. The speaker is placed below the display for a minimal footprint. That makes it perfect for limited surface areas, like bedside tables, desks, busy kitchen counters, or hallway shelves. Its exact dimensions are 155mm in width, 176mm in height, and 83mm in depth. Comparatively, the older 8" Smart Display measured 263 x 142 x 12-111 mm and Google's Nest Hub was 178 x 118 x 67 mm. 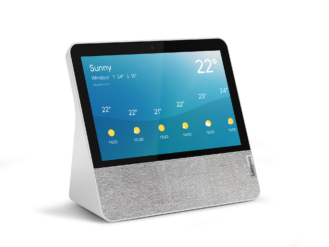 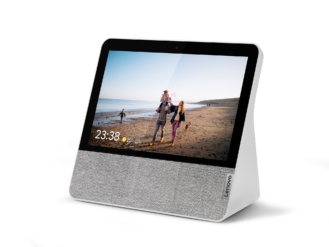 As a side effect of this design change, it seems you can't flip the unit to portrait mode like you could with last year's models. That's one of my favorite features when making video calls on the 8", since I can get see my parents and in-laws on the entire display instead of them being crushed to fit the landscape orientation with black bars on either side.

Other specs include a 7" IPS touch display with 1024 x 600 resolution, two 1.5" 5W stereo speakers with a passive radiator, and a dual microphone array.

Notably, compared to the 8" model from last year, the processor has changed from the 1.8GHz Qualcomm Home Hub Platform to the 1.5GHz MediaTek 8167S, Bluetooth has been upgraded to 5.0 instead of 4.2, but the camera resolution has been lowered from 5MP to 2MP. 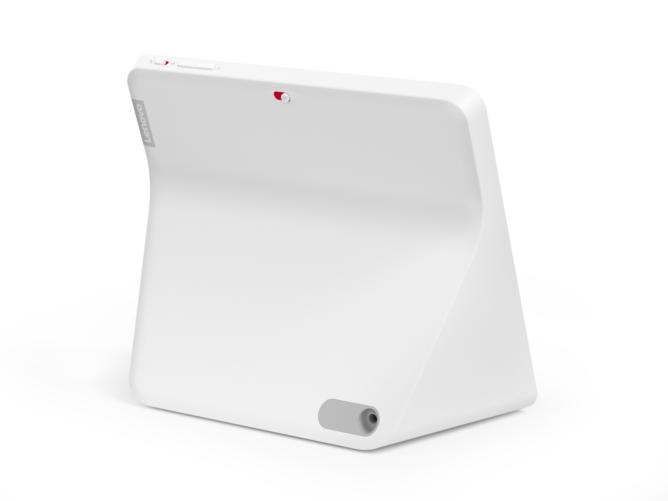 It also has a physical microphone mute switch and camera shutter.

Lenovo also says the Smart Display 7 has an RGB sensor, but it's not clear what that's for. It could mean a proximity detector or it could be an ambient light sensor like the Nest Hub, used for adjusting the display's color and brightness to fit with its surroundings.

Like all Smart Displays, this one has the Google Assistant and can be used to ask questions, play music and videos, check your Google Photos and set them as an ambient photo album, control your smart home, and video call people on Duo.

The Lenovo Smart Display 7 will only come in white and will be available in October of 2019 for $130.