We've covered some impressive batteries here at Android Police, but most folks probably aren't shopping around for a 100W of output or lunchbox-sized chargers. Overkill like that isn't necessary to top up a phone, laptop, or even your Nintendo Switch on the go, and Jackery's Supercharge 26800 PD bundle provides both a portable and a wall charger that each spit 45W over USB-C and work as advertised without any hiccups or odd behavior — a minor miracle these days. The only real downside is the $120 asking price, but with our coupon, it's a bit more palatable.

We're experimenting with trimming down the length of these accessory reviews, so the sections that follow should be a little shorter than you may be used to. Jackery's SuperCharge 26800 PD is a long, thin, aluminum shell with rounded edges. All the ports live on a single side, together with a yellow display that shows the remaining charge, and a button that triggers it. You also have to push the button to enable the output ports once plugging something in, which I find a little annoying.

The bundled 45W charger is square and roughly the size of Google's 45W charger. It has a single USB Type-C output and folding prongs for easy storage. 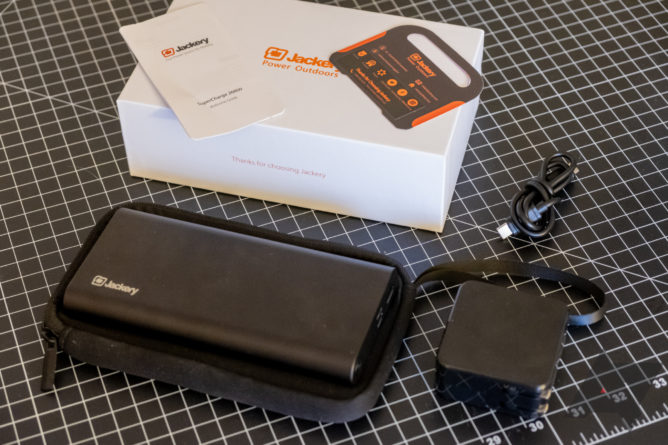 In addition to the battery and charger, you get a roughly 2-foot long Type-C cable, a padded case for the battery, and the usual warranty and information cards.

The battery met all of its rated outputs over USB Type-C without any issues, which is good. Manually pushing it past its maximum rated output saw it fail gracefully, and it was able to sustain loads around 20% above its rated output without much issue. Voltage was constant in tests over Type-C, with low ripple.

In testing the USB Type-A port for over-current protections, voltage dropped precipitously past the rated 3 amps of output, though it didn't actually fail/cut power until 3.5A (with voltage reaching 2V) as over-current protections finally kicked in. None of that should be a problem, the protections did kick in and you shouldn't be pulling that level of power over USB Type-A anyway, but I would prefer to see the battery just kill output before the voltage gets that low. We also saw a wider range of usable capacity measurements than expected in testing, from ~83 to 61Wh depending on amperage over USB-A. That range covers lower than we like to see.

Most importantly, the battery passes the Pixelbook test. It successfully charges the pickiest device we have on-hand for testing, and doesn't even require any weird power selection menus to make it work. It also happily provided power at its maximum 45W output to a 2017 13" Macbook Pro, and otherwise worked with every phone and device tested. Do note, it doesn't support PPS for the new Note10, though, just USB PD.

The wall charger the battery comes with doesn't get too hot, doesn't drop in voltage at max output, and meets all its advertised specs, with near-constant voltage and almost no ripple. The wall charger also happily spat power to all devices including the Pixelbook without any weird or unexpected behavior. Can't get much better than that.

Yes. As a bundle for both a PD-compliant portable charger and wall charger, the Jackery Supercharge 26800 PD is a no-brainer. I'd prefer if it came with a longer Type-C cable, and we saw inconsistent measurements in usable capacity over USB-A, but everything else meets or exceeds my expectations. You aren't getting crazy-high output or an AC outlet, and I wish it had two USB Type-C ports, but it's a great performer. 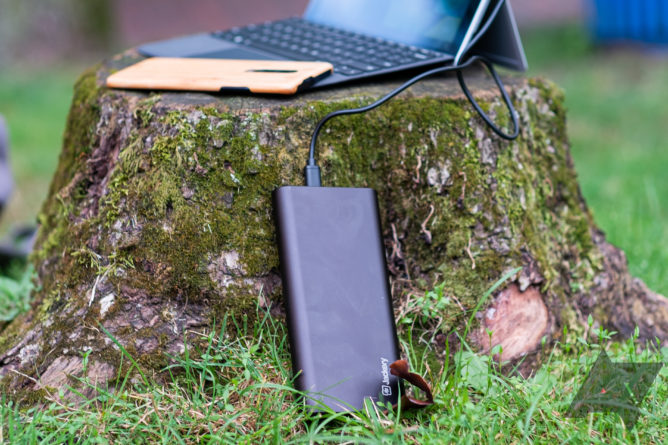 My only real concern is price: at $120, you can buy a standalone battery and wall charger for less, though individual performance may vary. If you only need 45W of output from both your power bank and a charger, and price is a bit flexible, the Jackery Supercharge bundle is the way to go.

Really, there's nothing terribly special about the Jackery Supercharge other than the fact that it meets the fairly pedestrian advertised specs without any strange behavior, but that in itself is unique compared to many portable chargers we've reviewed. It won't wow you with 100W of output, a ton of configuration options, or a fancy screen, but it would be one of my first choices if you needed both an airline-safe capacity Type-C battery and a wall charger — assuming your hardware doesn't require more than 45W, or your workflow lets you wait longer on a charge.

There are cheaper portable chargers out there, especially if you're willing to settle for less output, but the quality and compatibility of the Jackery Supercharge 26800 PD make it a winner in our book. If the price were just a bit cheaper, we'd be happy to give it our Most Wanted award, but at the current $120 list price, it's just expensive enough that it doesn't get that blanket recommendation. 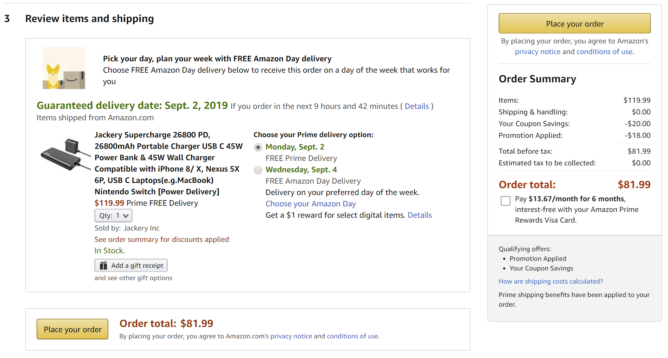 However, Jackery did send us a 15% off coupon (enter KDD2FXVR at checkout on Amazon) which stacks with the current price cut and in-page coupon on Amazon, bringing the total price down to just $82. At that reduced cost, it's a definite bargain and I easily recommend it.