Sharing on Android has seen its ups and downs. Once one of the most powerful features of the platform, it became sluggish, inconsistent, and riddled with issues. Android Q was supposed to fix the speed problem, and even if it did (which I honestly can't tell anymore), it implemented a few other unwanted changes. Pinning apps on top is no longer possible, which means you're at the mercy of the algorithm for your direct share targets. And when the algorithm messes up, it messes up badly. One case I ran across lately is Messages taking over all eight direct share spots and not letting go of them, under any circumstance. I fumed and fumed over it, until I found a (rather simple) solution.

I've used Messages about three or four times total, over two years, to send SMS. The rest of the time, the app only serves to let me read incoming messages from my bank, pharmacists' union, and of course, lots of ads and spam. When I'm sharing something from any app on my phone, odds that I'm ever going to send it to Messages are extremely close to null. Instead, I often share to WhatsApp, Pushbullet, and Slack, plus a few other apps in special instances. For years now, these are the direct share targets I've been seeing.

Yet, one day, my finger tapped on Messages by mistake in the share sheet. I backed out and didn't think anything of it until I noticed things changed. Messages hijacked the eight spots and didn't let go. For months, no matter how many times I tapped on WhatsApp, Slack, Pushbullet, and picked a target there, Android was hellbent on offering me Messages and nothing but Messages in the top eight spots. 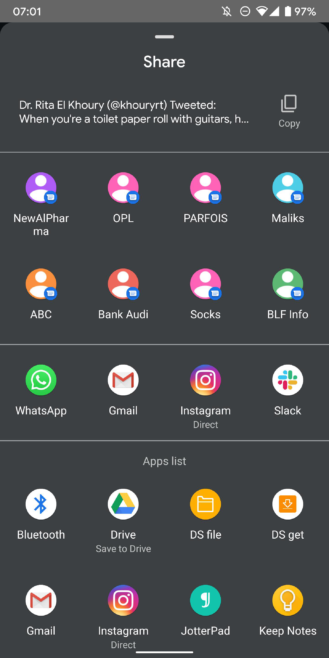 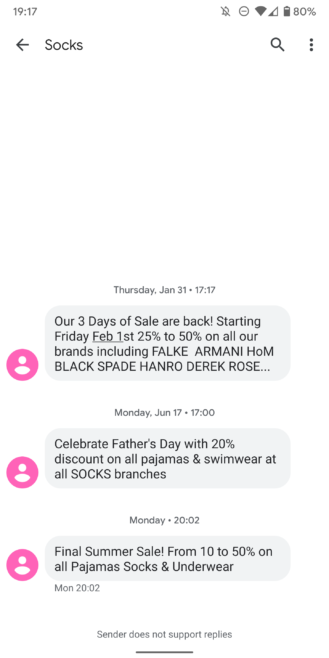 Left: Messages hijacking all eight direct share targets. Right: I can't even send messages in those!

Making matters even more ridiculous, all those targets it's offering up aren't people. They're not in my Contacts. They're not even numbers. All of them are businesses that I can't reply to, the threads are closed in Messages with the notice "Sender does not support replies." So I can't share anything to them because I literally can not share anything to them. But there they were, taking the eight direct targets hostage. Sense? None.

After months of frustration, I decided to vent about the issue yesterday on Twitter, and a light bulb went off immediately in my head. Messages is causing this; Messages can be stopped. I tried a combination of tricks us Android folks are familiar with, but turns out the one thing you need is to simply clear the app's data. I feel silly about this, really, because I know the app is the one serving those targets to the share menu. I should've thought about it earlier and not endured the annoyance for months, but here we are. My foolishness is your benefit.

Once it's done, the slate is wiped clean for Messages' influence on the share menu (you don't lose your SMS, don't worry). The first thing I saw when I went to share a tweet were eight direct targets divided between Pushbullet and WhatsApp. Whew, back to normal. (In the case of the share menu, normal = how things were, not good, but ok.) 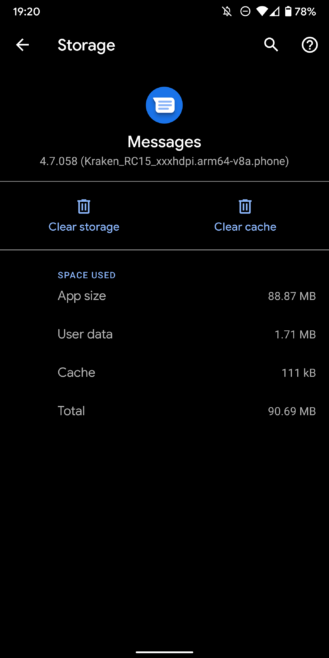 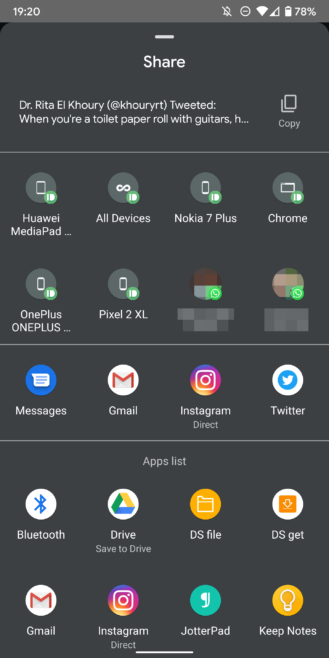 Left: Clear that storage! Right: And things go back to how they were.

One symptom of many failings

I know I'm not alone in this. Over the past years here on Android Police, I've seen comment after comment from users complaining about share targets from Messages showing up even though they never share to it or talk to those persons/businesses. I wouldn't have known how strong of a hold the app has on the share menu had I not experienced it myself. It's simply baffling. This went on for months even though I never, ever, shared to Messages beyond that one mistaken tap. WhatsApp and Pushbullet weren't able to claim back one single target even though I kept sharing to them repeatedly, many times a day.

After I discovered the fix, I tried to trigger it again. Twice I chose Messages when sharing then backed out, and that's all it took for it to hijack the menu again. I cleared the app's storage and tried once more. This time it took four or five tries but it still happened. This can't and shouldn't be. It seems like Messages is hardcoded to take over your direct targets after you share to it a few times — at least that's the case on stock Android Q.

Messages shouldn't do this. And at the very least, it should not put locked threads from businesses anywhere near the share menu, let alone direct share. These threads don't accept input, there's no way you can ever share anything to them. It's ridiculous that no one in the Messages team thought of this exception.

Android shouldn't allow this either. No app, built-in or not, system or not, should be able to take all eight spots in the direct share menu hostage for months and months unless you use nothing but that app, plain and simple.

Eventually, all we want is to be able to pick the direct targets we prefer, blacklist apps we never share to, and pin the ones we often use to the top. Plus, we shouldn't need root to be able to disable the silliness on stock Android. All that has been asked before and I'll repeat it again. Maybe someone is listening this time.

14 new and notable Android apps from the last two weeks including SHAREit Lite, SpotWidget, and ...