The news was teased in the YouTube video above, spotted by Chrome Unboxed. The video showcases all three variants and highlights their different sizes, colors, form factors, and unique features. But upon further inspection, we landed on the spec sheet and variant pages for these models, so we know a little more than the video shows.

First is the Chromebook C340-11, a small 11" convertible and the successor to the C330, our current budget pick for Chromebooks. Only 4GB RAM models are listed, but the spec sheet says the max is 8GB so there's hope for a more powerful unit. 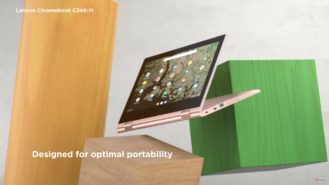 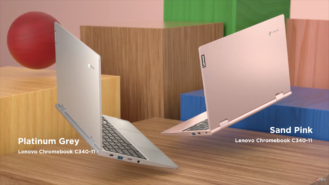 Next up is the larger Chromebook C340-15, also a convertible but with a 15" display. It comes with either a Core i3 or Pentium Gold chip, and offers a full keyboard which is only backlit on the former. It also has stereo speakers, but the two main letdowns are the maximum 4GB of RAM and the presence of only one USB-A port.

Finally, there's the Chromebook S340-14, a 180-degree fold-flat laptop which will be available in different screen configurations, including touch and non-touch units. The models listed only mention 4GB of RAM, but like the 11" C340, the spec sheet says it supports up to 8GB. My favorite part though is the Dark Orchid color — it looks gorgeous.

There's no word yet from Lenovo on availability, price, or launch date for any of these models, but I expect to hear more about them around IFA. However, we do expect the prices to reflect the processor upgrade from MediaTek in last year's models to Intel in this one.

All three Chromebooks have been officially unveiled by Lenovo. We've updated the post and specs above to reflect that both USB-C ports on all models can be used for charging, we also added the correct RAM/storage variants, and the starting prices for each model. The S340-14 and C340-11 are expected to ship in September, whereas the larger C340-15 will ship in October.