If you're looking to grab an Android tablet to perform some menial or easily automated programming tasks or just like having that extra device lying around to play with, it looks like we're in the clearance stage for Lenovo's 10.1" Tab 4. That means you can grab one from either Amazon or B&H for a fair price.

We'll be honest. It ain't the latest — debuting in 2017, the Tab 4 series might just die with Android 8.1. It also ain't the greatest — a Qualcomm Snapdragon 425 with 2GB of RAM and 32GB of storage with room for microSD expansion — nor is it the best in any standard — it has an 800p display and good enough Dolby sound from front-facing stereo speakers. But if you'd rather get a cheap tablet that isn't an Amazon Fire tablet — cheap processor, just about the same amount of RAM, requires the Play Store to be sideloaded — well, we think this is a fine option indeed. 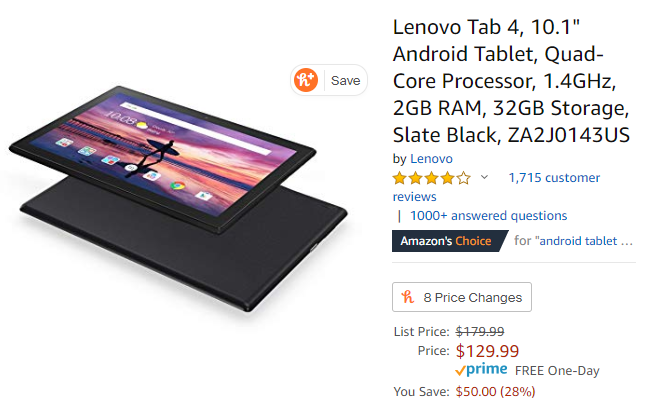 This Wi-Fi only unit has been sitting for weeks on Amazon at around the $164 level, but both Amazon and B&H now have it for what looks to be a final price of $130 — $50 off the current MSRP and $34 off recent pricing. It's not exactly a fire sale, but you might consider this a nice pick-up for the right person or purpose.