Even though we mostly write about Spotify, YouTube Music, and Google Play Music around here, we mustn't forget that Amazon Music also exists. The retail giant sets itself apart from the pack by including a limited selection of content for Prime subscribers, all while also offering a fully-fledged streaming service of its own with 50 million tunes called Music Unlimited. After rumors of a Tidal-like high-fidelity Amazon service, the company sure seems to set certain wheels into motion to allow for better audio enjoyment. In the meantime, an update to the Amazon Music Android app adds loudness normalization and gapless playback.

Albums like Pink Floyd's "The Wall" are best enjoyed in one piece, uninterrupted by breaks or buffering. While gapless audio was the norm for vinyl records and CDs, it's only slowly trickling down to streaming services. It's great to see Amazon implementing the feature in its app, especially since Google never did so for Google Play Music.

Loudness normalization prevents you from jumping out of your chair when the next song in a playlist is significantly louder than the one before it. You can toggle it on or off in Amazon Music's settings, but it's activated by default. Gapless audio, on the other hand, will always be turned on from now on and doesn't have a toggle in settings. 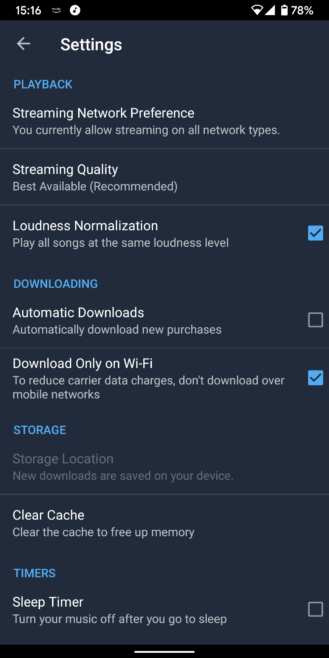 Loudness Normalization sits in Settings and is enabled by default.

The update bearing version number 16.1.12 is currently rolling out to the Play Store. It might take a while until it reaches your device, so be sure to check back regularly if these features are important to you.

Stranger Things 3: The Game has finally arrived on Android